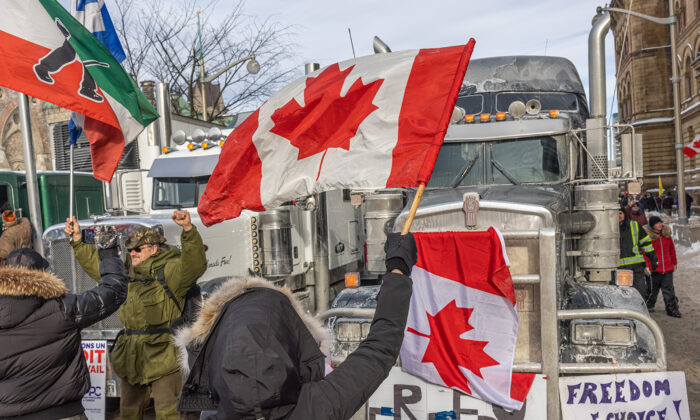 A woman waves a flag and cheers on truckers in protest of COVID-19 vaccine mandates in Ottawa, Canada, on Jan. 30, 2022. (Alex Kent/Getty Images)
Canada

A group of 23 Jewish scientists, doctors, and academics issued an open letter on Friday to Canada’s prime minister, Justin Trudeau, saying they are “deeply concerned” about how he had been describing protesters in Canada who have been demonstrating against COVID-19 mandates and restrictions since late January.

One of the authors of the letter, Stanford Professor of Biophysics Michael Levitt, who was awarded one-third the Nobel Prize in Chemistry in 2013, shared a copy of the letter on Twitter.

“In recent weeks, we have been following the news about the Freedom Convoy 2022 protests that have taken place in Canada. … We witnessed, with mourning concern, how instead of a constructive dialog with the protesters, you adopted a smear-by-association campaign, portraying the protesters as ‘Nazi sympathizers,’ ‘racist,’ and ‘antisemitic,'” the group said in their letter.

“The last incident was your allegation on February 16 that a Jewish member of the Conservative Party was ‘standing with people who wave Swastikas,'” they added.

Trudeau made the comment in Parliament during Question Period on Feb. 16 amid debate over a blockade in Ottawa, and Trudeau’s declaration of a State of Emergency on Feb. 14. Trudeau is the first prime minister to invoke the Emergencies Act since it became law in 1988.

Melissa Lantsman, a Conservative member of parliament for Thornhill in the House of Commons, told the chamber that Trudeau “fans the flames of an unjustified national emergency” by having described the protesters as “‘very often misogynistic, racist,’ ‘women haters,’ ‘science deniers,’ the ‘fringe.'”

She then asked, “So, Mr. Speaker, when did the Prime Minister lose his way? When did it happen?”

House Speaker Anthony Rota followed up, telling the chamber,”I just want to remind the honourable members, including the Right Honourable Prime Minister, to use words that are not inflammatory in the House.” However, Trudeau did not withdraw his comment.

Lantsman, a descendant of Holocaust survivors, said on Twitter that Trudeau falsely accused her of standing with a Swastika. “What a disgraceful statement unbecoming of anyone in public office—he owes me an apology,” she wrote.

In the letter on Friday, the Jewish group of scientists, doctors, and academics expressed disapproval of Trudeau’s recent rhetoric.

“We, an apolitical group of Jewish Israeli medical scientists, physicians, researchers, and legal scholars, some of us second or third generation Holocaust survivors, are deeply concerned by your attempt to stigmatise the Freedom Convoy 2022 protesters as Nazi ideology supporters,” they wrote.

“The important fight against antisemitism should not be weaponized and directed at a legitimate civil protest which aims at restoring fundamental liberties, to what used to be, until not long ago, one of the freest countries in the world.”

The Epoch Times has reached out to Trudeau’s office for comment on the letter.

Late on Friday, Trudeau wrote on Twitter, “Illegal blockades and occupations have threatened businesses, endangered jobs, and obstructed communities for three weeks now. This week, to restore public order and protect Canadians as the situation evolves, our government invoked the Emergencies Act.”

“We’ll continue to make sure municipal, provincial, and federal authorities have the resources they need, and do whatever is needed to keep people safe and get the situation under control—and we’ll make sure your rights and freedoms are protected,” he added. “That remains our top priority.”

Protesters have expressed offense at Trudeau’s recent comments that have portrayed them as racist or hateful, The Epoch Times previously reported. Trudeau previously said the protesters are a “fringe minority’ who hold “unacceptable views” and espouse conspiracy theories.

Protesters on Parliament Hill for the most part have been carrying Canadian flags. Some images were circulating on social media that showed Nazi symbols on flags, while other videos on social media showed protesters telling those holding hateful signs to leave.

Some local reports have also stated that people opposed to vaccine mandates have likened Canada’s mandates to the persecution of Jews by the Nazis.

The protest started in late January as a show of defiance. Truckers opposed the Canadian government’s vaccine mandate that started on Jan. 15 for truckers who often cross the United States-Canada border. It has since evolved into a large movement joined by people from across Canada to oppose different COVID-19 mandates and restrictions.

Early on in the protest, Trudeau has said he wouldn’t be meeting with the protesters—he said he wouldn’t go anywhere near demonstrations “that have expressed hateful rhetoric, violence towards fellow citizens, and a disrespect not just of science, but of the front-line health workers.”

Following the invocation of the Emergencies Act, two lead organizers of the Freedom Convoy protest, Chris Barber and Tamara Lich, were arrested in Ottawa on Thursday. Ottawa’s interim police chief warned on the same day that action to remove Freedom Convoy demonstrators was “imminent.”

Lich, at a press conference on Feb. 14, said that protesters “will remain peaceful” despite the government’s use of the Act.

Despite the arrests, many protesters still remain in Ottawa. In early February, Lich said the protesters won’t be leaving until the government lifts the COVID-19 mandates.

“We’re not coming here to be aggressive or hateful or cause violence,” she told The Epoch Times. “We’re going to be staying in for as long as it takes. We’re not leaving until Canada is free.”

Rahul Vaidyanath contributed to this report.