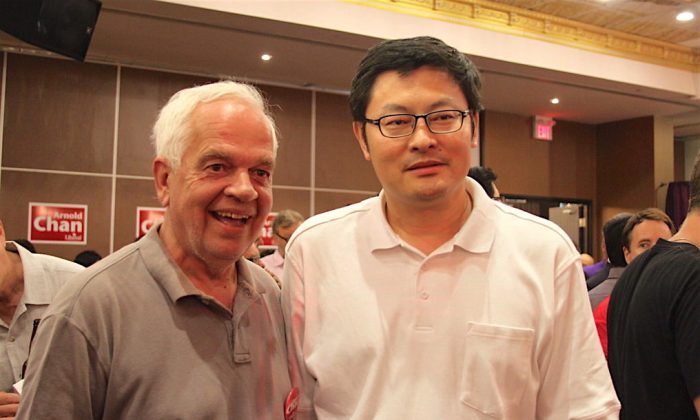 TORONTO—In a surprise announcement, Liberal MP Geng Tan said he will not be seeking re-election in the upcoming October federal election, saying he wants to “spend more time with family and pursue other careers.”

Tan made the announcement on his Facebook page on June 16.

The news comes amid reports in several local Chinese media that the rookie MP had an affair with a woman from the Toronto Chinese community.

Reports about the alleged affair began spreading widely on Chinese media in May, resulting in many articles and commentaries asking for the MP to respond to the allegations, with some reports saying the Prime Minister’s Office had also been contacted for a response.

But neither Tan nor his office have responded to reports of the alleged affair. A person answering the phone at Tan’s office said they had no comment.

Tan is the first mainland Chinese immigrant to become a member of Parliament after winning in the newly created riding of Don Valley North during the 2015 federal elections.

Prior to becoming an MP, Tan held executive positions in a number of Chinese community organizations in the Toronto area that have close ties to the Chinese consulate.

Tan ran into a few other controversies in the leadup to the 2015 election and after becoming an MP.

Ties With Organizations Close to Beijing

Tan, 56, grew up in Hunan Province in southern China. He moved to Canada in the late 1990s, and earned a Master’s and a PhD degree in chemical engineering and applied chemistry from the University of Toronto.

In the early 2000s while at the University of Toronto, Tan was the head of the university’s Chinese Students and Scholars Association (CSSA) for two terms.

A report by Foreign Policy based in part on interviews with CSSA heads and review of internal CSSA documents says that Chinese consular officials regularly communicate with CSSA leaders, and that many CSSAs officially describe themselves as being under the “guidance” or “leadership” of the Chinese Embassy.

Online reports also show Tan meeting with the leaders of the Overseas Chinese Affairs Office, a Chinese regime agency that operates under China’s United Front organization. The United Front is a key organization of the Chinese Communist Party whose mandate includes controlling overseas communities and exerting influence in other countries.

At one point, Tan was the vice chairman of the Confederation of Toronto Chinese Canadian Organizations (CTCCO), which is known for its pro-Beijing stance. He also held the position of vice president at the Chinese Professionals Association of Canada (CPAC).

As previously reported by The Epoch Times, a post on the Chinese regime’s websites states: “Whenever there is something against China’s interests, CTCCO will organize parades to protest or use media to protect the image of China … such as [the time] they protested the mayor of Saint John who raised the Tibetan separatist flag at City Hall on the day when Premier Zhu Rong Ji arrived.”

During a trip to Canada in early 2014, the head of the Overseas Chinese Affairs Office visited a number of pro-Beijing organizations, among them CPAC and CTCCO.

The same year, in a conference held at the Great Hall of the People in Beijing, CPAC received the “Overseas Chinese Organization” award. Attending the event was Chinese Communist Party leader Xi Jinping.

One of the founding members of CPAC is Thomas Qu, the well-connected figure in Toronto’s Chinese community who organized a press conference for former Canadian ambassador to China John McCallum in January, during which McCallum made controversial remarks in favour of Canada freeing Huawei CFO Meng Wanzhou. His remarks ultimately resulted in his dismissal.

Among the people attending Tan’s press conference in 2014 announcing his intention to seek the Liberal Party nomination were then-Ontario cabinet minister Michael Chan, as well as executives of Chinese community organizations with links to Beijing including the CTCCO and National Congress of Chinese Canadians (NCCC). Ping Tan, a longtime executive of CTCCO and NCCC, who was at one time referred to as the consulate’s “go-to-person,” also attended.

Tan also founded the Council of Newcomer Organizations, an umbrella group with close ties to the Chinese Consulate. The organization has been featured on the website of the Overseas Chinese Affairs Office.

During the 2014 Liberal candidacy contest for the 2015 federal election, Tan reportedly got support from Chan to have the nomination date extended so that he could collect more members and votes, according to a report by the Globe and Mail citing party insiders.

The article noted that on the nomination voting day, supporters of Tan’s competitor, Rana Sarkar—who initially was leading—reported seeing Tan’s voters arriving in buses, almost all of them non-English speakers past the age of 60. Tan contested this assertion, saying his voters were both young and old.

Chan, who has since quit politics, was one of the politicians that then-head of CSIS Richard Fadden said was under the influence of a foreign regime in 2010, the Globe reported. Chan has denied being influenced by foreign entities and is suing the Globe.

Among Tan’s more controversial acts while an MP was delivering a letter on behalf of a Chinese-Canadian Liberal Party donor and businessman charged with fraud to the Canadian Embassy in Beijing in 2017.  Embassy staff later passed on the document to the RCMP.

David Mulroney, a former Canadian ambassador to China, expressed surprise at the MP’s conduct, telling the Globe last year when the news about the issue broke that “it is the kind of thing you do in China … when you try to use your prestige or connections to smooth something over. It is not how things are done in Canada.”

Reports about Tan’s alleged affair with a woman who is in a leadership position in a Chinese community organization—which Tan used to also be a part of—have been circulating for some time, but peaked in May after a post on Chinese social media, WeChat, by a person with the same name and matching the description of the woman. The Epoch Times has decided not to name the woman to respect her privacy.

The post’s author chronicled what she characterized as a terrifying pregnancy, giving birth at 52, and said the father of the child doesn’t allow her to talk to anybody. She said she was suffering from depression and at times had looked for ways to commit suicide because of her experience in the affair.

The Epoch Times contacted the woman reported to have had the affair with Tan, but she said she is not giving interviews at this time.

Numerous comments in Chinese posted by readers on Chinese media sites express dismay with Tan’s alleged conduct and said he should resign.

“Dr. Geng Tan, you have the responsibility to clearly state your relationship with the mother and daughter,” wrote Jonathan Fon, a Toronto-based political commentator and vice president of the Canadian Asian Community Think Tank, in an open letter to Tan.

A reporter at the local Chinese-language 51 News said in a report that she asked Tan about the alleged affair directly, but he neither denied it nor admitted to it. Tan reportedly said he had heard similar rumours before, but he didn’t want to cause any impact to the child.