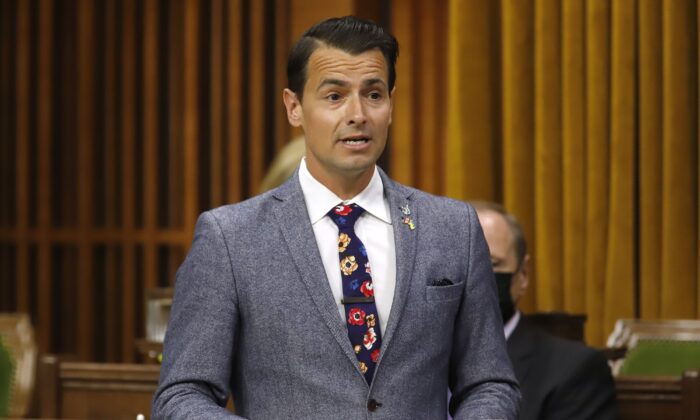 Liberal MP Adam van Koeverden apologized on June 13 for swearing at a Canadian woman living overseas after a heated exchange between the two on social media about the federal travel vaccine mandate.

“Last week I responded in an unacceptable way to a message on social media, and I deeply regret it,” van Koeverden said during question period in the House of Commons.

“I want to apologize to the person I offended and anybody else I let down. I realize that the past two years have been really difficult for a lot of people, but my conduct was unacceptable. We have an obligation to disagree without being disagreeable, and in that regard I failed.”

The former Olympic gold medalist and current parliamentary secretary to the minister of health was responding to a question from Conservative Party MP and health critic Michael Barrett about the federal vaccine mandates.

“Will [van Koeverden] give us a date on when he will end the mandates, or will he tell me to eff off, like he did to one of his constituents?” asked Barrett.

Barrett was referring to van Koeverden’s conversation on Instagram with Ontario-born woman Kate Faith, 29, who now lives in New Zealand and has been unable to visit her family in Canada due to the federal vaccine mandate for travel.

“You guys stand in Parliament and act like these mandates actually serve a purpose?” she told van Koeverden. “I was a teacher who got fired for not taking a jab. Now I am a supply teacher, covering classes every single day because all the jabbed teachers have covid and can’t work.”

After some back and forth, Faith said to Van Koeverden “You are a disgrace of a Canadian. Do the right thing.”

Faith answered she hasn’t been able to see her family since the onset of the pandemic and had to attend her father’s funeral via video link.

“I can’t hug my parents or nana’s because of your Liberal mandates and you have the nerve to swear at me?”

Van Koeverden ended the conversation by saying he “made a mistake in responding to someone like you. Good luck.”

As parliamentary secretary to the minister of health, van Koeverden has taken many questions in the House from Conservatives on vaccine mandates and COVID-19 management.

Some of those exchanges have also been tense at times.

“I am happy to address the question from my colleague and the entire Conservative caucus, which is unmasked today and is pretending that COVID-19 is completely over,” van Koeverden said on March 22.

“Put your mask on,” an unidentified MP told van Koeverden.

“I will put my mask on as soon as I sit back down, like the rest of my colleagues who are committed to following the science. This pandemic is not over,” van Koeverden continued.

Conservative MPs have accused the Liberals of using masks as “theatrics.” Masks are not required in the House when MPs are at their seat, but Liberals have them on at all times, mostly.

MP Todd Doherty released a video on June 9 showing Liberal MPs Iqra Khalid and Julie Dzerowicz not wearing a mask and then putting one on after apparently realizing they were being captured by the House camera filming a colleague between them and the camera.