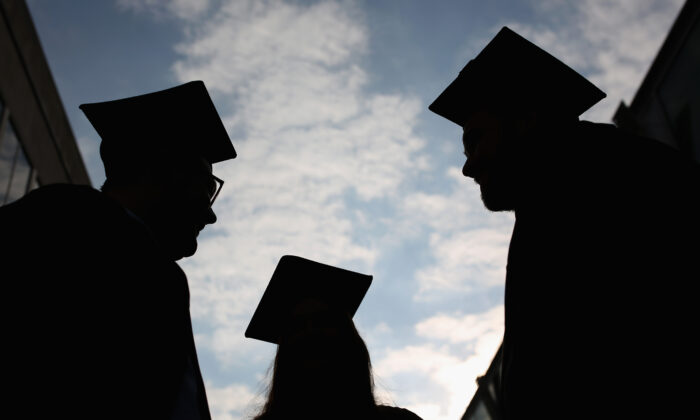 In this file image, students arrive for their graduation ceremony in London on Oct. 13, 2015. (Dan Kitwood/Getty Images)
Viewpoints

Liberal Elites Are a Taboo Society

To get into the elite in America today—and for the past few decades—you need good grades, high test scores, a bachelor’s degree from a top institution, and often a graduate degree as well. The advent of the Information Age rewarded people with a talent for handling words and numbers, and school and college is where you learned those talents and proved you’d done so.

The requirement has stuck, and it’s more binding than ever before.

In the past, the education that one acquired in those select places gave you a set of abstract skills, the kinds of cognitive aptitudes that don’t have politics or religion or morality. Good people and bad people both possess them, atheists and believers, too, libertarians and leftists and conservatives. The pipelines of accreditation historically understood that. They didn’t ask aspirants for whom they voted, where they stood on matters of race and sex and marriage, to which religion they belonged, and what they planned to do with their skills (apart from career goals) once they moved on.

The gatekeepers were liberal insofar as they kept private matters private and left people’s consciences alone. They didn’t mix the ability to do the work—prepare a court case, set a broken arm, teach a class of intermediate French—with externals. That’s what made these institutions liberal in the broad sense of the word. They respected the difference between professional competence and other human traits and dispositions, such as one’s faith.

But of course that circumspection is no more. Universities add to job openings the requirement that applicants submit a diversity-equity-inclusion statement, which amounts to a loyalty oath to progressivist values. Students undergo orientation programs that screen out resistance to identity politics. After the 2020 election, many Trump staffers now on the job market found themselves unemployable because of their association with the administration, even if there was no evidence of those individuals’ malfeasance or incompetence. People lose jobs if they donate to the wrong causes.

This is a sharp departure from the old way. Liberal judgment focused on competence defined in a narrow fashion, contained by the demands of the elite job. In the case of academia, which runs on peer reviews of people and scholarly work, one tried to focus the evaluations on apolitical and impersonal factors. You weren’t supposed to consider the Democratic or Republican leanings of the job candidate. No, you assessed the academic qualifications alone. Is his scholarly work cogent, well-researched, and effectively presented? Does she handle evidence adroitly and draw sound conclusions? Is her teaching effective? You had to accept his premises, then determine how well he followed them through.

It would be wrong to say, “She’s a feminist, and I don’t like feminism.” Instead, you would say, “Is her feminism intelligently articulated? Is it consistently pursued?”

That kind of suspension of bias is no more. The elite police one another’s opinions closely, though those opinions be uttered far from the workplace. They know that to enter the elite, they must do more than demonstrate their high-level knack for words and numbers. A roster of social beliefs has been added to the professional qualifications: a peremptory one. The beliefs are so customary and mundane that I needn’t list them—the usual take on race, sex, gender, immigration, and Trump/Trumpists. To disagree with a single one of them is to transgress the entire elite machinery. Systemic racism, the gender pay gap, transphobia, and so forth, have the force of taboo. The mere whisper of dissent turns you into an untouchable.

This is to say that the liberal elite now operate on inconsistent, fraught, and irrational norms. They embrace and enforce those norms by skipping the old liberal ways of debate, due process, fair hearings, and blind justice. The apolitical criterion of competence now comes second to political correctness. The best teacher in the entire country would never get an academic post in the Ivy League if it came out that she voted for Trump in 2020.

Liberalism claimed to be the basis of an open society, a bustling marketplace of ideas, but you hear leading liberal figures in academia, media, and politics talking less and less about those values. They have shown that they’re willing to let politics infiltrate the running of the institution, the hiring and promotion of personnel, and the evaluation of products, without blinking an eye. The objectivity for which they strove in the past, the neutrality they prized, had no staying power once identity politics gained a foothold. Or perhaps the reality was that liberals insisted on nonpartisan objectivity only when a conservative, traditionalist order of things prevailed.

Liberals idolized dissent but for a time—when the powers that be leaned to the right. Now that institutions are in the hands of the left (in social and cultural affairs), it’s time to shift from dissent to conformity.

So we’re left with a meritocracy that adds to word and number talents an abject fealty to a socio-political hegemony. If you want to rise to the Big Time and stay there, you must bow to the idols of identity. The very thing liberals oppose on principle, namely, a coercive and dogmatic society, they now inhabit and uphold. Remember all that liberal talk in the ’60s about the System, the Establishment, the Man?

Well, they now are the Establishment, and they like it. The elites have as much sympathy for people who’ve never earned a college degree as does the king in “History of the World, Part I” (played by Mel Brooks) for the French peasants. Today’s talk of diversity, justice, and equity is a mask, a screen, a dodge.

The political correctness of the elite serves a purifying function. It’s more about social belonging than political principle. The old screening mechanisms of SAT scores and the college you attended are no longer enough. The dogmas add a fresh hurdle to membership. That’s what really counts. Politics is a handy way to divide us from them, to keep the guest lists properly elite.

In truth, most members of the elite are a lot less political than they sound. They care much more about their personal status than they do about the political direction of the country. And when that status is threatened, as it was in November 2016, they will fight back. Parents at school board meetings, Trump rallies, a convoy forming in the United States … they’re a challenge to the elite. In the coming months, those challenges shall be answered in one way or another.