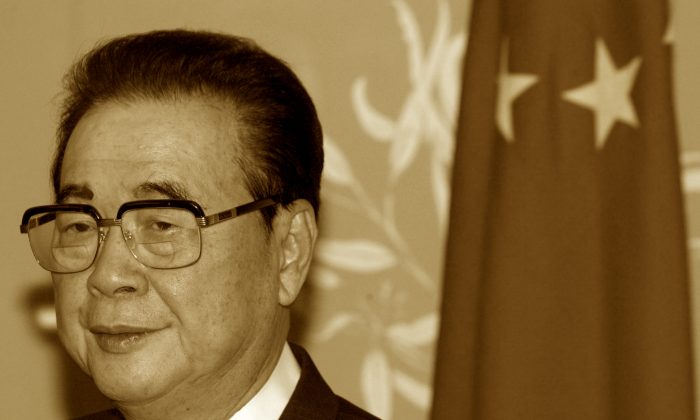 Chairman of the National Congress of the People's Republic of China Li Peng stands next to a Chinese flag in Canberra's Parliament House in Australia on Sept. 16, 2002. (David Gray/Reuters)
Chinese Regime

BEIJING—Former Chinese Premier Li Peng, reviled by rights activists and many in the Chinese capital as the “Butcher of Beijing” for his role in the 1989 Tiananmen Square crackdown, has died, state media reported on July 23.

Li, who was 90, died on Monday night in Beijing, Xinhua said, more than three decades after his government authorized a bloody suppression of student-led pro-democracy protests in the early hours of June 4, 1989.

Xinhua said Li died following unsuccessful treatment for an illness, which it did not specify.

Along with then leader Deng Xiaoping, Li was seen as an unapologetic hard-liner responsible for ordering the assault that crushed weeks of demonstrations by protesters in central Beijing.

His declaration of martial law over parts of Beijing on national television in the weeks before tanks and troops swept the square of protesters made him one of the most prominent faces of a crackdown that continues to color global perception of China‘s Communist Party leadership.

The death toll given by officials days after the crackdown was about 300, most of them soldiers, with only 23 students confirmed killed. China has never provided a full accounting of the violence, but rights groups and witnesses say the figure could run into the thousands. The topic is taboo in China.

Li remained premier until 1998, as China navigated its way through the international opprobrium and sanctions imposed by Western countries after the violence.

While Deng’s legacy has been burnished by his subsequent role as the driver of economic reforms that propelled China‘s dramatic rise, Li’s image abroad remains tied to the 1989 crackdown.

Comments on Li’s death on Chinese social media appeared to have been heavily censored, though some people made oblique references to the Tiananmen protests.

Analysts said they did not expect Li’s death to have any political impact.

Born in Sichuan Province in China‘s southwest, Li was orphaned as a toddler when his father, Li Shuoxun, an early Communist Party revolutionary, was killed by Nationalist forces.

He was raised among China‘s Communist Party revolutionaries, the ward of Premier Zhou Enlai, who, along with Mao Zedong, was among the leaders who founded the People’s Republic in 1949. Li would become one of China‘s most powerful so-called princelings, or members of elite families that continue to wield influence.

Zhou sent Li at age 12 to the Communist heartland base of Yan’an to study, and Li formally joined the party at 17. As the Communists drew close to victory in their civil war against the Nationalists, Li went to the Soviet Union to study.

A hydropower engineer by training, Li rose through the ranks as an energy official. He was a champion of the Three Gorges Dam project on the Yangtze river, a massive feat of engineering that became part of his legacy. In 1994, as premier, he oversaw groundbreaking on the dam.

But the 185-meter (607 feet) dam also has been one of China‘s most expensive and controversial projects, submerging villages, displacing millions and disrupting ecosystems.

The dam project became a lightning rod for what critics saw as China‘s growth-at-all-costs economic model, coming in billions of dollars over budget, and was later linked to embezzlement and nepotism scandals, according to the national audit office.

By Michael Martina and Tony Munroe