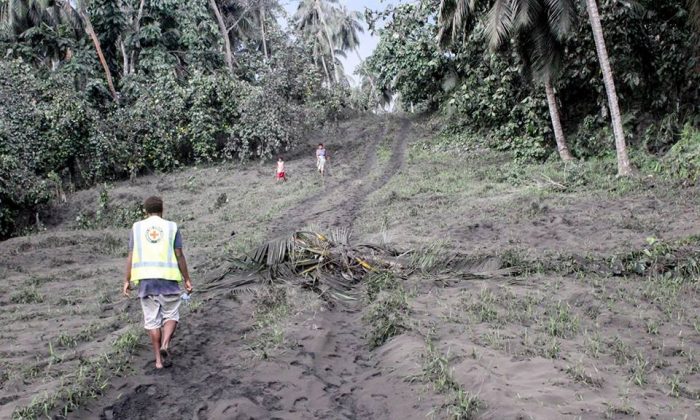 The landscape in Sakao has been transformed by the latest ash fall, plantations of coconuts, gardens, roads, water sources on the creeks were covered by thick ashes. Water supply and access is already a challenge. Nicholson Naki/Vanuatu Red Cross Society)
Asia & Pacific

A volcanic eruption has smothered the Vanuatuan island of Ambae with thick ash leading to mass evacuations.

Vanuatu Meteorology & Geohazard Department (VMDG) announced on July 21 that the Ambae volcano is now at Level three, the minor eruptions category. MP Ralph Regenvanu sent out a message on social media that the cabinet has reimposed a state of emergency and compulsory evacuation of the entire population of Ambae.

Two evacuation centers are hosting 372 people, while another 107 people have left south Vanuatu to Santos on the MV Princess Mary.

Sustained emissions of ash have made it difficult for the Vanuatu Red Cross Society to evacuate people in the south of the island. They said that the situation is worsening, the volcanic ash is reducing their visibility and that some roads can no longer be accessed.

Garae has confirmed that mass evacuation in the south is underway as villages in Ward 2, 3, 4 are no longer habitable.

“We tried to travel to the South today but we have to turn back, because trees are falling, visibility is very very poor, we cannot see far more than 2 meters. The situation is getting worse now in the South, people are now leaving their homes and move to Evacuation centers in the East,” said Red Cross disaster management coordinator and Ambae disaster response operation controller, Augustin Garae.

An emergency response plan as been enacted, whereby two Vanuatu Red Cross teams have been bringing humanitarian aid to the west of Ambae Island by distributing non-food items to villages.

The Danger Zone is now set within a 1.9 miles (3 kilometers) radius of the volcanic vents, anyone within this area is vulnerable to flying rocks, volcanic gases and ashes.