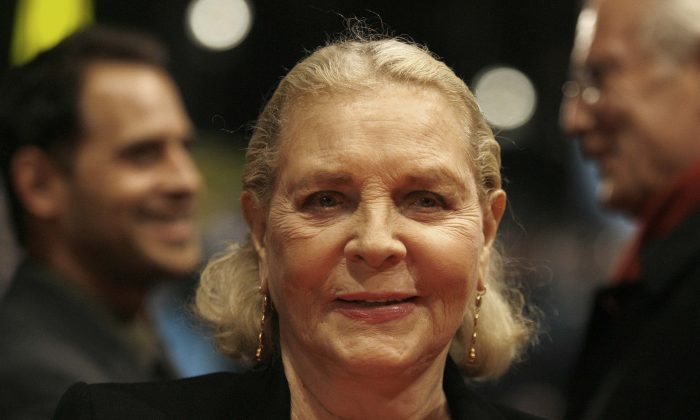 U.S. actress Lauren Bacall arrives for the screening of her movie 'The Walker' at the 57th International Film Festival Berlin 'Berlinale' in Berlin on Tuesday, Feb. 13, 2007. (AP Photo/Markus Schreiber)
US

Who are Lauren Bacall’s kids?

A number of sources have reported that Lauren Bacall has passed away aged 89.

The 1950s Hollywood star was best known for her roles in “The Mirror Has Two Faces,” “Designing Woman,” and “To Have and Have.”

Stephen Bogart is a producer and actor, and is known for Bogart: The Untold Story (1996), Humphrey Bogart: You Must Remember This… (1997) and This Last Lonely Place (2014), according to iMDb.

In a 2013 interview with Palm Beach Post, Stephen mused about why he didn’t take to acting like his parents: “I wanted to stay out of the limelight.

“Looking back, I ran away from who I was. I never gave anybody my last name unless I had to; I wanted people to like or dislike me for who I was.

“I never hung around with movie stars.

“All my friends are real people, not that movie people aren’t real, but you know what I mean.

Stephen’s sister Leslie was named after Leslie Howard, a fellow actor and close friend of her father Humphrey Bogart.

Actress Lauren Bacall (C) and her two children Stephen (R) and Leslie (L) by former husband Humphrey Bogart pose in front of a stamp commemorating his life 31 July during a stamp unveiling ceremony in Hollywood. The stamp portrait is from the movie poster for the 1946 film ‘The Big Sleep’. Bogart died 40 years ago and is celebrated in the Hollywood Legends stamp series. (MIKE NELSON/AFP/Getty Images)

At 16, Leslie had aspirations to be a model, according to blogger shewasabird.

She married Erich Shiffmann in 1990, and in 2004 she became a nurse and yoga instructor, according to iMDb.

Lauren Bacall got married to Jason Robards, Jr. after Humphrey Bogart’s death, and they have a son, Sam Robards (December 16, 1961).

Actor Sam Robards attends the Cinema Society with Alice+Olivia screening of ‘The Art of Getting By’ at Landmark Sunshine Cinema on June 13, 2011 in New York City. (Photo by Stephen Lovekin/Getty Images)

Robards later married Sidsel Jensen in 1997, and they have together ever since.