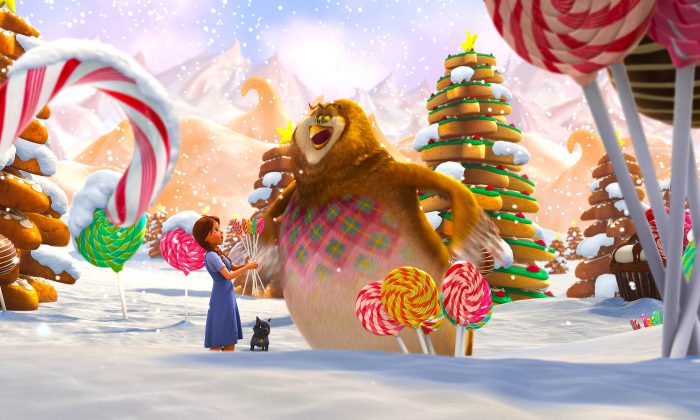 Some illustrations are as classic as the classic writing they illustrate. “The Wizard of Oz,” “The Wind in the Willows,” and “Winnie the Pooh” are a few examples of powerful writer and illustrator collaborations.

“Legends of Oz: Dorothy’s Return” is a 3-D musical cartoon starring Lea Michele of “Glee”; it’s neither Pixar-esque nor picturesque. It’s a kitschy update of the Oz-related classic, “Dorothy of Oz.” But kids don’t make these fine distinctions. You do. So you can take a siesta.

Dorothy’s back from Oz. But wait! Here come some more severe-storm warnings, and before you know it, Dorothy’s sucked up again!

But not in a tornado because that would be stale and redundant. She’s sucked up in a rainbow. A “rainbow-hoover” they’re called. They’re very nice! Kids will like them. You will snore.

She meets Wiser the Owl, voiced by Oliver Platt. He’s fat, friendly, and can’t fly. Might be too talkative for tots. Who else you got?

The Jester! Voiced by Martin Short. The creep brother of the deceased Wicked Witch of the West, he turns all his enemies (including Glinda the Good) into puppets. Puts them in glass cases on display. Stop this fiend!

Dorothy, Toto (remember Toto?), and Wiser the Owl are on the way to Oz, having been summoned by her old buddies, Scarecrow, Tin Man, and Lion, to save their world from the Jester.

We’re Off to See the Jester

The Jester routes the traveling crew through Candyland, where you’re not supposed to eat anything. Wiser lives in that general vicinity. Wonder why Wiser is weighty?

But, oh man—the Jester sneakily changes the signs! He makes them say, “Eat all this candy!” and so we have a rockin’ musical number about a munchable candy landscape. Are depictions of out-of-control candy-munching cloying? Yes! Is the music also cloying? Yes! Keep sleeping.

They get caught in Candyland by Marshal Mallow (Hugh Dancy), a marshmallow-looking fellow. He drags them, in licorice handcuffs, before Judge Jawbreaker (Brian Blessed).

They don’t want to let fat Wiser off easy, because it’s his 499th arrest for pigging-out in candy-park, but they drop the charges because Dorothy’s a celebrity. Yay! Cheers from the peanut gallery (all actual peanuts) and from Dorothy’s peeps, who are Easter-candy chicks. Chicks go “peep!” See?

Among other random adventures, Dorothy and crew make it to the Emerald City to help her old buddies. Do they defeat the Jester before Dorothy gets rainbow-hoovered back to Aunty Em and Uncle Henry?

Out With the New, In With the Old

You know … it’s not great, this one. The exposition is perfunctory, and there’s no buddy chemistry between the main players. It’s hard to become invested in these characters.

The most creative part is the pre-film credit roll. Pieces of flotsam and jetsam fly out of a massive twister, displaying the names of cast and crew. A burlap bag names Dan Aykroyd as the Scarecrow … yeah. Probably one example is enough. Wouldn’t want to ruin the best part for you.

In terms of an aesthetic, it’s just … complacent. It would be nice to see a film honoring the original illustration by W. W. Denslow of the first “Oz” books. Those illustrations did just as much as L. Frank Baum’s writing in terms of creating the magical atmosphere of the original Oz. “The Wonderful Wizard of Oz” was published in 1900, and the Americana captured in those illustrations was very period, very dust-bowl Kansas.

Disappointing is the shift, musical-wise, reflected in Broadway’s transition from the old Tin Pan Alley-style music to modern rock-opera-type musical numbers. It works in Broadway hit musicals like “The Book of Mormon,” but here all becomes chintzy and cutesy.

Would that a Peter Jackson-type director were overcome by a muse with an over-arching vision of how to unify all 40 “Oz” books into a Tolkien-esque (and Pixar-esque) masterpiece, guided by the illustrative genius of W.W. Denslow.

It’d be a vision that transports children back to a more magical, innocent time. You’d want to go too. And stay awake.