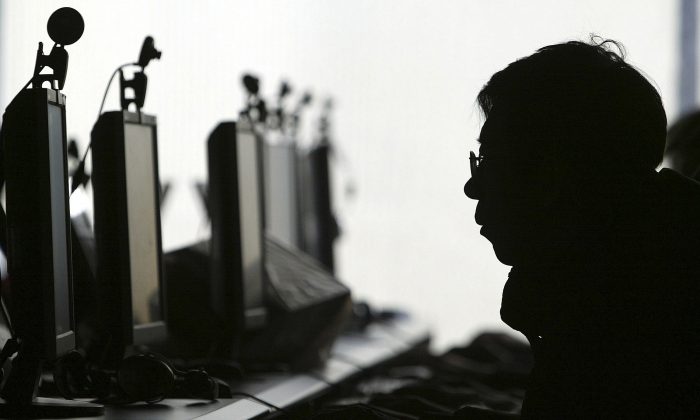 A person uses a computer in an Internet cafe in Shenyang, China, in this file photo. (AP Photo)
China Human Rights

A prominent Chinese IT professional, who for more than 10 years posted on his blog deep-dive analyses of the CCP (Chinese Communist Party) without punishment, was reportedly whisked away by Shanghai authorities and is enduring brutal interrogation.

“Program Think,” a pseudonym he adopted on Blogspot, has vanished since his last blog posts on May 9. The blogger ran afoul of Chinese authorities by exposing the communist regime’s elite families and propaganda tactics, as well as introducing methods for bypassing the Great Fire Wall (GFW), an advanced internet censorship system in China.

The Epoch Times recently learned from a person familiar with the matter that the anonymous blogger was tracked down and arrested by the police in Shanghai, China’s financial hub, in early May. Radio Free Asia was first to report on the blogger’s arrest.

“He is enduring brutal tortures,” said the man who has kept a close eye on Chinese dissidents and activists for years. He gave the surname Zhao in the interview with The Epoch Times.

Zhao claimed that reliable sources told him the blogger is being held in custody by police. Considering the safety of the sources and himself, he chose not to disclose more personal information.

The authorities are sure to impose stiff sentences very soon, he added in the interview on June 16.

Zhao hopes the voice of media outlets and the international community acts as a deterrent to the authorities, reducing the imprisoned dissident’s suffering.

To evade the CCP’s surveillance and aggressive hacking, the blogger mentioned in 2019 that all information related to his identity had been concealed, as he writes or contacts under the pseudonym. Therefore, The Epoch Times could not directly verify his arrest.

But the blogger noted in 2017 that if he did not update the blog for over 14 days, he likely has been arrested or severely injured. As of Wednesday, his blog has remained silent for 40 days.

The anonymous author, dubbing himself as “an enemy of the Party Country” on his blog, had secured his personal information in China for 12 years under the Chinese regime’s strict surveillance and internet.

“He is a legend,” Zhao said on the phone call through the internet.

On his Blogspot, Program Think covered a number of topics that could stir up the regime, including details of the Tiananmen Square massacre, Hong Kong’s pro-democratic protests in 2014 and 2019, and the corruption of the elite families in China.

Among them is personal and business information on the “Princeling” offspring of Chinese leaders and high-ranking officials, mainly sourced from the regime’s websites and Western mainstream media that had been blocked in China.

Soon after it was posted on GitHub, a warning message from the Cyber Security Association of China required the blogger to remove a post labeled “malicious slander” of Chinese leader Xi Jinping.

“He is the man the CCP most wanted to crush,” Zhao added.

Identifying himself as an IT professional, Program Think’s original intention was to introduce IT knowledge and methods for bypassing the GFW, as his pen-name implies.

However, in 2009, the mandatory pre-installation of a content-censoring software and the blocking of several leading websites, including Bing, Twitter, and Blogspot, prompted him to write articles about politics.

He quoted Martin Niemoller’s confessional prose, “First they came…,” to explain the change of his focus on the blog.

“First they came for the socialists, and I did not speak out—
Because I was not a socialist.

“Then they came for the Jews, and I did not speak out—
Because I was not a Jew.

“Then they came for me—and there was no one left to speak for me.”