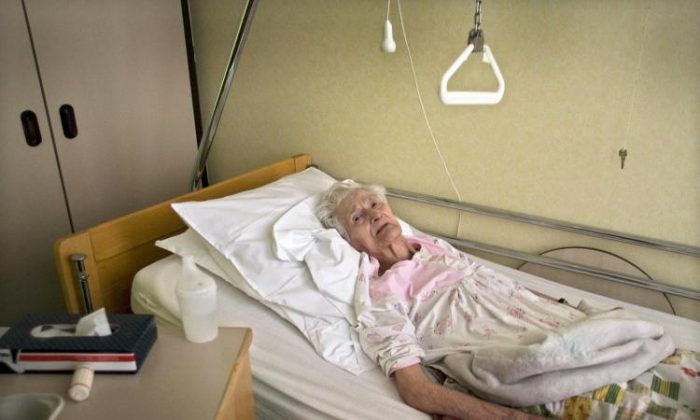 The Western Australian Parliament will begin debating the highly controversial Voluntary Euthanasia Bill on March 8. Under the measure, a request for the administration of euthanasia would only apply to a person who has a terminal illness that will cause death within two years and is experiencing debilitating pain. (Jorge Dirkx/AFP/Getty Images)
Viewpoints

Here’s the advocacy scam: “Death with dignity” activists push suicide facilitation for some people—but still claim to oppose suicide per se because they call doctor-prescribed death by the euphemism of “medical aid in dying” (MAID).

Then, they claim that the availability of MAID will reduce rates of “premature deaths” because people with serious illnesses will feel comforted by the ready availability of an easy way out and thus remain longer among the living.

Finally, to assure that death statistics support this claim, laws allowing assisted suicide are written to redefine doctor-prescribed death as not legally suicide. Some statutes even go so far as to require the doctor who signs the death certificate to falsely report that the cause of death was the underlying medical condition, rather than an intentional overdose of barbiturates. The point is to artificially reduce official suicide rates as the actual number of self-killings increases.

Such shameless sophistry. Suicide describes what’s done, not why it’s done. Besides, every suicidal person would want to live if not for the reason why they want to commit suicide. If the mother’s child hadn’t been hit by a car, she would want to live. If the businessman’s enterprise hadn’t collapsed, he wouldn’t be thinking about killing himself. If the person didn’t feel hopelessly addicted to alcohol, suicide would never have entered his mind.

Still, the great advocacy scam has convinced many people to separate assisted suicide in their minds from suicide per se. But that dichotomy is now collapsing under the weight of data. Not only are suicide rates increasing to crisis levels as more jurisdictions legalize assisted suicide, but an explicit association has been established between these concurrent phenomena.

A peer-reviewed study was just published in the Journal of Ethics in Mental Health that compared suicide rates in four European countries that permit euthanasia/assisted suicide versus demographically similar neighboring countries that don’t. And guess what? Not only are increased suicide rates associated with the legalization of assisted suicide/euthanasia, but the hypothesis that premature deaths will be reduced was thoroughly debunked.

Specifically, the study concluded that there aren’t “any grounds” for believing that legalizing euthanasia/assisted suicide is “an effective form of suicide prevention.”

“There is no evidence that it would be beneficial in relation to suicide prevention overall,” the study reads. “If one considers the community as a whole, it is not the prohibition of EAS [euthanasia/assisted suicide] but the introduction of EAS that is associated with ‘evidence of premature death.’”

This isn’t to say that assisted suicide is the sole cause of the suicide crisis. Our nihilism has many parents. But it surely is a contributing factor.

Should we be surprised? Stripped of its patina of compassion and behind the movement’s euphemistic deflections, euthanasia advocacy promotes suicide. Legalization also gives the state’s imprimatur to self-killing as a legitimate solution to human suffering. Popular culture amplifies this destructive message ubiquitously in novels, television programs, and movies.

The media also boosts suicide by lauding hastened death as empowering and “dying on one’s own terms.” Indeed, consider the sad case of Brittany Maynard, a young woman who committed assisted suicide after contracting terminal brain cancer. She wasn’t only the subject of repeated cover stories in People Magazine, but was named by CNN as one of 2014’s “most extraordinary people.” To say the least, the message communicated is decidedly not anti-suicide!

Even more worryingly, contemporary assisted suicide advocacy increasingly includes expanded categories of suffering people. An article just published in the Journal of Eating Disorders—a respected medical publication—urged that anorexia patients “who are severely physiologically compromised, and whose end-of-life suffering results from both psychological and physical pain, should be afforded access to medical aid in dying in locations where such assistance has been legalized—just like other patients with terminal conditions.”

In other words, instead of psychiatrists working unequivocally to help keep these eating disorder patients alive, they could instead help kill them.

There’s a word for that: abandonment. Moreover, once we start permitting one category of mentally ill people to receive suicide facilitation, what reason is there to believe that it would stop with them? Indeed, the article notes that more people die from opioid addiction each year than anorexia. If that’s the case, logic would require expanding assisted suicide to include people with drug addictions so implacable that they see death as their only way out. Think of the irony. An intentional overdose of opioids would be deemed as a “treatment” for intractable addiction to opioids. The mind boggles!

The elderly and people with dementia are also being targeted by suicide pushers as proper subjects of facilitated death. Compassion and Choices—which used to be known more honestly as the Hemlock Society—teaches elderly people how to commit suicide by self-starvation—known in euthanasia movement parlance as “voluntary stop eating and drinking” (VSED). The site describes this as a “natural death,” but of course, it’s really a form of suicide—facilitated by a doctor who prescribes drugs to blunt the agony caused by self-dehydration and starvation.

Some bioethicists even argue that nursing homes and caregivers should be legally required to starve patients who willingly eat and drink if they have serious dementia and have previously ordered themselves starved in an advance medical directive. As with the phony argument that legalizing assisted suicide prevents suicide, advocates claim that allowing people to order themselves deprived of sustenance would prevent earlier suicides.

“To avoid the problem of premature death, many have proposed that individuals complete advance directives that instruct others to stop hand feeding,” bioethicist Thaddeus Mason Pope wrote. “This is known as ‘advance VSED’ or ‘SED by AD.’”

Here’s the bottom line. The more a society becomes in favor of some suicides, the more normalized suicide will become. Unless we recognize that the proper answer to suicide ideation is suicide prevention—for everyone, not just some—the “right” to commit suicide could become as fundamental as the right to life.

The victims of such a nihilistic mindset will be the elderly, people with disabilities, the mentally ill, and the seriously sick in an ever-widening swath of premature deaths.