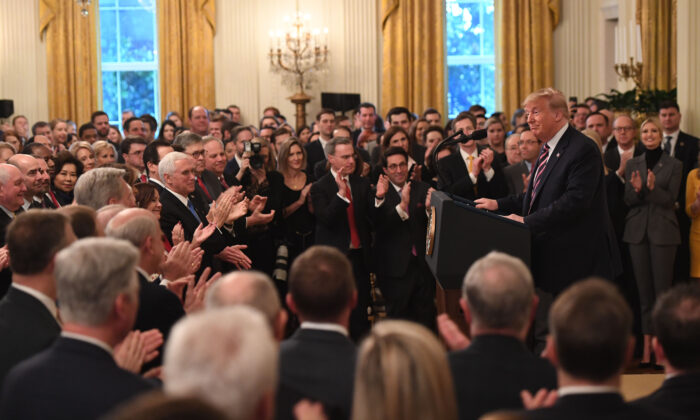 President Donald Trump speaks about his Senate impeachment trial in the East Room of the White House in Washington on Feb. 6, 2020. (Saul Loeb/AFP via Getty Images)
Viewpoints

Legal Lessons From the Impeachment Process

The impeachment ordeal is finally over, at least for the time being. It was the third such trial in American history. The first two were of Presidents Andrew Johnson and Bill Clinton. (Richard Nixon resigned before he was impeached.) As happened with Johnson and Clinton, the Senate decided not to remove President Trump from office.

At one point during the hearings, a student asked me to compare the rules of evidence being used in the Senate to the Federal Rules of Evidence that I had taught him last semester. I had to acknowledge that they were not the same. In fact, many things about the impeachment trial were unique, but a close examination of the process might provide some important lessons for the future.

The central focus of this case was the telephone call of July 25, 2019, between U.S. President Donald Trump and Ukrainian President Volodymyr Zelensky. The charge was that Trump, for political reasons, improperly pressured Zelensky to investigate former Vice President Joe Biden and his son Hunter regarding corrupt business practices in Ukraine.

The White House released the transcript of the call, so there was not much argument about the words that were spoken. Rather, the issue related to the intent behind those words.

The Democrats argued that the president threatened to withhold aid to Ukraine unless and until authorities from that nation opened the investigation. The Republicans argued, to the contrary, that there was no linkage between the request and the aid; there was no “quid pro quo.” The difference between the two sides more or less boiled down to Trump’s intent.

Impeachment is not precisely the same as a criminal trial, but it is similar, especially in this way. To establish a crime, the prosecutor must prove all of its elements. With rare exception, crimes require the prosecution to show both the actus reus, the act part of the crime, and the mens rea, the mental part of the crime—the intent. Thus, theft requires taking property knowing that it doesn’t belong to you. If you accidentally pick up an umbrella thinking it’s yours, you haven’t committed a crime. You should return the umbrella once you realize what you’ve done, but you didn’t commit theft when you took it.

In some cases, intent is fairly easy to infer, but not always. Do you remember the Rodney King incident? Several white police officers were caught on camera seriously beating an African American man (Rodney King). The officers were tried in California state court for police brutality, and they defended by saying that their intent was not to hurt King but to keep him down on the ground, as they feared that he presented a threat to them.

The film was horrifying, but the jury had to make a judgment about the officers’ mental state, not just their actions. The jury acquitted, and riots followed. Those who thought the verdict unfair had seen the video, but few had heard any evidence related to the mens rea, and that had been the key to the defense. (In a later federal trial, two officers were convicted of having violated King’s civil rights.)

The mental aspect was also the key element in the Trump impeachment. The president called the conversation “perfect,” but others—reading the same words—thought that he was trying to coerce President Zelensky, who denied feeling coerced.

Rep. Adam Schiff (D-Calif.) offered his own interpretation of the telephone conversation, changing Trump’s words in some cases. Although he was criticized because his reconstructed conversation could be misunderstood, it was actually his way of relating his belief about Trump’s intent.

If impeachment is approached like a criminal case, President Trump is entitled to the presumption of innocence, and the prosecution must prove his guilty mind. In fact, in a criminal case, that would have to be established beyond a reasonable doubt. Carrying that burden is difficult, but it should be hard to put a citizen into prison, and it should be difficult to remove a duly-elected government official from office. It’s therefore not surprising when juries (or senates) acquit.

Another big issue with the impeachment process is defining exactly what type of conduct can lead to a conviction. The Constitution refers to “high crimes and misdemeanors.” On its face, that phrase seems to be limited to criminal activity, but most commentators say that a president can be impeached for intentional deeds that subvert the Constitution and involve an unforgivable abuse of the presidency.

Schiff offered some examples of non-criminal conduct that might lead to removal from office, including giving away Alaska and leaving administration of his office to others. Although he again drew criticism from the president’s defenders, it seems like he made a good point. Some non-criminal conduct probably should lead to conviction and removal.

One right given to criminal defendants but denied to the president in this case is the Sixth Amendment right to confront opposing witnesses. The prosecution in this case called witnesses to testify before the House of Representatives. They weren’t subjected to cross-examination by the president, nor was the president permitted to call witnesses.

The Senate, of course, could have authorized the calling of witnesses during that part of the proceeding, but much like a “motion to dismiss” in a criminal case, the Senate voted to end proceedings without hearing testimony. It seemed quite clear that the prosecution was not going to get the super-majority vote, so the senators brought the process to an end. (Note to Brad Pitt: Congress could have called John Bolton during its proceeding and could still call him to testify before a committee.)

The final point to note for the future relates to the Sixth Amendment protection against double jeopardy. In a criminal case, if a defendant is found not guilty, he or she may not be tried again for the same offense. (Note: federal and state offenses are deemed distinct; thus, the second trial of the police officers in the Rodney King case.)

That prohibition on a second trial likely doesn’t apply to a presidential impeachment, and it seems that many of President Trump’s critics are determined to impeach again. Of course, one has to think that American voters would not appreciate traveling down this road again anytime soon, unless very strong and disturbing evidence emerges. After all, they’ll have the opportunity to decide who should be in the Oval Office later this year.