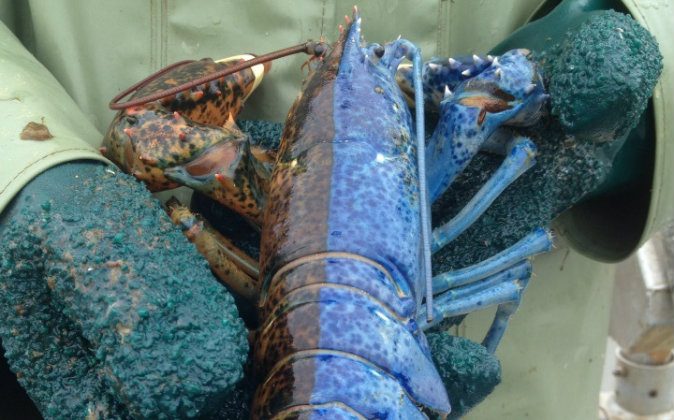 A two-toned gynandromorph (half male, half female) lobster caught off the coast of Newfoundland, Canada. (Via Okanagandude/Reddit.com)
Science

This lobster is half female, half male—split right down the middle, as seen by the two-toned coloring. It was caught by a fisherman off the coast of Newfoundland, Canada, last year and the photo was posted on Reddit by his nephew.

The chances of catching such a two-toned lobster are 1 in 50 million to 100 million, staff at the Mount Desert Oceanarium said when a similar lobster was caught in Bar Harbor, Maine, in 2006.

It may be rare to catch such a lobster, but this phenomenon is found not only in lobsters. It is also found in butterflies and numerous other organisms.

Not all two-toned lobsters are part male and part female (gynandromorphs).

A U.S. National Museum bulletin from 1959 looks at the recorded cases of two-toned lobsters in history.

Only two of the lobsters, one caught in 1730 and another in 1919, were definitely described as being half male and half female.

What Do You Think These Strange-Looking Natural Objects Are? CLICK HERE TO FIND OUT.