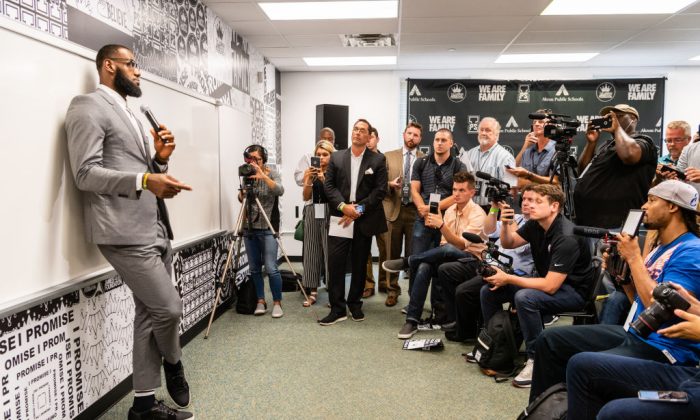 LeBron James addresses the media after the opening ceremonies of the I Promise School on July 30, 2018 in Akron, Ohio. The School is a partnership between the LeBron James Family foundation and the Akron Public School and is designed to serve Akron's most challenged students, July 30, 2018. (Jason Miller/Getty Images)
Entertainment News

LeBron James, who missed 83 days of school in fourth grade, just had the greatest moment of his life. The NBA superstar opened the I Promise school for at-risk children in Akron, Ohio on Monday, July 30.

The school was established by the LeBron James Family Foundation (LJFF) and Akron Public Schools, beginning with a total of 240 students who are at risk of falling behind in their studies—120 in third-grade and 120 in fourth-grade.

Choosing Not To Go To School

For most of James’s childhood, he lived with his mother, Gloria, who gave birth to him at 16 while his father was in jail. James would choose not to go to school and instead stay at home, play video games, and buy snacks from the corner store using his mom’s food stamps.

Meanwhile, Gloria quit her job at Payless shoes and would sometimes go out, leaving James to look after himself. After years of moving around, a youth football coach, Frank Walker, suggested to let James stay with his family while Gloria lived with her friend and still see her son on the weekends, ESPN reported.

Walker would teach him to dribble and do left-handed layups. To shorten James’s basketball learning curve, Walker signed him on to his basketball team for 9-year-olds and enlisted James as an assistant coach. When the Walkers enrolled him in Portage Path Elementary, the school was implementing holistic learning. All students would participate in music, art and gym—those were James’s favorite subjects, so he never missed a day of school that year.

To ensure that his new students at I Promise don’t skip school, like James did in fourth grade, the principal and teachers gathered them at the staircase and recited the I Promise pledge for the first time.

@KingJames 3rd graders are reciting the #IPROMISE for the first time in their new home with Principal Davis! ❤️? #WeAreFamily pic.twitter.com/Gitytnq31t

Reading Skills and Poverty in Third-Grade

Although the third and fourth-grade are the only grades currently available at I Promise, the first and second grades will be added in the following year. I Promise is set to run from first to eighth grade by the year 2022.