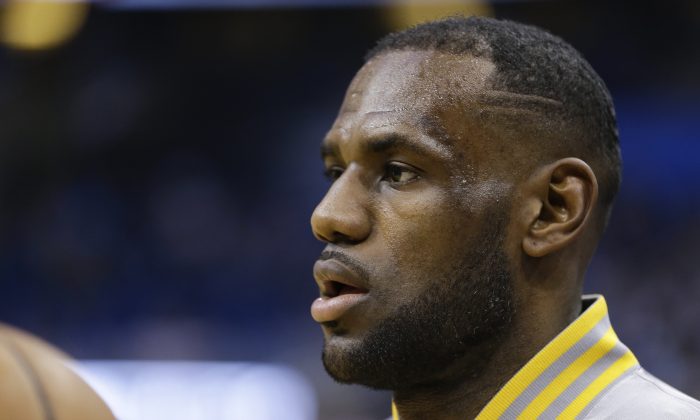 LeBron James will likely play on Monday night against his former team despite tweaking his knee on Sunday against the Magic.

James’s status against the Heat was uncertain after he fell awkwardly on his right leg against the Magic.

James played most of the rest of the game, but told reporters afterward he wasn’t sure about his status for Monday. “I hope so, we’ll see how it goes,” he said when asked he thought he’d play against the Heat in Miami, reported the Northeast Ohio Media Group.

“Scary moment for myself, obviously,” James said. “I can’t get my foot up from underneath me. I was able to play through it, and obviously we’ll see how I feel tomorrow and we’ll go from there. I haven’t had one of those falls, I don’t know if it’s ever, but it’s been a pretty long time.” However, a new report says that James will likely play.

“For all the talk about LJ tweaking his knee, I’m told he has no injury and is active,” said Chris Broussard of ESPN. “Expect him to play tonight in Miami.”

On the other hand, Broussard’s ESPN colleague Michael Wallace came in with a different view.

“There’s also a chance LeBron sits out Monday as a precaution after tweaking his right knee midway through Sunday’s win in Orlando,” Wallace said.

James has not made such a pronouncement as of yet, nor has anyone with the Cavs such as coach David Blatt.

Cleveland appears more and more likely to have gained a hold on the No. 2 seed in the Eastern Conference, and will likely beat the Heat, but Cleveland is a much worse team without LeBron on the floor.

The Cavs already held out James for two weeks earlier in the season, and held out Kevin Love on Sunday for rest. The team will likely rest other key rotation players such as Kyrie Irving for a game or two as the playoffs near.