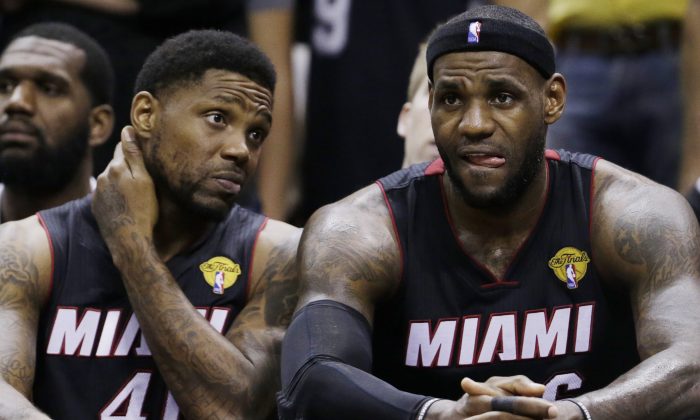 Miami Heat forward Udonis Haslem (40) and LeBron James (6) watch action against the San Antonio Spurs from the bench during the second half in Game 5 of the NBA basketball finals, on Sunday, June 15, 2014, in San Antonio. The Spurs won the NBA championship 104-87. (David J. Phillip)
NBA

After a highly disappointing NBA finals LeBron James has decided to opt out of his contract with the Miami Heat. This does not necessarily mean that James is going to leave the Heat but it certainly opens the door. The last time James decided where to play he formed a super-team with his pals Dwyane Wade and Chris Bosh. James now has a chance to redo his decision, but this time he is more experienced in both life and basketball and he understand more fully the ramifications of his decision.

When James decided to team up with Wade and Bosh he envisioned that the combination of their great talents would overwhelm the rest of the league and lead to multiple championships. They won two titles in four years but were routed by San Antonio in this year’s finals.

Currently Miami’s roster does not have very much to offer LeBron any more. Bosh did develop a very nifty three-point shot this season that helps the team spread the floor but Wade appears to have lost the explosiveness that makes him a special player and his lack of a reliable three point shot make the Heat much easier to defend when he’s on the floor. The rest of the Heat roster is retiring, aging or just inconsistent and it is time once again for LeBron to survey the league and find a roster that he can lead back to championship form. Salary cap notwithstanding, the major qualifications are that the team could immediately compete for a championship with addition of James, already have at least one superstar and play in an attractive city.

8,9, 10 and 11: The Oklahoma City Thunder, Portland Trailblazers. Memphis Grizzlies and San Antonio Spurs (especially the Spurs) all have win now rosters. However, their small markets would hurt James’s considerable earning power off the court.

7: The Dallas Mavericks simply do not have enough defensive help.

6: The Phoenix Suns had a really exciting year last year but they still did not make the playoffs, let alone demonstrate that they have the assets to compete for a title.

5: The Washington Wizards have two great up and coming talents in Bradly Beal and John Wall, a solid supporting cast and nice fitting roster for James. Beal and Wall are a few years from being ready to compete for finals and the coaching staff and management do not have a track record of success.

4: The Chicago Bulls could have a really nice group of players to match with James and one of the best coaches in the league. In Chicago He could suit up with defensive player of the year Joakim Noah and former MVP Derrick Rose. The problem is that Rose has not played a meaningful minute of basketball in several years since he injured his knee and no one knows what he will look like or if he will be able to stay on the court. If Rose is not at full strength James will not have his super-star partner and he will have to carry the whole offensive load like he did in this year’s finals and in his Cavalier years. James cannot rely on Rose’s health and risk his future to the Bulls.

3: The real opportunities start with The Los Angeles Clippers who have the loaded roster that could potentially lure James. Chris Paul and Blake Griffin are certainly two elite players. They have a popular and respected coach in Doc Rivers and a great defensive stopper/ rebounder in DeAndre Jordan. The big problem with this scenario is the crowd it creates at the basket. James plays best with a spread floor where he can attack the rim and pick out high value shots for his teammates on the perimeter. If this team was playing all of its best players together; James would be driving into a crowd at the rim because Jordan’s offense does not extend beyond 2 feet and Griffin has not developed any type of three point shot to spread the floor. Now if they would trade Griffin for Kevin Love…

2: The Houston Rockets are another team with a loaded roster ready to compete for a title right now and James would slot in perfectly at the power forward position where the Rockets have a need. With Dwight Howard and James Harden sharing the scoring load and a bunch of nice role players, the Rockets could have the makings of an annual title contender. There is no doubt that this could be an attractive option for James but there are some lesser order problems with this scenario. Harden and Howard are really second tier stars at this point. Harden is famous for his lack of defensive effort and Howard has lost some of the dominant athleticism he had. Both of them also tend to play a lot with the ball in their hands so there could be some competition for touches.

1. The perfect roster fit is really with The Golden State Warriors. You couldn’t dream up a better superstar to pair with James than Steph Curry; who is just entering his prime and is possibly the best three point shooter ever. They have another elite three point shooter in Klay Thompson, a premier perimeter defender in Andre Iguodala and an adequate big man/ rim protector in Andrew Bogut. They might even be able to add Kevin love and give LeBron another star to play with. The James and Curry combination would send all of the completion scrambling for answers and give James another opportunity for multiple championships.