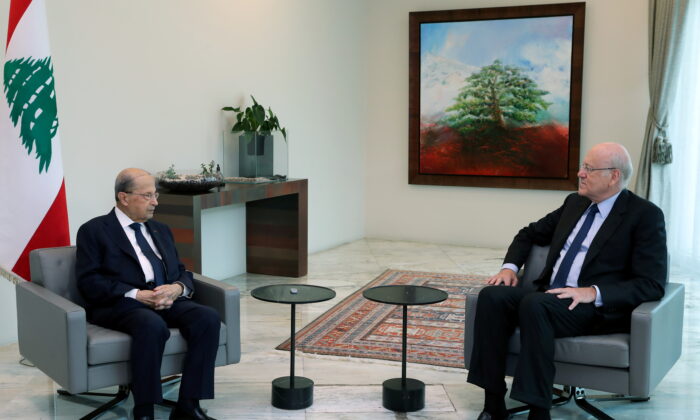 Lebanese President Michel Aoun on Monday appeared to criticize ally Hezbollah for blocking the country’s cabinet meetings for the past two months, which have further added to ongoing economic woes plaguing the country.

The country’s government was formed in September 2020 amid financial troubles following the devastating explosion at the Beirut port in August 2020. The government of 24 ministries is being led by Hezbollah-backed Prime Minister, Najib Mikati.

However, the governing body has not met since Oct. 12. after Hezbollah and its allies demanded the removal of the lead judge investigating last year’s devastating explosion.

Tarek Bitar, a Lebanese judge and the head of Beirut’s criminal court, is investigating the blast that ripped through the capital.

But Shia Islamist political party Hezbollah and its allies have refused to attend cabinet meetings until the judge is removed, claiming that Bitar is politicizing the investigation, singling out politicians allied with Hezbollah for questioning.

Efforts by Bitar to interrogate former ministers have been plagued with legal challenges. Earlier this month, Bitar resumed his investigation following a one-month standstill after the Beirut Court of Appeals rejected an appeal by former Public Works Minister Youssef Fenianos, who had been charged and summoned for questioning by Bitar.

Fenianos and three other former senior government officials have been charged by Bitar with intentional killing and negligence in the explosion. On Thursday, the investigation was paused for the fourth time after ex-ministers filed a lawsuit against Bitar when he summoned them for investigation, as per The Jerusalem Post.

Bitar is known for having no history of bias or affiliations to any political party.

Prime Minister Najib Mikati has said the issue falls outside the cabinet’s authority.

In a televised speech on Monday, Aoun did not specifically name the Iran-backed Shiite movement Hezbollah but warned the state was “falling apart,” and “people are suffocating” before questioning why the cabinet meeting was being blocked.

“Not tomorrow, today, it is imperative that the cabinet meets and remedies the problems in the Council of Ministers,” Aoun said, as per The Post. “By which law, by which logic, by which constitution is the Council of Ministers blocked, asked to make a decision that does not fall within its powers and have its action frozen over an issue that does not represent a pact-related disagreement?”

The president demanded that the “unjustified, deliberate, and systematic blockage which dismantles the State and drives it to its demise” be ended.

Aoun also indicated that he wanted to improve ties with Gulf Arab states following comments made by then information minister George Kordahi which appeared to support the Iran-backed Houthi rebels. Kordahi resigned from his post shortly after making the comments which led to weakened diplomatic ties between Lebanon and Persian Gulf states led by Saudi Arabia.

“I am keen on the best relations with the Arab States, and precisely with the Gulf countries, and I ask: “what is the reason for tautening the relation with these countries and meddling in affairs that are none of our business?” said Aoun.

“I do not want to quarrel with anyone, neither people nor parties, and I do not want to dismantle the unity of any sect,” said Aoun. “Yet, we have to be candid: marking time is fatal, and I shall not accept to watch silently as the State is falling apart and people are suffocating. I shall keep striving till the last day of my presidential tenure and the last day of my life to prevent that.”

The Lebanese president stressed that “the state is built by respecting the laws, not by transgressing authority, nor by the domination of one authority over another. The state means law and stability at the same time, and no one may give the Lebanese a choice between one of the two matters.”

Aoun also took to Twitter on Monday, where he wrote, “When the collapse occurred, I called for dialogue with those who took to the streets, but they also refused, and hid behind the slogan ‘All means all.’ Today, I renew my call for dialogue, to every Lebanese woman and man who desires the salvation of the nation.” He did not specifically reference Hezbollah in the post.

The eruption of stockpiled ammonium nitrate last year killed at least 217 people of numerous nationalities, including Canada, Germany, France, Australia, and the United States, as well as Lebanese nationals, and wounded 7,000 people, according to Human Rights Watch.

According to the World Bank, the explosion caused an estimated $3.8-4.6 billion in material damage.