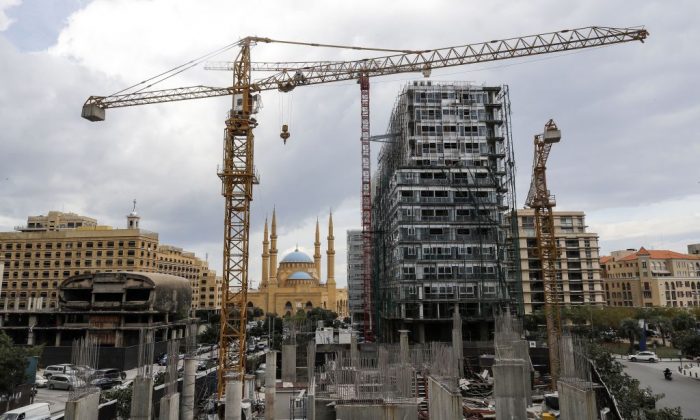 This picture taken on Nov. 26, 2018 shows a view of a halted construction site (foreground) and another still under construction (C) in the downtown district of the Lebanese capital Beirut, with the city's landmark Mohammad al-Amin mosque seen in the background. (Joseph Eid/AFP/Getty Images)
Middle East

BEIRUT—Lebanon hopes to reap an economic dividend as resources shift away from wars in the Middle East towards peacetime development, an aide to Prime Minister-designate Saad al-Hariri said on Dec. 10.

Hariri will present this more optimistic outlook for a region ravaged by conflict in Syria, Iraq, and Yemen at a London investment conference this week, senior advisor Nadim Munla said.

“If you look at it now, it looks bleak, but if you go into the medium- and long-term, we still believe the region is suffering from fatigue, fatigue of war, and there is really more serious talk about the period after,” Munla said in an interview.

Lebanon has been hit hard by the regional turmoil which has contributed to spasms of political paralysis. More than six months since an election, rival leaders have been unable to agree on the make-up of a new unity government.

Annual growth rates have slumped to between 1 and 2 percent from between 8 and 10 percent in the four years before the war erupted in neighboring Syria.

The frontlines in Syria have largely stabilized since the government recovered the southwest this summer, though the war appears far from over with large areas outside state control.

U.N.-sponsored talks have also been held towards ending the four-year-long Yemen war.

Beirut wants to attract private sector interest at the London roadshow on Dec. 12 in a $17 billion capital investment program at the heart of Hariri’s economic revival plans.

“The prime minister is going to have a very clear message that in spite of the hiccups … the outlook looks bright, that this is a region of growth where there will be a lot of business in the future,” Munla said.

“When less money is going to the war in Yemen, more money is to go into projects and economic activity. We believe that there will be a shift in the allocation of resources … from wartime to peacetime and that’s an opportunity for Lebanon.”

Lebanon’s investment plans won aid pledges exceeding $11 billion in April but donors first want reforms to address its public debt, the third largest in the world as a percentage of GDP.

But moves towards reform, notably in Lebanon’s heavily subsidized power sector, have been put on hold as Hariri struggles to form a government.

“If the government is formed and the capital investment program starts kicking in, we expect growth rates above 5 percent,” Munla said. If not, growth would continue at the 1 to 2 percent seen in the recent “bad times”.