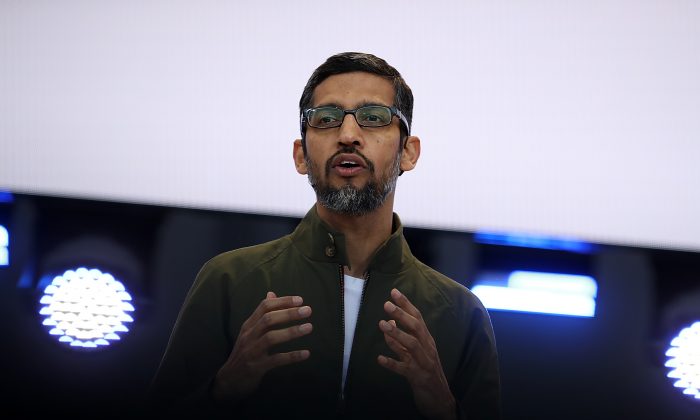 A confidential video recorded at Google has been leaked to the press, exposing top leadership openly bemoaning Hillary Clinton’s 2016 loss and discussing how President Donald Trump’s election “conflicts with many” of the company’s values.

The full recording, originally marked as “Internal Only,” that was leaked to Breitbart by an anonymous source depicts the company’s first all-hands weekly meeting after the 2016 presidential election. The unabashed remarks from top leaders reflect a sunken and depressed mood—some are on the edge of tears over the election results—while at the same time express a desire to fight Trump’s policies and reshape public opinion.

Throughout the meeting, executives switched back and forth between emotional and combative discourse, as they discussed potential plans for using the company’s powerful resources.

“I certainly find this election deeply offensive and I know many of you do too,” Google co-founder Sergey Brin said. “It conflicts with many of our [company’s] values.”

“Our values are strong,” she said. “We will fight to protect them and we will use the great strength and resources and reach we have to continue to advance really important values.”

At one point, Porat appeared to hold back tears when recalling the moment she realized Hillary Clinton could lose.

The video comes amid intensified scrutiny of major tech and social media companies accused of censoring conservative voices and manipulating search results on their platforms, something the president has recently criticized. His economic adviser, Larry Kudlow, recently told reporters that the White House would conduct “some investigation and some analysis” into Google.

Dr. Robert Epstein, senior research psychologist at the American Institute for Behavioral Research and Technology, told The Epoch Times in an interview that the video was “extremely disturbing.”

“When a top executive at Google says this, that’s very frightening,” Dr. Epstein said. “They are basically saying, ‘We will use the tools that we have to promote our values.’ To me, that means [Google] will interfere in elections. It’s extremely problematic.”

Trump aide Brad Parscale called it “a threat t0 the republic” and rallied for more investigations into the company.

A Google spokesman said in an email that their products are designed “without regard to political viewpoint.”

“Some Google employees and executives expressed their own personal views in the aftermath of a long and divisive election season,” the spokesman said. “Nothing was said at that meeting, or any other meeting, to suggest that any political bias ever influences the way we build or operate our products.”

Research from Harvard University found that search results were not objective, as the company claimed. In 2017, Google was also fined $2.7 billion by the European Union for biased search results.

Epstein, who has spent years monitoring methods of influence, found that Google has the power to influence millions of voters through the “search engine manipulation effect” and the “search suggestion effect” (SSE). In 2016, he conducted a secret monitoring project that showed Google hid negative autocomplete search results for Hillary Clinton months before the election.

“It’s one thing to show the power that search results have, but in the project, we showed that Google search results actually did favor one candidate,” he said.

Epstein’s peer-reviewed research found that Google’s algorithms can easily shift 20 percent or more of votes among voters, up to 80 percent in some demographic groups. He also found that Google search suggestions can turn a 50/50 split among undecided voters into a 90–10 split.

He said the problem with Google is that they use invisible techniques that can’t be monitored. “They don’t leave a paper trail for authorities to trace.” Epstein said the video confirmed the motive for Google’s manipulation. “If there was any doubt before, there’s no more doubt.”

A recent report found over 90 percent of all political donations made by Alphabet employees, including Google and Youtube, went to Democrats between 2004 to 2018, citing FEC records.

Senior VP for Global Affairs Kent Walker attempted to discredit the Trump election environment as a “tribalism that’s self-destructive [in] the long-term.” He said “history is on our side,” adding that the “moral arc … is long but it bends towards progress.”

Eileen Naughton, VP of People Operations, admitted hearing from conservative Google employees that they “haven’t felt entirely comfortable revealing who [they] are.” She said the company should be more tolerant, inclusive, and civil.

Not long after, Google fired engineer James Damore for an internal memo questioning restrictions on free speech in the company and who suggested promoting diversity through means other than discrimination.

Epstein said Google’s heads have nobody to check the power they have.

“The leaders of Google are really accountable to no one except themselves,” he said.