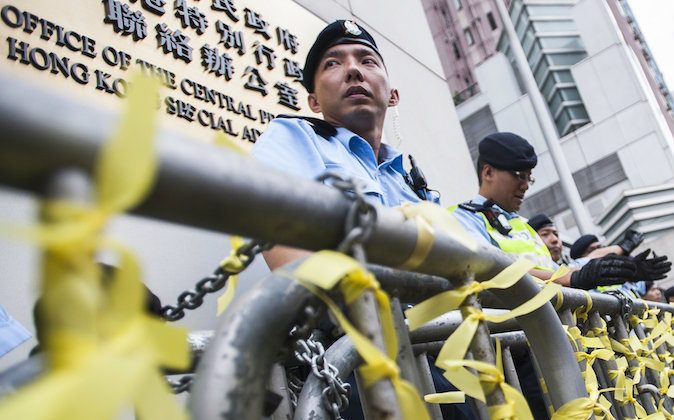 Policemen block the way to the Liaison Government Office in Hong Kong on November 9, 2014. Hundreds of pro-democracy protesters, including leaders of a movement that that has paralysed the streets for weeks, rallied to the city's China office calling for dialogue with Beijing officials. (Xaume Olleros/AFP/Getty Images)
China

Here’s how the Hong Kong police might clear the Occupy Central demonstrators.

A judge extended interim restraining orders taken out three weeks ago by bus, minibus and taxi operators against protesters blocking streets in the Mong Kok district.

The owner of an office building adjacent to the main protest site surrounding city government headquarters in Admiralty district also had a restraining order extended.

According to public broadcaster Radio Television Hong Kong (RTHK), about 7,000 police officers could be deployed to clear protesters from a section of Nathan Road (between Argyle and Dundas Streets) and Argyle Street (between Tung Choi and Portland Streets) in Mong Kok, as well as the area outside Citic Tower in Admiralty.

There are no plans yet to clear a tiny protester encampment at Causeway Bay, or in any other zones of occupation outside the places specified in the court injunctions.

RTHK sources claim that police will bring those arrested to court in a timely fashion, will not resort to baton charges to clear the protesters, and could commence their operations as soon as Thursday in Hong Kong (Wednesday noon, Eastern time).

Sightings on the ground and a Hong Kong government official’s statement are partly in line with the RTHK report.

Since the court approved the injuctions, small groups of police officers have been spotted making observations of the protest sites.

On Tuesday, Chief Secretary Carrie Lam said that the Hong Kong government have hardened their stance, and won’t hold any more talks with the student-led protesters.

Lam added that “the police will give full assistance, including making arrests where necessary,” to enforce the injunctions.

She urged protesters to “voluntarily and peacefully” leave the occupied areas so that roads and building entrances can be reopened.

The protesters have been occupying key thoroughfares in Hong Kong since Sept. 28 to demand full democracy in Hong Kong, as well as incumbent Chief Executive Leung Chun-ying’s resignation.

The act of civil disobedience is a response to Chinese communist regime back tracking on the Sino-British Joint Declaration by deciding on Aug. 31 to stick to the status quo for selecting Hong Kong’s next Chief Executive in 2017, and the Hong Kong government not contesting the unpopular decision.

Pro-democracy supporters want Hong Kong citizens to be able to nominate their own candidates and elect them by universal suffrage, a proposal that is outlined in the Basic Law, Hong Kong’s mini-constitution.

Earlier police attempts to violently clear the protesters have backfired and only drew more demonstrators onto the streets, but there are signs that Hong Kong citizens are growing weary of the occupation.

Even Hong Kong film superstar Chow Yun-fat, who is an outspoken supporter of the Umbrella Movement, feels that the students should go home and carefully rethink their next step in the struggle for democracy.