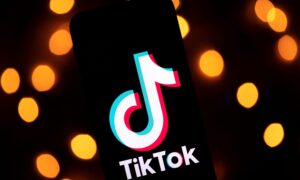 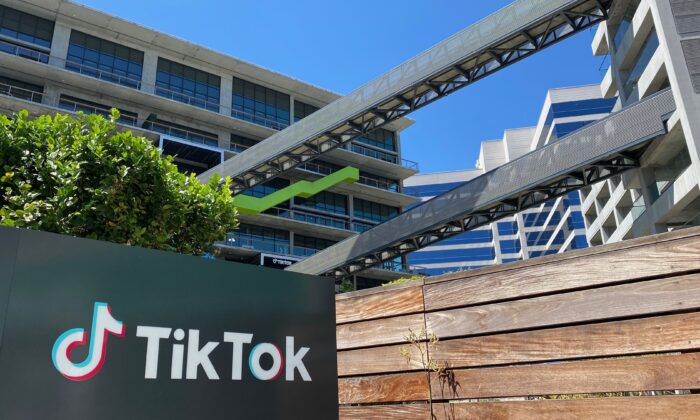 The logo of Chinese video app TikTok outside the company's new office at the C3 campus in Culver City, Calif., on Aug. 11, 2020. (CHRIS DELMAS/AFP via Getty Images)
China-US News

Chinese tech companies have been documented to cooperate with Chinese authorities on censoring information and pushing Beijing’s propaganda messages.

One way the Chinese Communist Party (CCP) uses a popular news aggregator app owned by ByteDance to promote the regime’s propaganda content to users was unveiled in an internal document recently obtained by The Epoch Times.

Meanwhile, previous comments by staff at ByteDance’s app platforms, detailing the extent to which the software collects user data, raises questions about whether algorithms work similarly at ByteDance’s most widely-used app internationally, TikTok, as it seeks to sell its U.S. business before the U.S. administration’s appointed deadline of Sept. 15. Citing the app’s Chinese ownership, risks to national security, and user data collection, President Donald Trump in late July signed executive orders to effectively ban TikTok from operating in the United States, unless it finds a U.S. buyer.

In 2016, the Luohe city government propaganda bureau issued a notice to all Chinese Communist Party committees in the county and district-level government offices in the city. Luohe is a city located in central China’s Henan Province.

The notice informed all-party committees to set up accounts on Toutiao, a popular news aggregator app owned by ByteDance. It then describes how Toutiao can make the propaganda information issued by these accounts appear as recommendations for users that the government has targeted.

“When there’s a big event or emergency incident happening, it can distribute information to designated users and users in designated regions. It supports the government in spreading information efficiently,” the document stated.

The document said that the CCP committees would not need to increase their following for this to be effective.

As early as Jan. 2018, Cao Huanhuan, software architect at Toutiao, explained how its algorithms track users’ preferences and habits, in a post on the app’s official website.

The algorithm needs to collect three types of information before promoting a post to a user: the characteristics of a post the user interacts with; the user’s characteristics; and where the user is when he/she opens the app, according to Cao.

The user’s characteristics include hobbies, profession, age, gender, which kind of phone he/she uses, the user’s browsing history on ByteDance apps, searching and surfing histories on the internet, shopping history, and so on.

The environment characteristics include the exact position of the user, such as at home, in a restaurant, or traveling abroad, etc.; what time of day; which kind of network the user is using, such as 3G, 4G, 5G, and Wifi; and weather conditions.

The algorithm will also cull the watch histories of other users who are similar to a particular user, such as those with similar hobbies or similar profession.

After the app obtains all three categories of information, an artificial intelligence (AI) tool will generation recommendations to the user.

Cao added that the algorithm can also be used to show suitable advertisements for this user.

ByteDance also created several blacklist databases, Cao said, in which millions of keywords or pictures the Chinese authorities have prohibited would not be allowed on its social media platforms. Any post containing one or more of these contents would be removed immediately, Cao said.

He did not give specifics as to how ByteDance or Toutiao is able to collect such vast amounts of data on users’ behavior and preferences, nor how its algorithm would pick up on prohibited content.

ByteDance did not respond to a request for comment.

But Cao noted that “The different social media platforms from our company [ByteDance] use this same powerful algorithm, but make adjustments according to each platform’s business models.”

And during the World AI Conference held virtually on July 11, Li Lei, director of ByteDance’s AI lab, said that his team’s designs are for all of ByteDance’s owned apps. The company owns over 20 apps.

In a recent job posting for an “algorithm engineer,” ByteDance said that the position would be “responsible for the company’s domestic and international products’ recommendations, ads, system infrastructure, big data, open platforms, and other core technologies.”

TikTok did not respond to a request for comment about its algorithm models.

The app’s algorithm may be the linchpin of any U.S. deal—as the Chinese regime revised its export control rules on Aug. 28, mandating that “technology based on data analysis for personalized information recommendation services” must be approved by Chinese authorities before export.

Market analysts have noted that this could mean ByteDance’s sale of TikTok’s U.S. operations would need approval from Beijing.

Meanwhile, TikTok’s Chinese ownership is the crux of the U.S. administration’s concerns about the possibility of user data being exploited by Beijing.

In The Epoch Times’ previous interview with former Chinese internet censor Liu Lipeng, he said he was scouted by ByteDance in China to become part of a team that would handle censorship on TikTok.

Another Epoch Times report also divulged the close ties between ByteDance and the Chinese Communist Party, with many of its managers also being members of the company’s Party unit. Companies in China are required to establish such Party organizations within their offices to ensure that business policies and employees toe the Party line.

Though TikTok has sought to distance itself from its Beijing owner, pointing to its American board members and executives, the app’s data collection and alleged censorship practices on international users have come under scrutiny in recent months.

The Epoch Times previously interviewed a Chinese international student whose TikTok account was blocked after he uploaded a video of himself lampooning the Chinese national anthem.

And the Wall Street Journal reported that some TikTok users were praising China in their videos in the hopes of gaming an algorithm that would favor China-friendly content and give them more exposure.