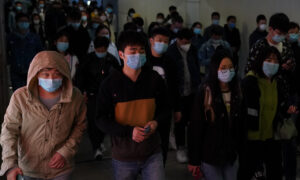 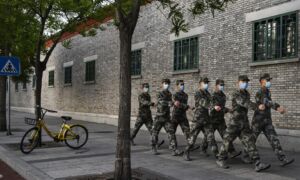 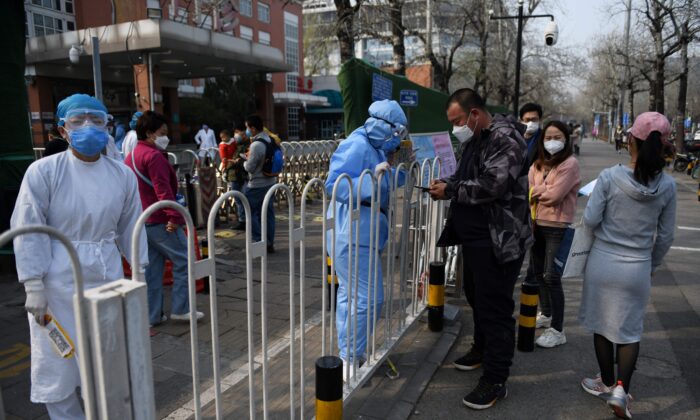 Hospital staff (L) registers patients on the sidewalk outside a children's hospital in Beijing on March 31, 2020. (GREG BAKER/AFP via Getty Images)
INSIDE CHINA

The Beijing city government has ordered all municipal-owned hospitals to set up funeral home offices, according to internal government documents obtained by The Epoch Times.

The timing has led some analysts to believe that it is related to the current outbreak of the CCP (Chinese Communist Party) virus, commonly known as novel coronavirus.

In China, funeral homes with crematoriums are all state-run.

The Beijing government issued a request in late April that all city-run hospitals set up offices within their facilities for funeral homes to make arrangements for the deceased.

An internal notice instructed: “Funeral home offices should operate 365 days per year, 24 hours per day. It should move the body from the hospital to the funeral home as soon as possible.”

In addition, if the body needs to be preserved at the morgue, the duration should not be longer than 24 hours, city authorities said.

“[The government] has two purposes in setting up funeral home offices at hospitals. One is dealing with COVID-19 patients’ bodies quickly, so as to reduce the possibility of the virus spreading inside the hospitals. The other is to hide the real situation of the outbreak,” said U.S.-based China commentator Tang Jingyuan.

Chinese authorities have underreported virus data since the outbreak began. In addition, eyewitness accounts, such as the number of cremation urns distributed to family members of the deceased, have suggested that the real death toll is far higher than what authorities have reported.

Tang added that if funeral homes move the deceased patients’ bodies away from hospitals soon after a virus patient has died, local residents won’t be able to witness the true death toll.

As early as in September 2018, Beijing city arranged for the Babaoshan funeral home to set up a working station at the Tiantan Hospital, as part of an effort to crack down on privately-run companies that run funeral-related services.

But the Beijing government appeared to have accelerated such plans abruptly, sending out an internal notice on April 17 to city-run hospitals, seeking information about their morgues, and notifying them about the details of a new arrangement for handling dead bodies.

Beijing’s municipal hospital management center, a government agency that manages all 22 city-run hospitals in the capital, requested that the facilities set up funeral home offices in May.

It asked each hospital to sign contracts with specific funeral homes that city authorities have paired up for them. The funeral homes would henceforth handle the transport of corpses directly.

The contracts must be approved by city authorities. After the contract is signed, the hospitals should hand in a copy to the Beijing municipal health commission, according to the notice.

For hospitals that still have a valid contract with a private morgue management company, the hospital must sign a contract with the city-designated funeral home once the old contract expires.

In a Feb. 8 internal notice jointly issued by the Beijing health commission, civil affairs bureau, and police about how to deal with virus patients’ corpses, authorities had already paired up hospitals with funeral homes. It is unclear whether the pairings for funeral home offices remained the same.

Beijing has five state-run funeral homes. They are managed by the city’s civil affairs bureau.

The hospital management center also organized a video conference on April 21 with all 22 city-run hospitals to discuss details about setting up the funeral home offices, according to another document.

On Jan. 20, Beijing authorities announced that residents were infected with the virus for the first time. In total, five were diagnosed. All had recently traveled to Wuhan, the central Chinese city where the outbreak first emerged.

Meanwhile, a government employee working at the Xicheng district office brought the virus from his hometown in Hebei Province to Beijing. 69 of his coworkers were identified as close contacts and had to be quarantined.

On April 19, Chaoyang district in Beijing was officially designated a “high-risk region” for the virus outbreak. Residents told The Epoch Times that they believe the outbreak to be severe.

As the country’s capital, authorities have tightly controlled movement in and out of the city, as well as information about the outbreak, only announcing a few new infections in recent days.