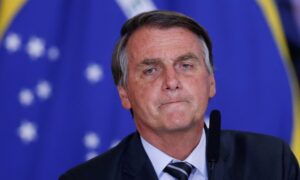 SAO PAULO—Brazil’s presidential front-runner, right-wing congressman Jair Bolsonaro, has been discharged from a Sao Paulo hospital where he received treatment after being stabbed during a campaign rally on Sept. 6.

On Sept. 29 after flying home to Rio, Bolsonaro tweeted that there was “no better feeling” than to be close to his family.

Group rallies flooded the avenues and squares of Sao Paulo, Rio de Janeiro, Brasilia other towns across the country as both supporters and protestors hit the streets on Sept. 29.

Bolsonaro’s candidacy has attracted international attention as an example of the trend in many countries toward nationalism and anti-globalist politics.

Bolsonaro is currently leading polls with around 28 percent of support among voters polled. Bolsonaro has suggested his opponents will commit fraud to defeat him on voting day. If Bolsonaro is not able to win the majority of votes on Oct. 7, the election is decided in a second round of voting.

Brazil is currently experiencing an intense period of political reshuffling after a tumultuous few years. It has suffered a deep, prolonged recession, a corruption investigation that decimated its political class, and the impeachment and removal from office of its first female president, Dilma Vana Rousseff.

Bolsonaro’s “tell it like it is” attitude has gained traction among voters who are angry at the political establishment. Despite his decades in Congress, they see him as a no-nonsense outsider who can rid Brazil of corruption and high crime rates.

He has particularly drawn support among people who are disgusted with the left-leaning Workers’ Party, who governed the country much of the last decade, and want to prevent its return to power at all costs.

He has also gained momentum by standing firmly for traditional family values in the face of political culture-wars from the left.