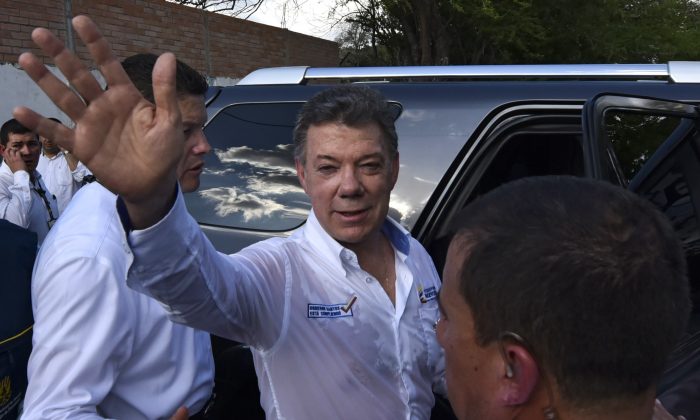 QUITO, Ecuador—The leaders of Colombia and Venezuela traveled to Ecuador on Monday in a bid to ease tension that has paralyzed trade and movement along the border.

The crisis began when President Nicolas Maduro deported some 1,500 Colombians migrants he blamed for the smuggling that has helped empty Venezuelan supermarket shelves. Another 16,000 Colombians, some of whom have lived in Venezuela for years, fled voluntarily, fearing reprisals from Venezuelan troops who were seen bulldozing homes and forcing residents to flee across a river separating the two countries with their belongings slung across their backs.

Although the deportation and mass exodus of Colombians have ceased, Maduro and his Colombian counterpart, Juan Manuel Santos, have only sharpened their attacks, with communities on both sides of the border suffering from the closure of all land crossings along a border five times the size of the one separating France and Germany.

Maduro accuses Santos of being complicit in an alleged plan hatched by right-wing elements in Colombia and the U.S. to overthrow his government but struck a conciliatory tone upon his arrival to the Ecuadorean capital.

Meanwhile Santos, who successfully restored ties with Venezuela after his predecessor threatened war with the late Hugo Chavez, has thrown off his habitual restraint and accused Maduro’s socialist revolution of self-destructing and using tactics employed by Nazi shock troops.

Venezuela says that as much as 40 percent of its goods are smuggled out of the country, costing the country $2 billion a year.

Santos says he has low expectations for the summit after two previous meetings between the countries’ foreign ministers failed to produce a breakthrough. “I’m going with the best of intentions but without great expectations,” Santos said in a message posted on Twitter Sunday night.

Meanwhile, on the eve of the talks, Maduro announced a plan to purchase 12 new Russian fighter jets.

While Maduro’s tactics have been widely condemned by human rights groups and raised concern by the United Nations, few deny that the situation along Venezuela’s western edge has become chaotic. Until Maduro’s recent crackdown, well-organized gangs operating without fear of arrest would regularly bribe Venezuelan security forces to let them cross the border with gas, food and other staples purchased at rock-bottom government-controlled prices in Venezuela and sold for huge profits in Colombia.

Venezuela says that as much as 40 percent of its goods are smuggled out of the country, costing the country $2 billion a year.

While economists cast doubt on those figures, Colombian cities along the border that have long relied on contraband are beginning to take a hit and have begun implementing a system of rationing.