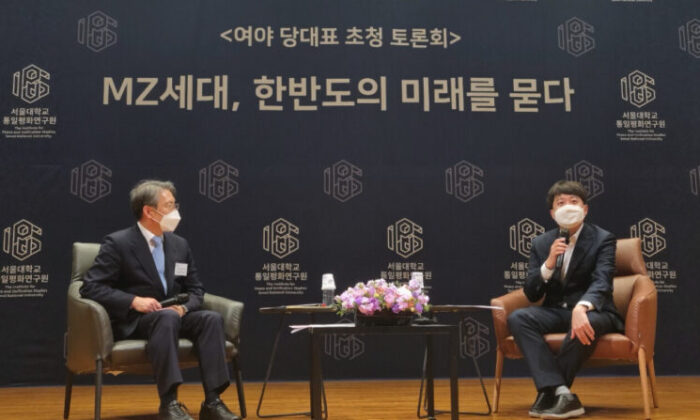 Lee Jun-seok (R), leader of the People Power Party, the largest opposition party in South Korea, said in a lecture titled "Generation MZ, Asking for the Future of the Korean Peninsula" that he would not accept unreasonable demands made by the CCP on THAAD and other issues, at Seoul National University, on Nov. 18, 2021. (Khasub Lee/The Epoch Times)
Asia & Pacific

Leader of Largest Opposition Party in South Korea: Never Accept the Unreasonable Demands of the CCP

Lee Jun-seok, leader of the People Power Party, the largest opposition party in South Korea, said recently that unreasonable demands made by the Chinese Communist Party (CCP) on Terminal High Altitude Area Defense (THAAD) and other issues cannot be accepted. He also stressed that democratic values should take precedence over economic values in international relations.

South Korea’s presidential election in March is just over three months away. In a lecture titled “Generation MZ, Asking for the Future of the Korean Peninsula” held at Seoul National University on Friday, Lee said that Yoon Seok-youl, the People Power Party candidate, insisted that South Korea should say what it wants to say against the CCP. Regarding North Korea, the Party insists on the principle of mutualism—that Seoul will only respond if North Korea makes changes.

Generation MZ refers to young people in their 20s and 30s who were born between 1980 and 2000. The MZ generation, which accounts for a third of the vote, is widely seen as the key to next year’s presidential election.

Lee Jun-seok, 36, won the support of voters for his anti-feminist ideology in June and became the leader of the People Power Party—to lead the party in next year’s presidential election. His rapid rise is seen as a shift in the political orientation of young South Koreans from liberal to conservative.

Addressing the CCP, which has been opposed to the THAAD deployment in South Korea, Lee stressed that South Korea should calmly judge everything based on its own independence and autonomy. “The unreasonable demands of China [the CCP] are absolutely unacceptable.”

Under the Moon Jae-in administration, the principle of democratic values over economic values has been greatly shaken, Lee said. “International relations should be judged by principles.”

He stressed that the Moon Jae-in administration has different attitudes toward different countries, especially Japan and China. To close the gap, it is very important to always judge on principle.

Citing Australia as an example, Lee said: “It is a big change for Australia to calmly judge its strategic assets and emphasize human rights and freedom in its relations with China [the CCP].”

“When the relationship between the two countries reached a deadlock, the CCP reduced imports of Australian raw materials, and it was China [CCP] that was hit.”

“China is Korea’s largest consumer market, but China [the CCP] should take into account the fact that it takes 30 percent of all semiconductors from Korea. [It] should consider [Korea’s] strategic position,” Lee said. “We should expand our supply chain outside of China.”

“The strategy of not making any friends in order not to offend one cannot overcome a strategic crisis.”

When Lee was asked about the People Power Party’s approach to North Korea denuclearizing if he is elected, Lee stressed that there is no reason for the MZ generation to fully accept the Kim Dae-jung administration’s policy, from 20 years ago, of appeasement toward North Korea, which was a total failure. The key for Kim Jong Un to secure the North Korean regime is nuclear weapons, and it is deceiving the public to claim denuclearization can be achieved in a short period of time.

“It is important to adhere to the principle of mutualism.”

Regarding the Moon Jae-in administration pushing to declare the end of the Korean War, Lee said, “The hasty mention of the declaration at the end of the term is more a short-term political gain than a plan to complete the peace process on the Korean Peninsula.”

He also said the Biden administration is very concerned about South Korea’s strategy toward the CCP, so North Korea’s nuclear weapons threat to South Korea and other democratic countries does not seem to be a top priority.

Khasub Lee contributed to this report.