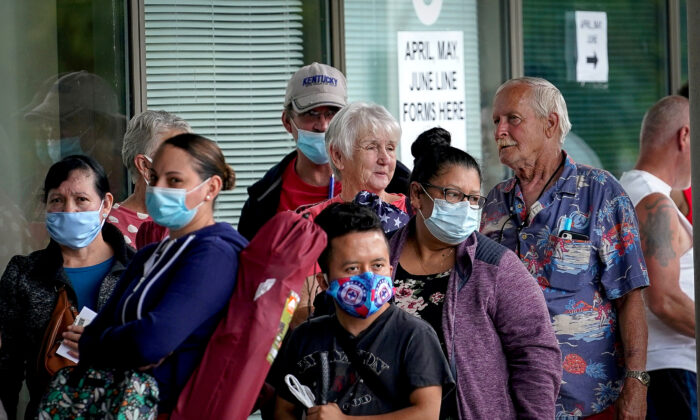 People line up outside a Kentucky Career Center hoping to find assistance with their unemployment claim in Frankfort, Ky. on June 18, 2020. (Bryan Woolston/Reuters)
Recession

Despite a better-than-expected June jobs report, the red-hot labor market could still be showing signs of cooling down as many large and small companies trim their payrolls.

A growing number of major businesses have announced intentions to lay off employees or install a hiring freeze amid broader economic concerns and recent trends.

Last month, Tesla Motors laid off about 200 workers from its Autopilot team and shut down an office in California. Moreover, CEO Tesla Elon Musk noted that he has a “super bad feeling” about the economy and announced that he would cut roughly 10 percent of salaried staff, although hourly headcount would rise.

Netflix terminated about 300 staff members across multiple areas of the tech giant. Most of the positions were located in the United States.

Cryptocurrency exchange Coinbase decreased its workforce by 18 percent as part of a restructuring initiative in response to the crash in the crypto market.

Electric vehicle maker Rivian is reportedly thinking about laying off around 700 employees, accounting for about 5 percent of its 14,000 workers.

It is not all about reducing the number of workers. Uber, Meta, Spotify, and artificial intelligence startup Olive AI have slowed down their hiring efforts or stopped taking applications entirely.

Last week, it was reported that U.S.-based companies announced plans to cut more than 32,500 jobs from their payrolls in June, the highest number since February 2021. This was also up nearly 59 percent from the same time a year ago.

“Employers are beginning to respond to financial pressures and slowing demand by cutting costs. While the labor market is still tight, that tightness may begin to ease in the next few months,” said Andrew Challenger, senior vice president of Challenger, Gray & Christmas, an executive outplacement firm, in a statement.

The four-week average for initial jobless claims has been on a steady weekly increase since the beginning of April, topping 232,000 in the week ending July 2 (pdf).

According to recent data, the small business community has also been cutting jobs.

The May ADP Small Business Report found that private-sector small business employment tumbled by 91,000 jobs in both goods-producing and service-providing sectors.

There is widespread concern that these numbers could escalate, especially after the latest National Federation of Independent Business (NFIB) Small Business Optimism Index fell to a more than nine-year low of 89.5 in June. In addition, a net negative of 61 percent of small business owners anticipated better business conditions over the next six months. This is the lowest level in 48 years.

“As inflation continues to dominate business decisions, small business owners’ expectations for better business conditions have reached a new low,” said NFIB Chief Economist Bill Dunkelberg in a statement. “On top of the immediate challenges facing small business owners including inflation and worker shortages, the outlook for economic policy is not encouraging either as policy talks have shifted to tax increases and more regulations.”

Lisa Speransky, the founder and director of Ivy Tutors Network, a New York City-based tutoring firm, has started the process of cutting staff. Her small business recently consolidated its management team, reducing it from four to three. Moreover, the education firm will begin to raise prices in September.

“Soaring prices and salaries are certainly frightening,” she told The Epoch Times, adding that she is beginning to witness “middle class and upper middle-class families hesitate a bit about spending on tutoring, more than we did before.”

But Vimal Patel, the president of Q Hotels, a hotel management firm in Louisiana, is still unable to fill positions and working understaffed. Even though staffing levels are lower, labor costs are more amid climbing price inflation.

“Inflation is causing wage increases, so even though the workforce is less, the payroll is higher because of the 30 to 40 percent wage increase,” Patel told The Epoch Times. “Energy rates, cost of supplies, and cost of insurance have all gone up, so we have no choice but to raise prices.”

Future expectations are rather bleak for Patel, adding that higher interest rates, soaring costs of operations, and rampant price inflation are weighing on smaller outfits.

Market experts warn that if this intensifies and becomes the top trend in the labor market in the second half of 2022, it could hasten a recession.

Federal Reserve Chair Jerome Powell had warned that current conditions are “unsustainably hot,” telling reporters during a post-Federal Open Market Committee (FOMC) news conference that “you really cannot have the kind of labor market we want without price stability.”

When the U.S. central bank tightens monetary policy, it typically harms the labor market because it generally results in shrinking business activity, sluggish consumer spending, and preventing companies from expanding operations. In addition, a rising-rate environment has helped increase the odds of a recession as many Wall Street firms and economists have either made a downturn their base case or raised the chances of recession within the next two years.

“A potential recession would negatively affect unemployment significantly, so employees should start preparing for one ahead of time. The biggest worry for employees is the chance of layoffs,” said Jill Gonzalez, a WalletHub analyst, in a statement.

That said, after last week’s strong jobs report, New York Fed Bank President John Williams and Atlanta Fed Bank President Raphael Bostic reiterated the position that a 75-basis-point rate hike would be justified at this month’s FOMC meeting as the labor market continues to be resilient.

Following the June rate-setting Committee meeting, the central bank updated its Summary of Economic Projections from March (pdf). On the labor front, the median unemployment rate forecast was raised to 3.7 percent for 2022, 3.9 percent for 2023, and 4.1 percent in 2024. The longer-run estimate for the jobless rate was unchanged at 4 percent.

The current unemployment rate stands at 3.6 percent, the lowest since February 2020.