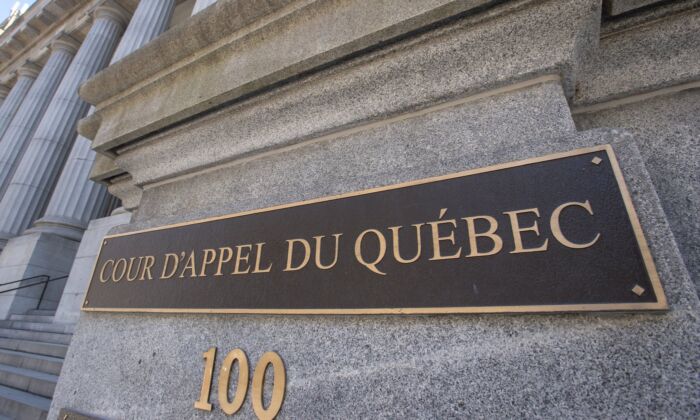 The Quebec Court of Appeal is seen March 27, 2019, in Montreal. (The Canadian Press/Ryan Remiorz)
Canada

Lawyers for the province’s attorney general, the chief justice of the Quebec court and several media organizations went before the Quebec Court of Appeal Monday to demand details about a secret trial for which there’s no publicly available record.

The existence of the trial only became public earlier this year because a police informant accused in the case appealed his or her conviction, and the appeals court issued a heavily redacted ruling in February critical of the lower court proceedings. The Court of Appeal has criticized the trial for being conducted in a way “contrary to the fundamental principles” of the country’s justice system.

Christian Leblanc, a lawyer for media organizations—including The Canadian Press—told the Court of Appeal that legal proceedings must be conducted in public.

“The very confidence of the public in its legal system depends on justice being rendered publicly,” Leblanc said following Monday’s hearing.

Most details in the original case are sealed and being kept from the public, including the nature of the alleged crime and where it allegedly took place, the name of the police force involved and the names of the lawyers. As well, the original case had no official docket number.

“We recognize that we must protect a police informant,” Leblanc said. “That said, once we say that, we have to draw the line at where that protection ends, and we certainly think it’s not a total in-camera hearing.”

The police informant involved in the case was convicted of participating in a crime that he or she had initially revealed to police. The informant claimed he or she was a victim of an abuse of process, but the lower court judge disagreed. The Appeal Court panel, however, sided with the informant and stayed the conviction and the legal proceedings.

Leblanc told the panel of three justices on Monday that in his 25 years of practising law, he had never heard of a case being held entirely in camera. He also questioned how the information could be identified if basic information about the trial is revealed. The wide-ranging seal, Leblanc said, may be “exaggerated.”

“That’s why I told the Court of Appeal that for us, these are clues, little hints that maybe the sealing order is too wide here and maybe we should have a debate so that the court can hear both sides … and review its decision,” Leblanc said.

Pierre-Luc Beauchesne, a lawyer representing the attorney general, told the court his office had not been made aware of a request to stay the lower court decision, which is customary for cases that are appealed. He said his office wants the information to create a court file, noting that keeping a record of a case is not optional.

Monday’s hearing was held before Court of Appeal justices Marie-France Bich, Martin Vauclair and Patrick Healy, the same three justices who rendered the heavily redacted ruling critical of the lower court proceedings. The Court of Appeal ruling was from February and released in March.

In their decision, the appeals court judges wrote that “no trace of this trial exists, other than in the minds of the individuals implicated.”

The court said at the time that it is “of the opinion that if trials must protect certain information disclosed therein, a procedure as secret as the present one is absolutely contrary to modern criminal law and to the respect of the constitutional rights not only of the accused, but also of the media, and it is equally incompatible with the values of a liberal democracy.”

The same panel of judges will render a decision at a later date after deliberations.