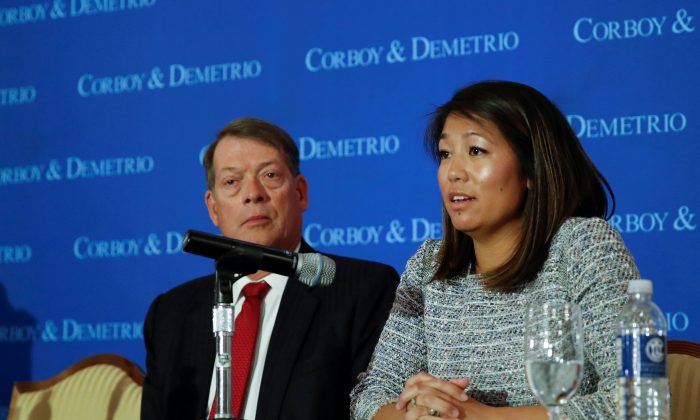 CHICAGO—The passenger dragged from a United Airlines plane in Chicago in an incident that sparked international outrage and turned into a public relations nightmare for the carrier, will likely sue the company, his attorney said on Thursday.

“For a long time airlines, United in particular, have bullied us,” Thomas Demetrio told reporters at a press conference in Chicago.

“Will there be a lawsuit? Yeah, probably.”

He said the law stated that passengers could not be ejected from planes with unreasonable force.

David Dao, a 69-year-old Vietnamese-American doctor, was hospitalized after Chicago aviation police dragged him from the plane as the airline sought to make space on a flight from the city’s O’Hare International Airport to Louisville, Kentucky.

Dao, who was discharged from the hospital on Wednesday night, suffered a significant concussion, a broken nose and lost two front teeth in the incident, and he will need to undergo reconstructive surgery, Demetrio said.

Video of Sunday’s incident taken by other passengers and showing Dao being dragged up the plane aisle and with a bloodied mouth circulated rapidly, causing public outrage that was not calmed by the airline’s initial response to the case.

Dao’s daughter, Crystal Dao Pepper, told the news conference that the family was “horrified, shocked and sickened” by what happened to her father. She is one of Dao’s five children.

Demetrio said Dao had told him that being dragged down the plane aisle was more terrifying than his experience fleeing Vietnam in the 1970s.

Demetrio and a second attorney, Stephen Golan, said neither they nor the family had heard from United yet.

The lawyers filed an emergency request with an Illinois state court on Wednesday to require United Continental Holdings Inc and the City of Chicago to preserve video recordings and other evidence related to Sunday’s incident, which would be a precursor to a lawsuit.

United Chief Executive Oscar Munoz is under pressure to contain a torrent of bad publicity and calls for boycotts against United, including in China, where people have been angered because Dao was an Asian-American passenger.

United shares have lost about 1 percent of their value since Monday.

Given the wide public outrage over the incident, Dao is in a strong position as he prepares to launch a legal action, lawyers who represent airlines and passengers said.

“United is looking at a legal claim, but they’re also looking at a huge public relations and business problem,” said Justin Green, a partner at the law firm Kreindler & Kreindler in New York who represents airline passengers.

“I think United, if they’re smart, will quickly and quietly settle the case.”

Paul Callan, a civil and criminal trial lawyer in New York, said Dao has at least two potential claims against the airline: a personal injury claim for assault and battery, which could also target the police; and a contract claim.

Callan said he had reviewed United’s contract of carriage, the fine print that passengers agree to when they buy tickets. He said that while the contract allows United to deny passengers boarding, it says nothing about removing a passenger from a plane unless the passenger is disruptive.

Deepak Gupta of the law firm Gupta Wessler in Washington who works on consumer issues, noted that there were potential legal roadblocks to a lawsuit. However, Gupta said, “I think the serious public relations risk to United will give them an incentive to provide a generous settlement.”

Munoz has sought in the last two days to make amends. In a statement on Tuesday he said he “deeply” apologized and was disturbed by what had happened.

On Wednesday, Munoz apologized to Dao, his family and United customers in an ABC News interview, saying the company would no longer use law enforcement officers to remove passengers from overbooked flights.

Kenneth Quinn, a partner at the law firm Pillsbury Winthrop Shaw Pittman in Washington who represents airlines, disputed that Dao had a case.

Quinn said that under the passenger contract, removing Dao from the plane while it was still at the gate was no different from denying him boarding. And once Dao refused to leave, Quinn said, the airline had a reason to use force.

But Quinn said that even without a strong case, Dao would probably walk away with a hefty settlement.

“I think United is likely to be found on legally solid ground, but has already lost in the court of public opinion, and will pay dearly for it,” Quinn said.

Chicago’s Aviation Department said on Wednesday that two more officers had been placed on leave in connection with the incident. One officer was placed on leave on Tuesday.