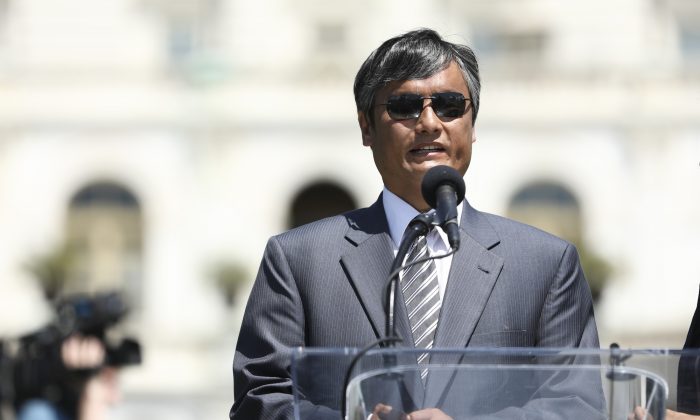 Attorney and human rights lawyer Chen Guangcheng speaks at a rally to commemorate the 30th anniversary of the Tiananmen Square massacre, on the West Lawn the Capitol on June 4, 2019. (Samira Bouaou/The Epoch Times)
Chinese Regime

Chen Guangcheng, the well-known Chinese human rights activist and lawyer, revealed in an interview with The Epoch Times Chinese-language edition that China’s peasants actually earn as little as $46 to $77 per year.

Chen became famous in China for his work helping vulnerable groups, such as peasants, migrant workers, and the disabled, defend their rights.

According to Chen, Chinese peasants are forced to pay agricultural taxes and various fees as reported by local governments to their superiors on an annual income of $539 to $555.

“Many peasants are not able to pay,” Chen said from the safety of the United States.

Communist officials have ways to fool or threaten peasants to pay, Chen continued. The local officials would typically tell the peasants to sign a document acknowledging that the money is not paid by saying, “You can pay later if you sign the paper.”

“The consequence of signing means the peasant admits to owing the government money. Now, it becomes a loan, and banks are entitled to collect it,” Chen said.

He recalled that when banks come to collect, they were accompanied by judicial officials and men he described as thugs.

“The Chinese Communist Party (CCP) has thugs coming along to beat you up,” he said.

After a beating or roughing up, the official would force the farmer to borrow the money from his neighbors. Otherwise, they would break down the door of the farmer’s house and take away his food and livestock to pay for the taxes.

“This is illegal, against Chinese law,” Chen said.

But the farmers have no place to appeal for justice.

Learning that Chen had successfully helped disabled people and migrant workers file for compensation from the regime, many peasants went to him for help.

In China, Chen helped peasants with administrative litigation, which is better known in China as “lawsuits of ordinary people against the government.”

He explained that this is the hardest point in Chinese law because the CCP controls almost everything. He said that, under the communist regime, besides good legal knowledge, a person needs great courage to file administrative litigation.

“Some legal scholars and experts in Beijing and Shanghai universities told me that they would never touch it if they could,” Chen said.

The first difficulty is to get the lawsuit filed, Chen said. With no case filing, there is no case at all.

According to the CCP’s Administrative Litigation Law, the case filing division must issue a written receipt upon receiving the complaint and relevant documents. Then, the division has about five to ten days to verify the lawsuit.

After that, it should issue a written notice on whether the lawsuit is filed.

“Theoretically, you can take a written notice to a higher court if you think the decision is unjustified. But in reality, the case-filing division does not give you any receipt. That means you have come nowhere with the case because you’re not able to file it,” Chen said.

The CCP exploits procedures to make it impossible to file a lawsuit, Chen said.

He gave one particular case filing experience as an example.

A female officer in the case filing division surnamed Liu received a complaint from Chen and his clients. She accepted the materials and told them to go home and wait five days for the administrative division to decide whether the lawsuit would be filed.

“I agree to wait for five days, as is required by law, but I need a written receipt of the complaint,” Chen had told Liu.

But Liu insisted the case filing division did not have a receipt, which was to be issued by the administrative division.

Chen suggested that Liu take the complaint to the administrative division.

She went with the complaint and materials to the administrative division on the second floor.

Then, Chen said to Liu, “I now ask you to follow the Chinese law to give me a written receipt because your case filing division has received my complaint. Whether the case is filed or not, it is a decision to be made in several days. But now, you must give me a receipt of yours. This is a legal regulation, right?”

Liu was wordless. She admitted that she had received the complaint because Chen had been recording the whole process. But she still wouldn’t give him a receipt.

Chen told her that, in this case, he’d need the documents back, so she went back upstairs to the administrative division for the complaint and copies of evidence that Chen had given her.

It was rare for a court official to listen to a lawyer in China, Chen said. One possible reason is that the officials had never seen ordinary people with such courage and determination to enforce the law.

In a short while, she came back to Chen and his clients but without the documents. She told Chen that the administrative division wanted to talk with him.

The president of the administrative division, also surnamed Liu, was called Chaowei. He came downstairs and summoned Chen and his clients to a room next to the case filing division.

Chen told The Epoch Times that in that room, there were various torture instruments, including rubber batons, handcuffs, and shackles, among others.

Liu Chaowei told Chen, “your lawsuit [documents], you take them back first. We’ll discuss and see if the case is to be filed.”

Chen was not scared. He asked Liu, “What do you mean by saying, ‘You take them back first.’ Does that mean the legal procedure has started? Will you give me a notice in five days?”

After listing many other excuses, Liu failed to persuade Chen. In the end, Liu became furious. “What you say doesn’t count!” he shouted.

Chen replied: “Don’t forget that the state has laws and regulations. It is illegal if you don’t file a case that is to be filed. You’ll be held legally responsible.”

Liu left the room angrily with the complaint and relevant documents. Chen told his clients to follow him to see what he planned to do. Luckily, Chen’s clients were very courageous, and followed him to Liu’s office.

When Liu found all three plaintiffs following him to his office, he was shocked. He asked them what they were there for, and they made it very clear: “We are here for your receipt, your receipt of our file.”

At that time, a person came out from the office next door and asked what was going on. The plaintiffs told him that they were there to sue the local township government. “He has received our complaint, but he doesn’t give us the receipt,” they said.

The man said: “This should be given to them. On what grounds wouldn’t you give them the receipt?”

Chen said he had no idea why the other person intervened. “Probably, he was from a different division, and had a different opinion,” Chen said. “Under such circumstances, with our efforts and cooperation, the administrative division had to issue us a receipt acknowledging that they had received our complaint.”

Now, they were able to initiate the lawsuit.

Chinese Law Nothing More Than a Piece of Paper

After the case was filed, the troubles would only continue.

“As a litigant, you are obligated to go to the court when the court tells you,” Chen said.

The court would intentionally torment plaintiffs like disabled persons or poor peasants by calling on them frequently to appear in court. The frequent trips would be extra financial burden for plaintiffs.

When the court had to conduct a hearing at the insistence of Chen and his clients, the local government officials as defendants in the case wouldn’t show up in court. Under such circumstances, when the accused are absent—in accordance with the provisions of the Administrative Procedure Law—the court should immediately rule unconditionally in favor of the plaintiff.

“However, the court often plays the role of the defendant’s agent, creating way too many troubles for the plaintiff,” Chen said.

“In reality, the CCP sees no law. What the law stipulates means nothing more than a piece of paper. The CCP will only enforce it when it’s beneficial to itself,” he said.

“As for local governments, they are supported by central officials. With the endorsement of the high power, they won’t bother with the laws. Their behavior is exactly what had happened in the Cultural Revolution. They do whatever they want at their own will,” Chen said.

Chen said he is regarded by the CCP as “an enemy of the state” after many years of creating negative stories of the regime by helping ordinary Chinese people defend their rights.