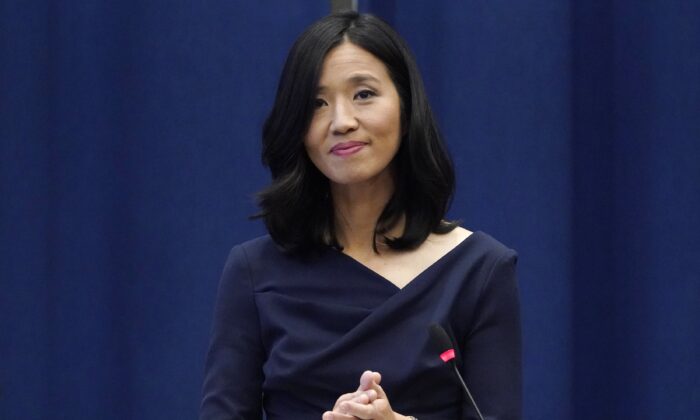 Boston should pay $6 million each to 16 people who were negatively affected by the city’s COVID-19 vaccine mandate for private businesses, according to a new lawsuit.

The people, all residents of Massachusetts, say the mandate was unconstitutional and violated their constitutional rights, including their rights to equal treatment and protection.

One plaintiff, Shana Cottone, a Boston police officer, says she was refused service at two separate pizza restaurants because she did not show proof she’d received a COVID-19 vaccine. Boston police officers were called to enforce the mandate, and Cottone was investigated by her employer.

Cottone, who submitted a religious exemption to the city for not taking a vaccine, suffered “embarrassment, humiliation, and mental anguish” as a result of what happened, the suit states.

Denice Barrasso, another plaintiff, was “unable to visit establishments” covered by the mandate because she did not have proof of vaccination. That has caused her anxiety and mental anguish, according to the suit.

Jason Dunton, a Boston gym owner who is not vaccinated, says the mandate caused him to lose about 30 percent of his business. Additionally, he says he was forced to hire additional staff members whose job was to check whether patrons had received a COVID-19 vaccine.

The other plaintiffs include Shannon Lundin, who says her employer, the Massachusetts General Hospital, denied her request for a religious exemption because of the mandate; Kelly Diver, who says the mandate deprived her and her son, Jacob, from going to indoor exhibits at the Franklin Zoo; and Joel Greenburg, a driver for Lyft who says the mandate meant he couldn’t pick up passengers in or deliver passengers to Boston.

The suit, filed in federal court in Massachusetts, asks the court to declare plaintiffs’ constitutional rights were violated and an award of $6 million total in damages for each plaintiff, as well as attorney fees.

The amended complaint was filed because the original suit asked for the blocking of the mandate but the COVID-19 vaccine mandate was lifted on Feb. 18, approximately three hours after the suit was filed.

Boston Mayor Michelle Wu, a Democrat in her first term who is one of the defendants, imposed the mandate for many establishments, such as restaurants and gyms, on Dec. 20, 2021.

At the time, Wu said the mandate was needed because “the vast majority of COVID-related hospitalizations are of unvaccinated individuals, which is impacting our entire health care system and compromising the health of our communities.”

At the time, data indicated that vaccines had stopped working well in preventing virus infection but were holding up against hospitalization.

Like some other areas, though, the majority of COVID-19 hospitalizations in Massachusetts as of March 7 were among the vaccinated, according to the state Department of Public Health. The data for Boston alone wasn’t available.

All three vaccines available in the United States have performed worse against the Omicron virus variant, which became dominant in the country in late 2021. All Americans 12 and older are advised to get at least one booster because of the waning effectiveness.

Wu said in lifting the mandate that the drop in COVID-19 cases and hospitalizations “shows that we’re ready to take this step in our recovery,” crediting “vaccines and boosters.”