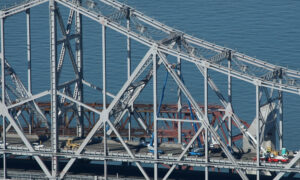 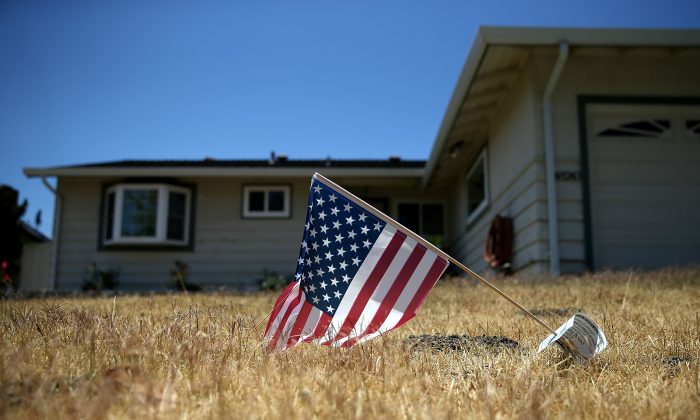 An American flag is displayed on a dead lawn in front of a home in Fremont, Calif., on July 18, 2014. (Justin Sullivan/Getty Images)
Viewpoints

California is home to nearly 40 million people and the supply of water does not always meet demand, particularly in times of drought. A recent newspaper article offered the solution of snitching on one’s neighbors.

On July 9, the Sacramento Bee published an article headlined, “Is your neighbor wasting water? Snitching on them may ease California drought, study says.” According to the report, “ratting out one’s neighbors could help relieve some of the pressure from California’s current drought.”

That caught the attention of California Globe editor Katy Grimes.

“While California politicians and water officials have long supported water snitches,” Grimes wrote on July 12, “this is the first time we’ve seen a study supporting the idea, and curiously, an out-of-state university study.” That study turned out to be “Public Water Waste Reporting: Contextual Correlates and Conservation Outcomes,” by University of Wisconsin-Madison professor Manny Teodoro, a self-described “environmental justice” warrior.

For Grimes, “the study was all about monitoring neighbors and ratting them out when their sprinklers run too long or on the wrong allowable water day.” In this case, Teodoro leaned on strategic assistance.

The study supports the idea of “participatory surveillance” and cites the Chinese research article “Social ties and citizen-initiated contacts: the case of China’s local one-stop government,” written by Youlang Zhang, assistant professor in public administration at China’s Renmin University, and Xufeng Zhu, professor of public policy and management at China’s Tsinghua University. The article examines why some citizens are “more likely to initiate contact with the government than others.”

As it turns out, the research for “Social ties and citizen-initiated contacts” was supported by the National Natural Science Foundation of China (NSFC), established in 1986 under the jurisdiction of the State Council and since 2018 managed by the Ministry of Science and Technology. The State Council of the People’s Republic of China, in turn, is “the Central People’s Government of the PRC” and “the highest organ of state administration.”

The English-language link for the State Council shows a photo of Xi Jinping participating in the Chinese Communist Party’s (CCP’s) centenary celebrations. In China, all science is political science, and everything traces back to the CCP. Meanwhile, the push for what Grimes calls “water snitching” is hardly the only Chinese influence in California.

For the new span of the Bay Bridge from San Francisco to Oakland, California rejected federal funding that would have required the use of American steel. Instead California contracted with China’s state-owned Shanghai Zhenhua Heavy Industries Co., which at the time had no experience building bridges. California politicians claimed Chinese steel, engineering, and labor would save money and render a quality product. They were wrong. The span came in 10 years late, $5 billion over budget, and riddled with safety issues that remain to this day.

One of the biggest boosters of the new span was Lt. Gov. Gavin Newsom, a former mayor of San Francisco. In March 2020, Gov. Newsom declared a state of emergency and during an April 7, 2020 MSNBC appearance, announced a $1 billion deal for “upwards of 200 million masks” with “a manufacturer here in the state of California.” That turned out to be Build Your Dreams (BYD), a Chinese company with no experience manufacturing masks, and at the time the efficacy of masks was still in question.

The $1 billion deal was 30 percent more than the state budget allotted for infectious diseases for the entire fiscal year. Newsom hid details of the deal, even from fellow Democrats. The governor quickly sent the first installment of $495 million to BYD, and the Chinese company referred reporters’ questions back to his office.

Newsom’s dealings with BYD have made the recall election something of a referendum on China. The vote will take place on Sept. 14.