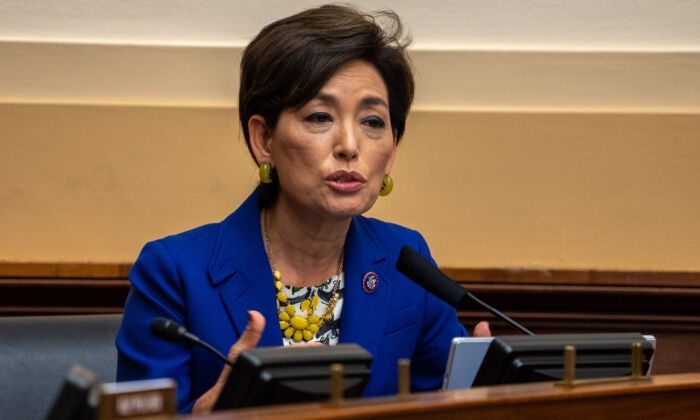 Two U.S. lawmakers have introduced a measure that would require an investigation into whether the Chinese communist regime has assisted Russia in evading Western sanctions levied in response to the Ukraine invasion.

“Silence and deference from the People’s Republic of China [PRC] toward the Russian Federation cannot be ignored,” said Rep. Young Kim (R-Calif.), one of the co-sponsors of the proposal, according to a March 7 statement.

The Chinese regime has repeatedly refused to condemn Russia’s invasion of Ukraine, despite growing calls from the United States and others for it to do so. Instead, Beijing has blamed Washington and NATO for instigating the conflict.

“The way Russia has cozied up to the Chinese in recent months is concerning, and we need to make sure China isn’t helping Putin and his cronies evade sanctions and, by extension, supporting this appalling, violent invasion of a sovereign country,” Rep. Elissa Slotkin (D-Mich.), the bill’s other co-sponsor, said in a statement.

The bill would require Secretary of State Antony Blinken and other officials to submit a report to and brief Congress on the extent to which the Chinese authorities and Chinese Communist Party (CCP)-affiliated entities may have assisted Russia in evading sanctions.

If approved, the legislation would ensure that the United States “sends a clear message to the PRC and CCP that any efforts to assist Russia in evading U.S.-imposed sanctions will not be tolerated and will be met with severe costs” Kim said in the statement.

The proposal follows concerns that Beijing, Moscow’s top trade partner, could be helping its neighbor blunt the effects of international sanctions, given their strengthened ties.

The regime supported Russia against the impact of sanctions after Moscow’s illegal annexation of Crimea in 2014, according to the U.S. government.

“China has intensified economic, energy, and technological ties with Russia—especially after the United States and European nations imposed sanctions in response to Moscow’s illegal occupation and annexation of Crimea in 2014 and its continuing aggression in the eastern Ukraine,” the U.S. State Department said in a 2020 report.

Russian Banks Looking to Partner With China’s UnionPay as Mastercard, Visa Pull Out

“The PRC worked with Russia to increase the use of the Chinese yuan and Russian ruble over the U.S. dollar in bilateral trade, in part to insulate both nations from U.S.-led financial sanctions,” it stated.

Since 2014, trade between the two countries has surged more than 50 percent. China’s official customs data showed that its trade with Russia surged nearly 36 percent last year to a record $146.9 billion. The neighboring countries aim to boost that to $250 billion in 2024, Chinese leader Xi Jinping said during a summit with Russian President Vladimir Putin in Beijing on the opening day of the Winter Olympics.

The summit culminated in a lengthy joint document announcing that the two sides had a “no limits” friendship with “no ‘forbidden’ areas of cooperation.”

The closer partnership they displayed has fueled speculation about whether Xi was aware in advance of Putin’s plan to attack Ukraine. CCP officials had reportedly asked Moscow to delay the attack until after the Beijing Winter Olympics.

On Feb. 21, one day after the close of the Games, Putin ordered Russian troops into two separatist regions in eastern Ukraine, a precursor to the full-scale invasion three days later.

China, whose ruling communist regime has refused to characterize Moscow’s actions as an invasion, lifted the restrictions on Russian wheat on the first day of Russia’s assault. On day 12 of the war in Ukraine, China’s top diplomat termed the regime’s ties with Moscow as “rock solid.”

The United States and its allies have imposed a spate of sanctions against Russia in response to the war in Ukraine; the latest move announced by Washington was a ban on Russian oil imports.

Commerce Secretary Gina Raimondo on March 8 warned that Chinese firms seeking to defy U.S sanctions by providing Russia with chips and other supplies could be “essentially shut” down.