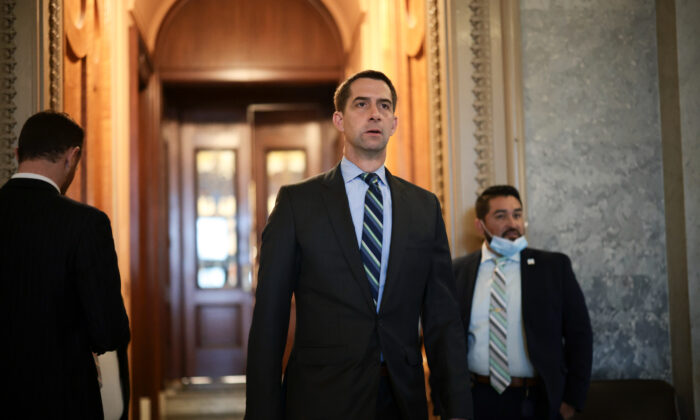 Sen. Tom Cotton (R-Ark.) departs from the Senate Chambers during a series of votes in the U.S. Capitol Building in Washington, on Oct. 06, 2021. (Anna Moneymaker/Getty Images)
Asia & Pacific

Some Republican lawmakers are calling on President Joe Biden to reaffirm U.S. support for Taiwan amid escalating Chinese military provocations.

Tensions have ratcheted up over the past week, as China has sent a total of 150 military planes into the air defense zone around Taiwan, the democratically governed island that Beijing views as a breakaway province and hasn’t ruled out the use of force to achieve unification.

The intensity of Beijing’s sustained military harassment, beginning Oct. 1 as the regime celebrated its founding anniversary, continued for five consecutive days in a record-breaking show of force, drawing anxiety both in Taiwan and abroad about a possible Chinese attack.

“The Chinese Communist Party’s encroachment of Taiwan’s airspace is inexcusable,” Sen. Tom Cotton (R-Ark.) told The Epoch Times. “President Biden must respond to this aggression and reaffirm the United States’ commitment to our friends in Taiwan.”

The United States committed to maintaining unofficial diplomatic ties with Taiwan under the Taiwan Relations Act of 1979, when the Carter administration switched diplomatic recognition to the Chinese regime. The act requires the United States to provide aid to Taiwan to ensure the island has a sufficient self-defense capability.

Ahead of Taiwan’s National Day on Oct. 10, some U.S. lawmakers have sent congratulatory letters to President Tsai Ing-wen to express their support.

“We are mindful that Taiwan stands at the forefront of confronting challenges posed by the Chinese government,” wrote Sen. Bob Menedez (D-N.J.) and Sen. Jim Inhofe (R-Okla.), co-chairmen of the Senate Taiwan Caucus. The stepped-up military threats from Beijing makes it “now more important than ever to defend the democratic values and free-market principles embodied by Taiwan’s people and government,” they wrote in an Oct. 5 letter.

Sen. Marco Rubio (R-Fla.) called on Biden to work with allies to ensure the Chinese regime respects the status quo and Taiwan’s sovereignty, saying the “Chinese Communist Party intended to “intimidate Taiwan and send a message to the rest of the free world.

“If Beijing’s recklessness is not met with international condemnation, Xi Jinping will think he has a green light for further aggression,” he said in a statement on Oct. 4, referring to China’s top leader.

Taiwan has assessed cross-strait tensions to be at their worst in four decades, in light of the recent Chinese military threats. If Taiwan were to fall, it would signify that “in today’s global contest of values, authoritarianism has the upper hand over democracy,” Taiwan’s President Tsai Ing-wen warned in an Oct. 5 op-ed for Foreign Affairs magazine.

Feng Chongyi, an associate professor in China studies at the University of Technology in Sydney, said that the Chinese regime’s goal in mounting military pressure on Taiwan is two-fold: to boost domestic nationalism and to win concessions from Washington.

“The Biden administration has sent off the signal that it wants to build closer ties with China … they want peace rather than war,” he told The Epoch Times, making a note of the White House’s statement that it doesn’t seek conflict with China.

To the regime, this is a display of weakness, according to Feng. It means “you need to negotiate with me and give ground in some other areas.”

“We have a significant amount of capability forward in the region to tamp down any such potential,” she told a panel hosted by the Center for Strategic and International Studies on Oct. 1, when asked about the possibility of a Chinese invasion. “The Taiwanese, their ability to defend themselves effectively is a game-changer in terms of that deterrent calculus for China.”

Taiwan has planned to spend an additional $8.69 billion in defense over the next five years to upgrade weapons, including cruise missiles and warships.