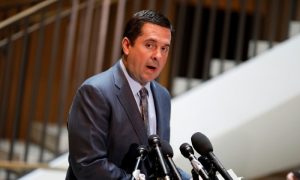 Nunes: Leak Is the 'One Crime We Know' of in Russia Probe
0
Share Now
TelegramFacebookTweetEmailTellMeWeReddit
Copy Link 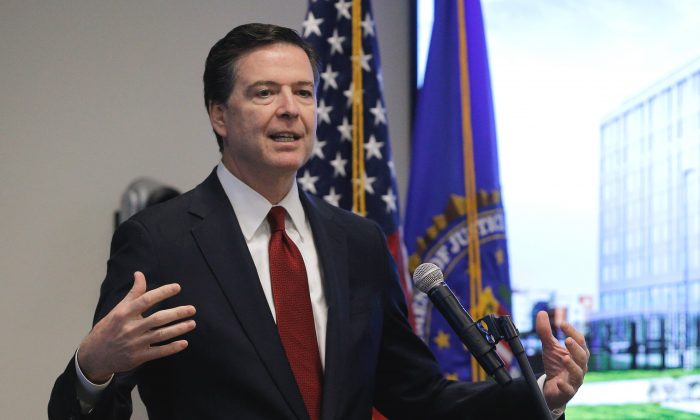 WASHINGTON—The directors of the FBI and National Security Agency will break their public silence on Monday about investigations into alleged links between Russia and President Donald Trump’s election campaign at a rare open congressional intelligence committee hearing.

Other congressional committees also are investigating the matter, mostly behind closed doors. Still, amid a furor over whether Moscow tried to influence the 2016 presidential race on Trump’s behalf, lawmakers said they would make public as much of their probes as possible.

Comey and Rogers were not expected to reveal much in public about the investigations, which include information that is classified Top Secret and split into different sections, each of which requires a separate clearance.

But the hearing could become heated as Republicans balance support for their party’s leaders and Democrats vent frustration over Republican congressional leaders’ refusal to appoint a special prosecutor or select committee to investigate.

Trump fired his national security adviser, Michael Flynn, last month, saying Flynn failed to properly brief the administration about the content of his conversations with Russia’s ambassador before Trump took office on Jan. 20.

Last week, new information surfaced about more than $65,000 that Flynn was paid in 2015 by companies with links to Russia.

Attorney General Jeff Sessions, a former senator, recused himself from any investigation related to the presidential campaign. During his confirmation hearing he said he didn’t have any contacts with Russian officials as part of Trump’s campaign. He, however, failed to disclose that, as senator, he had met with Russia’s ambassador to the United States, Sergey Kislyak.

Hours before the Monday hearing, Trump tweeted that former Director of National Intelligence “James Clapper and others stated that there is no evidence Potus (president of the United States) colluded with Russia,” and said Democrats were pushing the inquiry because of the party’s election losses.

James Clapper and others stated that there is no evidence Potus colluded with Russia. This story is FAKE NEWS and everyone knows it!

Clapper said this month there was no evidence of “collusion” between the Trump campaign and Russia in a January intelligence report concluding Russian interference in the 2016 election, but “this could have unfolded or become available in the time since I left government.”

Nunes said on “Fox News Sunday” there was no evidence of collusion.

Both Trump’s fellow Republicans as well as Democrats in Congress said they were frustrated by what they considered the intelligence community’s failure to provide enough information about any contacts with Russia, as well as Trump’s claim that his predecessor, Democratic President Barack Obama, ordered a wiretap of Trump Tower.

Schiff said he expected Comey to make clear at Monday’s hearing that Trump’s allegation was unfounded.

“I hope that we can put an end to this wild goose chase because what the president said was just patently false,” Schiff said on NBC’s “Meet the Press” on Sunday.

Nunes said on Fox that he was not aware of any warrant that would have allowed such a wiretap.

Members of both parties have threatened to subpoena administration officials or delay confirmation hearings for Trump’s nominees until their requests for information are answered.

Many Democrats also are deeply unhappy with Comey for his handling of an inquiry into Democratic presidential candidate Hillary Clinton’s use of a private email server, especially as he issued statements about it shortly before Election Day.

When asked what the committee expects from the hearing, Jack Langer, a spokesman for Nunes, gave a substantial list.

“We’re expecting directors Comey and Rogers to shed light on Russia’s active measures undertaken during the 2016 election campaign, the U.S. government’s response, the compilation of the Intelligence Community’s Jan. 6 report on these events, and on related questions concerned possible surveillance on Trump campaign associates and on possible leaks of classified information,” he said.

The Senate Intelligence Committee has announced a public hearing for March 30. The witness list, titled “Disinformation: A Primer on Russian Active Measures and Influence Campaign,” does not yet include any government officials.

The House committee will hold a second public hearing on March 28 with former U.S. officials, including Clapper and former CIA Director John Brennan.