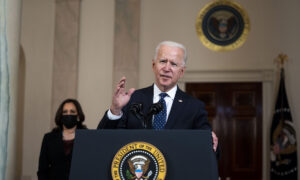 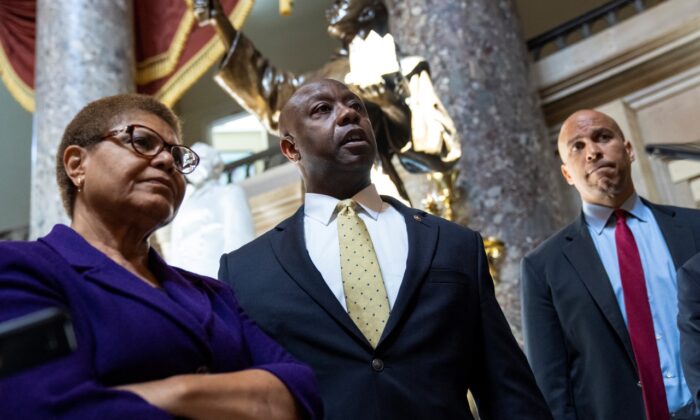 A trio of bipartisan lawmakers leading negotiations on a comprehensive police reform package have reached a preliminary bipartisan agreement on the issue, they announced on June 24, bringing them one stop closer to passing the major bill.

Three of the five negotiators; lawmakers Sens. Tim Scott, (R-S.C.), and Cory Booker, (D-N.J.) and Rep. Karen Bass, (D-Calif.) touted their progress, which came after months of negotiations, in a joint statement on Thursday afternoon.

“After months of working in good faith, we have reached an agreement on a framework addressing the major issues for bipartisan police reform,” the lawmakers said. “There is still more work to be done on the final bill, and nothing is agreed to until everything is agreed to.”

“Over the next few weeks, we look forward to continuing our work toward getting a finalized proposal across the finish line,” they added.

The lawmakers did not give further details on the terms of their agreement and what exactly was in the framework.

The names of Sens. Dick Durbin (D-Ill.) and Lindsey Graham (R-S.C.) did not appear in the joint statement. However, majority whip Durbin told reporters on Thursday, “When you get to this level, the little things are the big things,” adding, “We want to make sure that we clear them up.”

White House press secretary Jen Psaki also released a brief statement on Thursday evening, in which she said that President Joe Biden is “grateful to Rep. Bass, Sen. Booker, and Sen. Scott for all of their hard work on police reform” and “looks forward to collaborating with them on the path ahead.”

Congress has worked to pass legislation since last summer following the high-profile death of African-American man George Floyd at the hands of Minneapolis police officers, which prompted bipartisan calls for an overhaul of policing standards.

A core part of the issues is the George Floyd Justice in Policing Act of 2021, which passed the House in March. But the legislation has since been embroiled in negotiations led by Bass, Scott and Booker.

The proposed laws would ban police tactics such as chokeholds and no-knock warrants, lower the legal standard required to convict an officer for misconduct, establish guidelines for police departments nationwide, and create national standards for policing in a bid to bolster accountability.

It would also prohibit “qualified immunity,” the powerful legal doctrine that shields law enforcement and other public officials from liability in civil lawsuits.

At the time, Biden said he had hoped that Congress would pass the reform effort by the first anniversary of Floyd’s death in late May.

However, “qualified immunity” has reportedly been a sticking point during prolonged negotiations, with Republicans opposing calls from Democrats to alter or revoke it from the act after mumerous members of law enforcement have warned they expect more police to walk off the job if the bill passes.

GOP lawmakers have argued that “qualified immunity” is necessary and that any effort to remove it would further complicate police work and hurt recruiting efforts.

Meanwhile, some civil rights groups and Democratic lawmakers have said that the changes are necessary to ensure accountability among law enforcement officers.

Republicans have generally backed a scaled-down measure like the JUSTICE Act introduced last year by Scott, which called for reducing the use of chokeholds, increasing federal reporting requirements for use of force and no-knock warrants, strengthening of training methods and tactics regarding de-escalation, ramping up the use of body cameras, and reforming law enforcement hiring and disciplinary practices to reduce the number of “bad apple” cops in police departments.

However, Scott’s measure failed in the Senate after Democrats block debate on the bill last summer, criticizing the legislation as inadequate.

Scott had told reporters on Wednesday that the group is now just focused on the language contained in the bill.

“We’re gonna have to now check the definitions and the language that we’re all putting on paper and make sure that we’re all saying the exact same thing, but I don’t think there’s outstanding issues that need to be worked out, we just need to agree on the actual language we’re using,” he said.

Durbin had a different point of view though, and noted that there was much more to negotiate than just the language.

“We felt that way several days ago. But then when you get the staff in the room, they need to have pretty explicit instructions as to what we agreed on, so we have to ask a few more questions, answer before we can reach that point,” Durbin said.

Thursday’s announcement came on the day before the Senate leaves for its two-week July Fourth recess, and also the day before Derek Chauvin, the former Minneapolis police officer who was convicted of murdering Floyd, is scheduled to be sentenced.