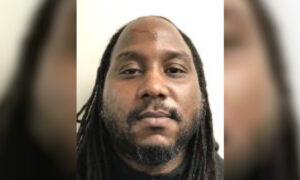 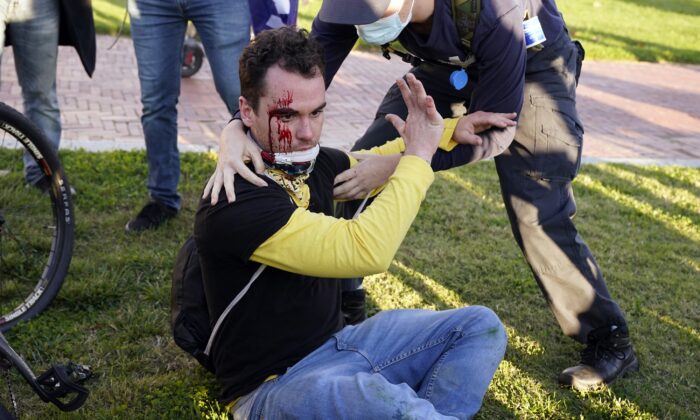 A supporter of President Donald Trump is bleeding after being assaulted by two reported Antifa members, during a pro-Trump rally in Washington on Nov. 14, 2020. (Jacquelyn Martin/AP Photo)
Politics

Federal lawmakers on Nov. 19 called for an oversight hearing into what happened during a recent pro-President Donald Trump march.

The Nov. 14 event in Washington went off smoothly, but as supporters were leaving, they were assaulted by people with ties to Black Lives Matter and Antifa.

“These supporters were exercising their First Amendment right to peaceably assemble within the District of Columbia. The failure of the city’s leaders to afford basic protections to persons who may hold different political viewpoints from their own appears to be another concerning example of viewpoint discrimination in the District,” Reps. James Comer (R-Ky.), Chip Roy (R-Texas), and Jody Hice (R-Ga.) wrote to House Oversight Chairwoman Carolyn Maloney (D-N.Y.).

The lawmakers said Maloney should convene a hearing, citing video footage that showed several members of the far-left Antifa group surrounding and threatening Trump supporters while stealing from them.

A Black Lives Matter activist was also arrested after sucker punching a Trump supporter who had been brawling with others.

“City leaders have remained silent on the violence. This growing level of violence directed at others simply for holding different views is unacceptable,” the representatives wrote.

“It is essential that any group exercising their right to peaceably assemble—no matter their viewpoints—be afforded basic protections against violence. It is also essential that the safety of nonparticipants, as well as property within the District, be protected. Although these are basic and fundamental expectations, the city’s leaders have repeatedly failed and/or refused to meet them. Our committee must conduct oversight to determine whether the District of Columbia has a plan to ensure that violence is not tolerated against those who come to our nation’s capital in the future to exercise their First Amendment rights.”

Washington Mayor Muriel Bowser, a Democrat, hasn’t spoken publicly about the violence since it took place.

A spokeswoman for Bowser didn’t respond to a request for comment, nor did a press secretary for Maloney.

Comer is the ranking member on the House Oversight Committee.

“What we’re trying to do is to make sure that the world knows that this is another example of Democrat hypocrisy,” Comer said during a virtual appearance on Fox Business on Nov. 19, saying lawmakers act as a check and balance to Washington officials.

The Republicans sent a separate letter to Bowser, asking how her office plans to work with police to ensure the safety of those who seek to peacefully exercise First Amendment rights within the District.

“The right to peaceably assemble in our nation’s capital under the First Amendment is paramount. This is true regardless of who is doing the protesting or the popularity or unpopularity of their cause. You claim Washington, D.C. ‘upholds the values of love, inclusivity, and diversity’ but your silence following the violence perpetrated against Americans who support President Trump suggests you apply these principles only for those who share your same political opinions. This is a dangerous precedent,” they wrote.

The committee members asked for information, including whether the mayor’s office is committed to facilitating the rights of all Americans, and under what circumstances the Metropolitan Police Department finds it appropriate to arrest people for rioting.

Twenty-one people were arrested on Nov. 14 or early the next day, according to police records. Police were seeking other suspects captured on camera.