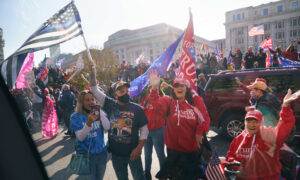 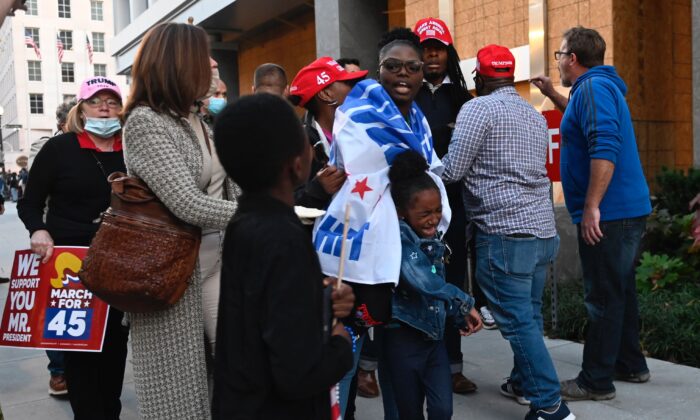 A girl cries after her family, who attended a pro-President Donald Trump march, was harassed by anti-Trump demonstrators in Washington on Nov. 14, 2020. (Andrew Caballero-Reynolds/AFP via Getty Images)
Crime and Incidents

Supporters and likely members of the far-left Antifa network and the Black Lives Matter movement were captured on video assaulting President Donald Trump supporters in Washington on Saturday.

Thousands of Trump supporters turned out for a large march to protest against alleged election fraud. Some pro-Trump marchers also engaged in violence.

While a collection of videos showed chaos and it was difficult to discern who instigated the fights, other footage from reporters on the ground showed anti-Trump protesters assaulting pro-Trump marchers without provocation.

In at least several cases, people affiliated with Antifa or Black Lives Matter were the ones carrying out the assaults.

Trump supporters walking in downtown were assaulted by pro-Black Lives Matter supporters, the Daily Caller’s Jorge Ventura reported. One man was sucker punched by a black male from behind who was holding a sign that said “Trump/Pence Out Now!” video footage showed. The slogan was promoted by Refuse Fascism, a radical left-wing group that, according to the non-profit Influence Watch, is an offshoot of the Radical Communist Party and has been present at many Antifa events.

In another case, a white man wearing a “Trump” shirt was assaulted by people dressed in gear that’s favored by Antifa, an anarcho-communist movement that’s carried out violence across the nation in recent years.

As the assaults took place, the surrounding crowd chanted “Black Lives Matter.” They also chanted, “I didn’t see [expletive],” a chant popular with Antifa and Black Lives Matter, both of which are staunchly anti-police.

In a third situation, a Trump supporter was cut in the head by assailants, described by the Daily Caller’s Richie McGinnis as part of Antifa’s so-called black bloc.

Antifa and Black Lives Matter groups before the march urged people to support counter-protest, with some groups even planning to bus people in from other cities. Hundreds of Black Lives Matter events in the United States this year have turned violent, researchers said in September.

The Black Lives Matter Global Network didn’t respond to a request for comment. Refuse Fascism appeared to blame the violence on Trump supporters.

Antifa shields were held by people on Saturday in anti-Trump crowds that were seen assaulting women, stealing phones from pro-Trump protesters, and setting fires to Trump gear.

The anti-Trump crowds “are literally chasing Trump supporters out of Black Lives Matter plaza,” Christal Hayes of USA Today reported, adding, “Counter protesters are grabbing flags and signs from Trump supporters trying to get out of the area.” Other reporters, including independent journalist Drew Hernandez, reported that violence took place against Trump supporters in and around the plaza.

The two groups have fought in the past, including brouhahas in New York City and Portland, Oregon.

The Metropolitan Police Department didn’t respond to requests for information.

Police told The Associated Press they made 21 arrests for charges including assault and weapons possession. Officers recovered eight firearms. Four officers were injured during the course of the day.

Political commentator Savannah Hernandez, who recorded some of the videos, said during a livestream late Saturday, “I’ve never seen such a blatant attack on Trump supporters.”

Rep. Dan Crenshaw (R-Texas) shared one of the clips on Twitter, writing, “The left uses violence. The right uses their voice. The difference matters. And all the DC businesses that boarded up their windows know exactly what the difference is.”