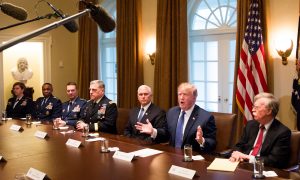 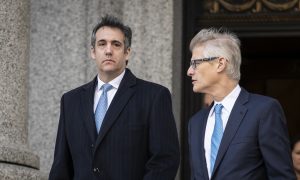 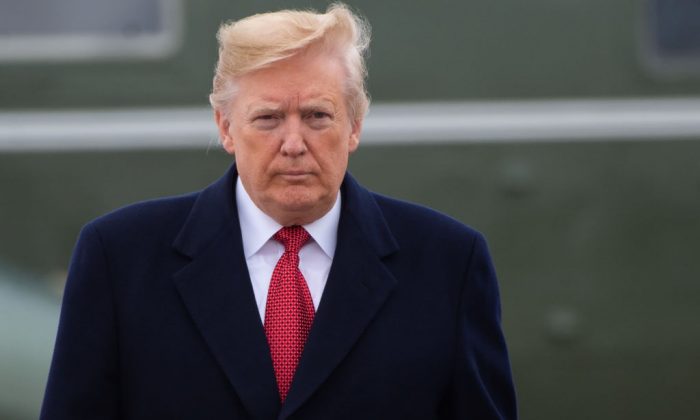 TOPSHOT - US President Donald Trump arrives to board Air Force One at Joint Base Andrews in Maryland, November 9, 2018, as they travel to Paris. (Photo by SAUL LOEB / AFP) (Photo credit should read SAUL LOEB/AFP/Getty Images)
Trump Presidency

The huge array of legal proceedings and investigations now being undertaken against President Donald Trump, his campaign, his transition team, and associates is a carefully orchestrated effort to drive him from office, according to conservatives interviewed by The Epoch Times.

The seemingly endless parade of legal actions against Trump is the legal equivalent of throwing darts at a bulletin board or spinning a roulette wheel. Trump’s enemies will take anything they can get in order to end his presidency, conservatives say.

This white-hot explosion of litigiousness is what is known as “lawfare,” a neologism that is a portmanteau of the words “law” and “warfare.” One online source defines lawfare as “a form of war consisting of the use of the legal system against an enemy, such as by damaging or delegitimizing them, tying up their time or winning a public relations victory.”

The current lawfare effort is an extension in the nation’s legal system of the organized resistance to Trump that left-wing activists, nonprofits, and well-heeled foundations launched immediately after the Republican unexpectedly triumphed over the heavily favored Democrat candidate Hillary Clinton in November 2016.

“This is a full frontal attack on Trump World,” writes William A. Jacobson at Legal Insurrection. Jacobson is a clinical professor of law and director of the Securities Law Clinic at Cornell Law School. “And it’s just a continuation of the refusal to accept the results of the election with a Lilliputian strategy to tie down the giant. The sheer breadth of investigations is the point.”

This well-funded legal conspiracy, as it has been characterized by some Trump defenders, is vast, far-reaching, and subsidized by taxpayers. Most, but not all of the players are Democrats. Some of the federal prosecutors involved were appointed by Trump. But all have come under pressure from Democrats and left-wing activists.

Garrett M. Graff of Wired magazine put together a list of 17 known investigations that target “President Trump’s world from various federal, state, and local prosecutors.” There are sources known to be cooperating with investigators in nearly all of these open cases, Graff said.

Turkish influence on Trump and his circle also is being investigated. Former national security adviser Michael Flynn’s plea agreement provides some details of the allegations. Flynn is cooperating with authorities.

The attorneys general for the District of Columbia and Maryland, respectively Karl A. Racine (D) and Brian Frosh (D), issued subpoenas this month for Trump Organization and hotel financial records related to the almost-impossible-to-prove-allegation that the president is in violation of the Emoluments Clause of the U.S. Constitution. The clause forbids government officials from receiving gifts from foreign states and monarchies without the consent of Congress in the hope of shielding the “small-R” republican character of the United States from corrupting foreign influences.

Finally, there is a mysterious investigation originating from an unknown office, according to Graff. An investigation referenced in the Flynn case could “represent another as-yet-unknown unfolding criminal case or could be a counterintelligence investigation that will never become public.”

Tying Down the President

Of course, it is possible that the president or his associates could be guilty of wrongdoing not yet unearthed or made public, but conservatives contacted by The Epoch Times say the sheer volume of the allegations suggest both prosecutorial overkill and a concerted effort to tie down the president by means of litigation.

Robert Weissberg, a professor emeritus of political science at the University of Illinois at Urbana-Champaign, said Democrats are using the courts to try to bring down Trump because they are bereft of ideas.

“This litigation madness reflects the collapse of viable policy alternatives among Democrats, particularly those on the far left,” Weissberg said.

“Rather than hash out a politically workable solution, the Dems wander off into controversies and investigations.

“This is very different from, say, 50 years ago when Dems still believed in their solutions. Yes, they insisted, Head Start would do the trick and inner-city blacks could become middle class if we just enforced the anti-discrimination laws. What we now see, to be glib, is the end of policy debate.

“The entire Russia thing is a distraction.”

Donny Ferguson, president of Americans for a Better Economy, an Alexandria, Virginia-based nonprofit organization, said there is no evidence Trump personally colluded with Russia to sway the 2016 election, but that doesn’t mean all the investigations are completely meritless.

“Right now, it appears the Mueller investigation is what we always knew it was—several Trump associates not disclosing business ties with Russia,” Ferguson, said. “The only campaign collusion with Russia appears to be from the Clinton campaign and Democratic National Committee.”

Ferguson said Trump’s hush-money payments to women he allegedly had affairs with will continue to cause legal problems for him. When former presidential candidate and Sen. John Edwards (D-N.C.) went on trial years ago, both the judge and jury agreed that payments made to a mistress for silence during a campaign were campaign expenses.

“The prosecution in the Edwards case had no evidence showing it was Edwards himself who convinced two other people to make payments from accounts they controlled,” Ferguson said.

“In Trump’s case, he’s on tape directing the payments from accounts he controlled. They appeared to be corporate accounts, creating another apparent violation.

“The question is whether such violations are impeachable offenses, and that’s far from clear.”

‘Weaponizing the Power of Government’

Robert Henneke, director of the Center for the American Future at the Austin-based Texas Public Policy Foundation, suggested those going after Trump have bad motives.

“You’re weaponizing the power of government in most of these situations involving criminal penalties and criminal prosecutions, where a driving factor seems to be a person or a specific target, or there is a partisan shade to it,” said Henneke, who was on the winning legal team in a lawsuit that led to the striking down of Obamacare by federal Judge Reed O’Connor of the Northern District of Texas on Dec. 14.

“I think certainly with respect to the Mueller investigation, it has questionable legitimacy as it’s way far afield from what the original intent was supposed to be.”

The plea that Trump’s former personal attorney, Michael Cohen, entered after being investigated by Mueller is “questionable,” Henneke said. It isn’t at all clear that “what he pled to is a violation of federal election laws.”

This fast-and-loose approach to enforcing the law can also be used against government officials, he said.

“Where there is a will to do so, you can probably figure out a reason to prosecute any federal official. If you look hard enough, you can interpret campaign finance laws in a way that would result in there being an offense,” Henneke said.

When the administrative state “gets so big and so broad that nobody really knows what is really a crime or not” when you couple that with “politically driven prosecutions for government action, that should be concerning for all Americans.”

Prosecutors in his home state of Texas have abused their powers before, Henneke noted.

Former U.S. House Majority Leaders Tom DeLay (R-Texas) and Dick Armey (R-Texas), and former Texas Gov. Rick Perry (R), who is a now a Trump cabinet member, were hounded for years by prosecutors who ended up having little to show for their efforts, he said.

“James said more or less that ‘I’m getting elected to take away Trump’s money and to go after his businesses,’” he said. “I mean that’s completely contrary to the notion of justice. You don’t want to have a government that picks a target first and then figures out what for afterward.”

Tina Trent, a former candidate for District 26 of the Georgia General Assembly, said the bevy of lawsuits is best understood as one way of demoralizing potential Trump voters and suppressing turnout in the 2020 presidential election.

What’s in the lawsuits, which should be viewed more “as a protest movement than serious legal inquiry,” matters less than their quantity, she said.

“This is Trump derangement syndrome via litigation by a thousand cuts: they are providing left-wing media and their audiences with a steady stream of ‘breaking news’ on alleged new legal scandals, and they really don’t care about the success or even the credibility of any single investigation,” Trent said.

The lawsuits amount to propaganda, she said.

“Propaganda works by overwhelming the senses and crowding out rational debate. The mainstream media in America has been a propaganda mouthpiece for the Left for so long in America that we’ve grown used to seeing bias in news reports, but there is still something new and frightening in watching media personalities ranting hysterically over these Trump investigations in every cranny of social media, late-night talk shows, and even the sections of magazines that are supposed to be about fashion and lifestyle,” Trent said.

Every aspect of Trump’s daily life in the White House is actually being put on display every minute of every day, from the way the first lady decorated their Christmas trees to the allegedly toxic effect Trump is having on individual holiday family gatherings, she explained.

Trump is being accused “of ruining Christmas family gatherings and blighting dating scenes for single adults looking for love” as he is “bitterly and hatefully charged by important media figures with literally destroying everything good in the world and causing everything bad,” Trent added.

An attorney and historian, who asked not to be identified, disagreed somewhat with the other conservatives interviewed.

“It’s a mistake to see this as coming from ‘Democrats,’” he said.

The assault on Trump “comes from inside the Washington bureaucracy, what some people are calling the ‘deep state’ or the ‘swamp.’ It’s a big mistake to associate these people solely with the Democrat Party. They are part of something much larger and more important than the Democrat Party, and the Republican Party apparatus is mostly just as captive to them.”

“But the real reason the intelligence/federal law enforcement people are going after Trump is, in my opinion, that he is capturing the attention of people who are true nationalists, people who understand and are spreading the message that our government is being held captive and would like to do something about it. So, he must be destroyed. Not beaten in an election. That isn’t nearly enough punishment to send the message that they want to send,” he said.