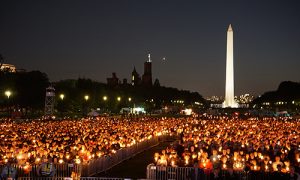 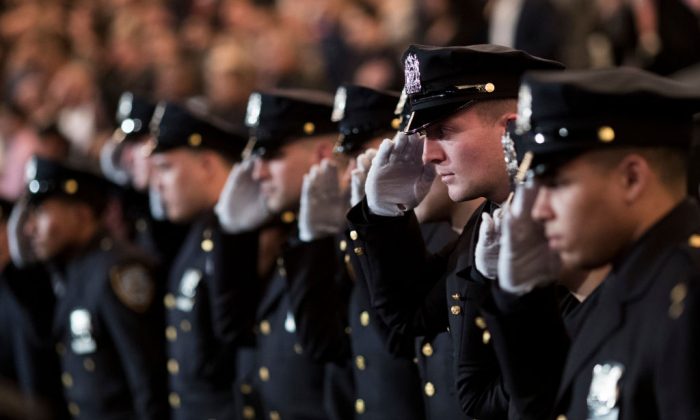 The number of law enforcement officers who died in the line of duty across the United States in 2018 increased by 12 percent over last year, led by a rise in firearms-related fatalities, according to preliminary data compiled by the National Law Enforcement Officers Memorial Fund.

The nonprofit organization’s end-of-year report, which tracks officer fatalities, shows that as of Dec. 27, a total of 144 federal, state, local, tribal, and territorial officers died on the job this year. In 2017, there were 129 officer fatalities.

Craig Floyd, CEO of the Memorial Fund, told The Epoch Times in an interview that the rise in deaths can be attributed to several factors, and that more needs to be done to protect officers.

“Unfortunately, we saw increases in all categories of deaths, so it’s hard to pinpoint one reason over the other,” he said. “In fact, we haven’t seen a year since 1994 that there have been fewer than 100 officers killed in any single year.”

The leading cause of death this year was firearms-related fatalities, with 52 officers shot and killed. That was a 13 percent increase from last year’s 46 fatalities in the same category. States with the highest number of shooting fatalities were Texas, Florida, New York, and California, with 11 deaths each.

Of those killed by firearms, handguns had a role in 31 deaths.

Officer Ronil Singh of Newman, California, was shot and killed on Dec. 26 during a traffic stop. The suspect is still at large.

Floyd said that over the past 20 years, traffic-related fatalities were the usual No. 1 cause of death. He called this year’s number of firearm fatalities “troubling.”

“Clearly, we still have a lot of work to do,” he said. “De-escalation training is being emphasized to agencies across the U.S. The idea is how do you take a potentially volatile situation and de-escalate the volatility, keep things calm before they can get to a higher level of agitation and violence occurring.”

Of the 52 officers killed by firearms, the largest portion—14—took place during an attempted arrest, while eight others were shot dead while conducting an investigation.

Deaths From Other Causes

In one such case in July, officer Jared William Franks of the Greensboro, North Carolina, Police Department, was killed in a car crash while responding to a robbery-in-progress call.

Deaths from other causes also increased.

Job-related illnesses, such as heart attacks or strokes, were the cause of 33 officer deaths, a 57 percent increase over last year’s 21; of the 33, 15 officers died from cancer stemming from search-and-recovery efforts following the World Trade Center terror attacks on Sept. 11, 2001.

In November, New Jersey State Police Trooper Robert E. Nagle succumbed to an illness stemming from his assignment in the recovery efforts following 9/11.

Floyd, who said the average number of 9/11-related fatalities each year is 11, described this year’s 15 deaths in that category as “particularly troubling.”

“Seventeen years ago, 72 officers died that day during the rescue efforts. But since then, we have lost 184 officers who were at the terrorist attack sites during the weeks and months afterward, during the recovery efforts,” Floyd said. “I’m afraid that number may grow in the years ahead.”

Floyd emphasized that President Donald Trump’s strong public support for law enforcement has helped the nation’s attitude toward officers improve as a whole, despite the negative representation of some individual cases.

“I think the president has expressed great appreciation for law enforcement. He has thanked them in a very vocal way. He goes out of his way in just about every speech he makes,” he said. “I think that’s gone a long way to help boost morale among law-enforcement professionals, makes them feel appreciated and respected.

He said Trump’s comments have helped officers in their efforts to serve and protect their local communities.

“When the leader of our nation makes those kinds of supportive statements, it goes a long way in restoring confidence. I think he has certainly made his voice heard loud and clear.”