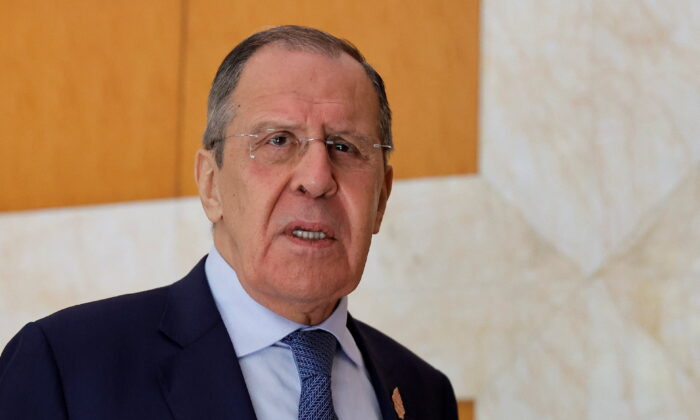 LONDON—Russian Foreign Minister Sergei Lavrov said on Wednesday that Moscow’s military “tasks” in Ukraine now went beyond the eastern Donbass region, in the clearest acknowledgment yet that its war goals have expanded in the past five months.

In an interview with state news agency RIA Novosti, Lavrov said geographical realities had changed since Russian and Ukrainian negotiators held peace talks in Turkey in late March that failed to produce any breakthrough.

At that time, he said, the focus was on the Donetsk and Luhansk People’s Republics (DPR and LPR).

“Now the geography is different, it’s far from being just the DPR and LPR, it’s also Kherson and Zaporizhzhia regions and a number of other territories,” he said, referring to territories well beyond the Donbass that Russian forces have wholly or partly seized.

“This process is continuing logically and persistently,” he said, adding that Russia might need to push even deeper.

If the West, out of “impotent rage” or desire to aggravate the situation further, kept pumping Ukraine with long-range weapons such as the U.S.–made High Mobility Artillery Rocket Systems (HIMARS), “that means the geographical tasks will extend still further from the current line,” Lavrov said.

Russia could not allow Ukrainian President Volodymyr Zelenskyy “or whoever replaces him” to threaten its territory or that of the DPR and LPR with the longer-range systems, he said—referring casually, and without any evidence, to the possibility that the Ukrainian leader might not remain in power.

The foreign minister is the most senior figure to speak openly of Russia’s war goals in territorial terms, nearly five months after  Russia launched its invasion.

Russia’s defense ministry said on March 25 that the first phase of its “special military operation” was complete and it would now focus on “achieving the main goal, the liberation of Donbas.”

Nearly four months later, it has taken Luhansk, one of two regions that make up the Donbass, but remains far from capturing all of the other, Donetsk. In the past few weeks, it has ramped up missile strikes on cities across Ukraine.