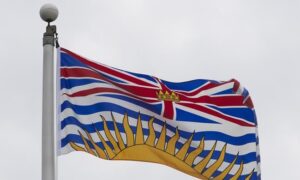 Laurence Fox, the leader of the recently established Reclaim Party—whose name plays off the idea that culture has been captured by the politically hyper-correct and needs reclaiming—has announced he is running for mayor of London.

Calling the decision “slightly daunting, but needed,” Fox told the American Thought Leaders program in a March 4 interview that he’s running “to say it’s important that we have a full debate within society” on political correctness and freedom of speech, and to ensure that “one set of views is not silenced or cancelled in order to not offend other people.”

Fox decried the illiberal surge of wokeism in Great Britain and said its impact on various spheres of public life threatens to upend policymaking.

“Similar to America, the United Kingdom is really struggling with the principle of freedom of speech,” Fox said. “And it’s affected everything from our handling of the COVID crisis to the handling of how we deal with our historical heritage,” he said.

He blamed “what we loosely call wokeism, but is essentially progressivism” on a range of questionable phenomena in British society, echoing a recent op-ed he authored in the newspaper Express.

“From the tentative non-investigation of the Rotherham grooming gangs, to the two-tiered policing of political protests, to the silencing of eminent scientists in the COVID debate, to people losing their jobs for holding the wrong views. There are real victims in these stories,” Fox wrote.

Without a “full debate” on free speech and cancel culture, “we cannot make good decisions on a personal, public or government level,” Fox told American Thought Leaders in the interview.

Fox, an actor, made headlines in September 2020 when he announced he was founding the Reclaim Party, which he said in a statement was born out of a “desperate need of a new political movement which promises to make our future a shared endeavour not a divisive one.”

He sparked controversy in January 2020 during an appearance on British television, where he clashed with Rachel Boyle, a researcher on race and ethnicity at Edge Hill University in Lancashire, over media coverage of Meghan Markle, the Duchess of Sussex. Fox insisted that negative media coverage of Markle was, unlike Boyle claimed, not rooted in racism, and said it was “racist” for Boyle to call him “a white, privileged male.”

“No, that’s just not true,” Fox said of the claim that Markle had been bullied out of the UK by racism. “There’s a huge amount of goodwill towards Megan Markle, and Prince Harry in the UK. And then the woman proceeded to call me a white privilege male,” he told American Thought Leaders.

“So I said to her, I think that’s direct racism. And then everything exploded,” he recounted.

Asserting his stand on the limits of the free speech debate, Fox said, “I think one needs to accept that you have the right to offend and you do not have the right not to be offended.”

Fox also denounced what he said was a progressivist hypocrisy which elevates the historic sins of the West, such as slavery, but downplays the misdeeds of those more closely ideologically aligned with the leftist movement, such as genocide perpetrated by the Chinese communist regime in Xinjiang or forced organ harvesting from members of the Falun Gong spiritual group across China.

“It doesn’t balance the idea of genocide of the Uyghur Muslims in China, compared to the way that we look at ourselves as a culture and how we operated in the past,” Fox said.

“We seem in Western civilization and Western free democracies to have reached this sort of apotheosis of, we have now we’ve worked everything out where it’s all our fault, and we’re very sorry,” he said.

“So there’s a desire to tear down what we are, rip it away, and feel ashamed. But at the same time, you’ll allow a global superpower to commit horrendous acts of genocide against people and it’s fine,” he said.

“It’s worrying, actually,” he said. “It feels like the rise of a new religion, a new secular religion, as Douglas Murray says, with no redemption and no forgiveness.”