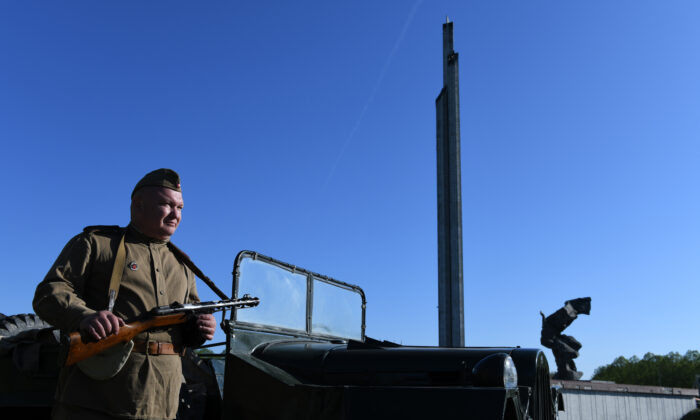 A man in historic uniform attends festivities to mark 74 years since the end of World War II and to commemorate the Soviet victory over Nazi Germany, at the Victory Monument in Riga, Latvia, on May 9, 2019. (Ilmars Znotins/AFP via Getty Images)
Europe

Authorities in Latvia began dismantling a Soviet-era monument in the capital city of Riga on Tuesday after the country’s government agreed that communist monuments in public spaces should be removed.

The statue, which commemorates the Red Army’s victory over Nazi Germany, was erected in 1985 and stands like a high-rise in downtown Riga’s Victory Park. It has been cordoned off by police.

Riga city’s Executive Director, Janis Lange, confirmed during a press conference on Monday that the monument will be bought down on Tuesday after its demolition was ordered by the Latvian Parliament in May, shortly before a law was passed granting the removal of Soviet-glorifying objects throughout the country.

The Riga City Council ordered its demolition shortly after. Lange said authorities would avoid using explosives to bring down the statue.

It was not immediately clear what would happen to the monument after it is taken down.

The statue was built while Latvia was still part of the Soviet Union and consists of an 80-meter (260-foot) concrete spire with a Soviet star on top, and two groups of statues beside the edge of a pond: Mother Motherland and a band of three soldiers. It was designed by sculptors Levs Bukovskis and Aivars Gulbis.

Many in Latvia’s ethnic Russian minority, a group that makes up about a quarter of the country’s 1.9 million people, have embraced the monument and gather in front of it to lay flowers on Russia’s annual Victory Day holiday on May 9.

However, many Latvians view it as a symbol of Soviet occupation, and thus the event has caused controversy in Latvia, which became a member of the European Union and NATO after regaining independence in 1991.

Its planned demolition prompted the Latvian Russian Union to announce over the weekend that it planned to stage protests against the move on Monday evening. However, Lange told reporters that the Riga City Council would not issue them a permit to hold such a protest.

The demolition of the statue in Latvia, which shares a 214-kilometer (133-mile) border with Russia, comes less than a week after neighboring Estonia removed a similar landmark in response to Russia’s invasion of Ukraine.

Estonia’s Prime Minister, Kaja Kallas, said during a press conference on Aug. 3 that Soviet monuments in public spaces across the country would be removed “as quickly as possible.”

There are reportedly 200 to 400 Soviet-era memorials or monuments still standing across Estonia.

“The specific time and order depends on the readiness and logistical plans of local governments; logistics require exactly the same consideration, organization, and the involvement of the private sector,” Kallas said.

“It is clear that Russian aggression in Ukraine has torn open the wounds in our society that these communist monuments remind us of and therefore their removal from public space is necessary to avoid additional tensions.”

Authorities in Estonia on Aug. 16 took down a replica of a T-34 tank from its pedestal outside the city of Narva in Estonia’s Russian-speaking east and took it to the Estonian War Museum in Viimsi, a town north of the capital, Tallinn.