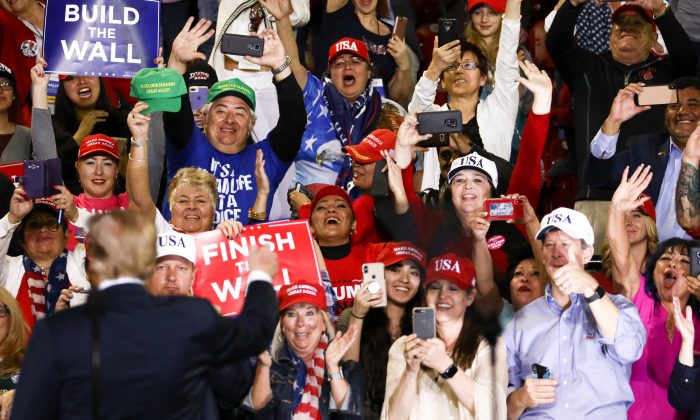 A California man told a Fox 11 reporter that he and his family have been targeted by a deluge of racist letters after moving into a new neighborhood in Pico Rivera and manifesting their support for conservative causes and President Trump.

Victor Gonzalez, who told Fox 11’s Bill Melugin he is a Latino Republican, says he suspects his politics may have something to do with the hate mail flooding his mailbox.

Gonzalez told the outlet that it has been about two weeks since the most recent piece of racist correspondence targeted his family.

He quoted from a letter: “You people have made this neighborhood look like a ghetto in East L.A., are all of you from Mexico…you’re living like a bunch of [derogatory term for Hispanics],” and “Nobody knows you wet backs, how did you escape the caravan in Tijuana.”

Another letter allegedly says that “you belong behind a wall with the rest of [your] people…so get the hell out.”

Gonzalez said all of the letters are signed as “The Neighbors.”

“We are hard-working people, my family is a hard-working family, we don’t deserve this,” Gonzalez told Fox 11, adding that while he has stepped up security at his home, his family lives in fear.

Gonzalez said he has contacted the police and the matter is being investigated.

Fox 11 posted the story on its Facebook page, where it sparked many emotional reactions.

A commenter self-identified as Chica Chavez, wrote: “I have no doubt that he is being treated this way, as a conservative the only people that have said hateful, rude, and racist things to me have been other minorities who can’t stand to see someone with a mind of their own and doesn’t play identity politics.”

“He’s an American and has the right to his opinions, views, and choices!” wrote another.

“Isn’t this the United States? Just because you don’t like Trump you find this type of behavior o.k. Freedom of Choice is under attack by the left in this country. I’m not necessarily a Trump supporter but I believe in people having a choice to support who they want without being harassed,” another commenter wrote.

Attacks Against Trump Supporters ‘Swept Under the Rug’

An op-ed by USA Today’s Gil Smart noted in March that “hate against Donald Trump’s supporters sometimes gets swept under the rug,” adding that “recent attacks against individuals wearing ‘Make America Great Again’ hats have failed to make it to the national news media cycle.”

Smart argues that opposition to any political figure should be expressed within the bounds of peaceful discourse—not violence.

“The bigger issue is this: We don’t assault one another in this country because of our political views,” Smart writes.

The National Review, a conservative publication, spoke to the attorney for Hayden Williams, a student who was sucker-punched at U.C. Berkeley’s Sproul Plaza on Feb. 19, while manning a table with the signs: “Hate Crime Hoaxes Hurt Real Victims” and “This is MAGA Country.”

“This is the very epitome of fascism,” said Harmeet K. Dhillon, Williams’s attorney. “The use of violence to silence your opponents and making people afraid of expressing their views.”

The Epoch Times covered the story of Williams’s assault and his alleged assailant’s subsequent arrest.

Conservative radio talk show host Mark Levin, who penned the New York Times No. 1 bestseller “Unfreedom of the Press,” shared a story written by Breitbart’s John Nolte, the thrust of which is a rap sheet of documented acts of violence against Trump supporters, which now number 639.

“Hundreds of acts of violence and threats against Trump supporters,” wrote Levin in the caption, sparking emotional comments.

“It’s a shame that so many feel they can’t openly be conservative, republican, or support a republican president without getting attacked- whether verbally or physically. Who are the fascists again?” one person commented.

“It’s the same old story……. Democrats accuse Republicans of acts of violence while they beat up and threaten Conservatives far more often. The mainstream media ignores their acts. Then, ironically, Liberals have to stage “violent attacks” against themselves to demonstrate that they are targets of Trump supporters and make it appear that violence is one-sided.🙄 It’s pathetic!” another wrote.

Support for Trump Among Hispanic Voters

A series of polls conducted this year found that President Donald Trump’s approval rating among Hispanic voters has reached or approached 50 percent.

A March poll by national survey research company McLaughlin & Associates revealed (pdf) that 50 percent of Hispanics approve of how Trump is handling his presidency.

Trump often touts the record low unemployment rates among Hispanics and others, including African Americans and Asians, at his “Make America Great Again” campaign rallies.

In February, the national seasonally-adjusted unemployment rate for Hispanics and Latinos aged 16 and up in the U.S. labor force dipped to 4.3 percent, a record low, according to data from the Bureau of Labor Statistics. The bureau first began tracking employment data among Hispanic-Latinos in 1973.

The data marked an improvement over January’s unemployment rate, which reached 4.9 percent.

Additionally, the total number of Hispanics employed in the United States reached a record high of 27,701,000 in December last year.

Yearly data on the Hispanic poverty rate was also positive.

In 2017, the rate of poverty had declined overall, but for Hispanics in particular, the rate was one of the largest year-to-year drops across demographic groups, shedding 1.1 percentage points from 2016, according to the annual report, “Income and Poverty in the United States: 2017.”