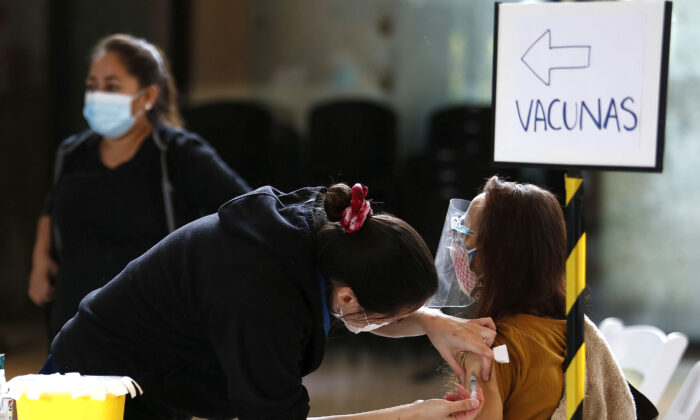 A health worker vaccinates a citizen over 60 years old with the Sinovac vaccine on March 19, 2021, in Santiago, Chile. (Marcelo Hernandez/Getty Images)
Americas

Low vaccination rates, in part, are the result of a history of forced sterilizations and unethical medical experimentation, which has created distrust of Western medical initiatives by indigenous populations.

In Peru and Bolivia, indigenous women of the Andes endured forced sterilizations at the hands of both local government and foreign organizations.

Peruvian President Alberto Fujimori sterilized 272,028 indigenous women, the majority without consent, from 1996 to 2001.

Fujimori said his infamous “family planning” project was a means to give women the ability to make decisions without the burden of unplanned pregnancy.

However, Peru’s human rights ombudsman’s office revealed in 2002 it was nothing more than a stratagem to control birth rates among poor, indigenous populations in order to fight off “resource depletion” and “economic downturn.”

Fujimori is currently serving a 25-year prison sentence in Peru for crimes against humanity carried out during his regime.

“It’s a challenge, fighting a legacy like that,” Maria Cabrera, a nurse working in Arequipa, told The Epoch Times.

Cabrera said that despite having more than half of the country fully vaccinated against COVID-19, there are groups of resistance in the Andean highlands.

“Rural communities in these areas [the Andes] were most affected by Fujimori’s regime, so they don’t trust anything they’re given by the government now,” she said.

In 2017, then-Bolivian President Evo Morales reminded the world of the unauthorized sterilization of Andean indigenous women by U.S. Peace Corps workers in 1962, which was done under the guise of offering “medical assistance” in rural communities.

A documentary film released in 1969 by Jorge Sanjinés called “Yawar Mallku” exposed the sterilization program, which triggered outrage and violence against the volunteers in rural communities.

Today, many members of the Quechua and Aymara indigenous communities in Bolivia laugh at the idea of being vaccinated against COVID-19.

“When my father found out what happened, he didn’t want any of our family to get vaccinated. Ever.”

In Guatemala, members of the U.S. Public Health Service and local doctors conducted medical research without consent by deliberately infecting 1,308 locals with syphilis from 1946 to 1948, which became famously known as the “syphilis experiments.”

Dr. Manuel Gatica, who has participated in clinical investigation and works for the Guatemalan Institute of Social Security, says locals are still used as guinea pigs in medical experiments.

“Researchers are not injecting people with disease [anymore], but are exposing them to medications that they are not familiar with.”

Distrust of Western pharmaceuticals runs so deeply in the country that 500 locals attacked two mobile vaccination brigades and health care workers on Oct. 4 in the community of Maguila, in the province of Alta Verapaz.

Locals destroyed 50 vaccine doses and attempted to lynch the health care workers before police arrived to negotiate their release, according to the ministry of public health.

Director of services for the ministry of public health, Eliú Mazariegos, said, “We tried to explain several times the vaccine is voluntary and we didn’t want to force it on anyone, but they wouldn’t let us work.”

Unsurprisingly, Guatemala has one of the lowest COVID-19 vaccination rates in Latin America, with only 24.1 percent of the population fully vaccinated.

“There’s no denying the pandemic at this point. This virus is killing people,” Cabrera said.

However, she explained it was impossible to argue with someone who had a family member or knew someone who was victimized under Fujimori’s medical program.

Cabrera added that side effects from the vaccine, such as headaches and fever, don’t help health care workers in their efforts to increase vaccination rates since the effects tend to scare already skeptical locals.

Deaths from COVID-19 in Latin America and the Caribbean surpassed 1 million people in May, according to the Pan American Health Organization.

“You can’t honestly expect people to trust this vaccine. Not after what’s been done in my country,” Mexico City resident Juan Garcia told The Epoch Times.

Garcia supports vaccine resistance from his neighborhood, Roma Sur, in the nation’s capital and attends organized demonstrations against the injections, one of which occurred outside the ministry of health’s office in August.

He pointed to incidents of medical coercion and forced sterilizations as evidence his people couldn’t trust the government.

In 1998, the Guerrero Ministry of Health dispatched officials to predominately indigenous towns in the Costa Chica region and told the men if they were willing to undergo sterilization, a health clinic would be built in their town.

“We keep hearing ‘trust science’, but what they’re really asking us to do is trust the government,” Garcia said.