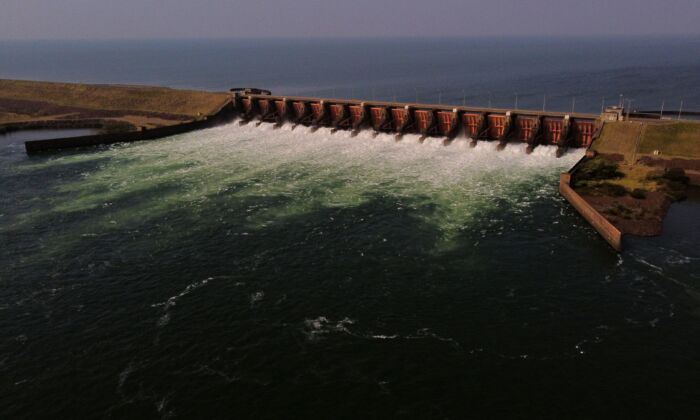 Aerial view of the water dumps of the Ana Cua arm of the Parana River, which water level reached a historic low, at the Yacyretá Dam in Yacyretá, Itapua, Paraguay, on Aug. 18, 2021. (JUAN MABROMATA/AFP via Getty Images)
Americas

SANTA CRUZ, Bolivia—Only a year after the Paris Climate Agreement was adopted in 2015, Latin American countries quickly gained recognition for boosting existing “green energy” initiatives and paving the way for new ones to follow.

Yet over the past six years, negative environmental consequences from projects such as hydroelectric dams and mining operations to supply the manufacturing side of sustainable power have cast a shadow across the landscape of green energy use in the region.

When it comes to conservation, regional governments have largely overlooked the threats created by rapid growth in the energy sector and poor production infrastructure.

Hydroelectricity is one of the oldest forms of renewable energy and for years has been a go-to method for addressing water shortages in the Americas. However, the environmental blowback from these initiatives can actually create water shortages, according to some scientists.

One study on the relationship between drought and hydro projects, conducted by Ted Veldkamp at Amsterdam’s Vrije University, shows that $2 trillion spent on global dam initiatives over the course of four decades actually left 23 percent of the population with less water.

Brazil, Argentina, Chile, and Paraguay already rely heavily on hydroelectric power and are also suffering from years of aggravated drought conditions—particularly in the regions with active hydro plants.

In January, Paraguayan President Mario Abdo Benítez announced that the country now generates all of its electricity via hydroelectric facilities, which increased production starting in 2016. Today, severe drought conditions afflict the Paraná River, where the nation’s largest dam—Itaipu Dam—is located. Interestingly, the drought conditions began only a year after the facility started increasing its output in the region.

“No one is looking at the actual impact of these projects,” former Amazon Program Director for International Rivers Brent Millikan told The Epoch Times.

Millikan pointed to the Belo Monte Dam in northern Brazil’s Para state as an example of a hydro project disaster. Since its construction in 2013, the facility has caused significant harm to the Xingu River, wildlife, and indigenous communities that rely on the waterway. The facility has also fallen short of the energy output originally promised by the builders.

Presently, Brazil generates 66 percent of its power from similar projects.

Hydroelectricity is also a priority in Chile, which aims to create 70 percent of its power from renewables by 2050. The nation’s hydro plants are located in areas suffering from significant drought conditions, which has hit agribusiness industries hard.

This is another elephant in the room: the effects of dam-induced drought on agriculture and food production.

In a 2018 study conducted by drought scientists at Sweden’s Uppsala University, one of the findings shows an increased demand for water and usage as an unexpected byproduct of hydroelectricity. Some believe that this is complicating existing scarcity issues.

Science aside, drought-stricken Argentina is operating an astonishing 33 hydro plants, with plans for another 35, including a controversial dam in Patagonia that—after much protest and controversy—China will help complete.

When it comes to Chinese investment, analyst Fernando Menéndez told The Epoch Times that it’s no surprise that the Asian nation supports renewable energy initiatives in Latin America.

“They’re in the business of selling the manufactured end, so they’ll happily sell you the hydroelectric plant,” he said.

Menéndez noted that China’s investment in these projects helps their global image.

Chile attempted a similar Patagonia dam initiative in 2011 called the HidroAysén project, which proposed building two large hydroelectric facilities in the remote Aysén region. The government overturned this measure in 2014, after weeks of massive opposition protests hampered any progress.

Millikan noted another flaw in the hydro equation. Viability studies, which are normally done during the planning phase, aren’t being conducted by objective parties looking at consequences outside of initial profit margins, he said.

Still, some experts say that hydroelectricity may be a necessary evil.

“If you look at some of the most dramatic proposals for a pathway to zero carbon … they all need to incorporate a significant build-out of hydropower,” said John Parsons, an energy economist with the Massachusetts Institute of Technology’s Center for Energy and Environmental Policy Research.

However, Parsons also admitted that “people are right to think of hydro as a low-carbon resource, but the variability is very high, and there are some reservoirs that have lifecycle emissions of greenhouse gases that are higher per unit of electricity produced than a fossil plant.”

Creating a Legacy of Pollution, Protests, and Debt

Mining projects and opposition protests go hand in hand in Latin America, especially in countries such as Peru, Ecuador, Bolivia, and Brazil. Demonstrations targeting extraction operations continue to make regional headlines because of heavy contamination, particularly of waterways used by indigenous communities in the Amazon. Initiatives required to unearth elements for manufacturing renewable generators such as solar panels and wind turbines are leaving a significant footprint that, according to one analysis, is going to get worse.

The production of minerals such as graphite, lithium, and cobalt could increase by 500 percent by 2050 to meet the burgeoning demand for clean energy, according to a World Bank Group report. The report also estimates that more than 3 billion tons of minerals and metals are needed to run wind, solar, and geothermal power, in addition to energy storage requirements, to hit the target reduction of two degrees Celsius in global temperature.

Complicating matters is mismanagement of the administrative end of the mining industry, despite considerable regulations. A comparative study of mining controls in Chile, Bolivia, Mexico, Brazil, Peru, Colombia, and Ecuador published in 2021 shows that the existence of mining regulations in the region had no effect on the number of environmental accidents occurring.

Wind farms in Chile account for 19 percent of the country’s energy matrix, but they’re buried under a mountain of outstanding bills. The Santiago-based Latin America Power company issued $403 million in senior secured notes in June 2021 to refinance the crippling debt tied to the nation’s wind farms.