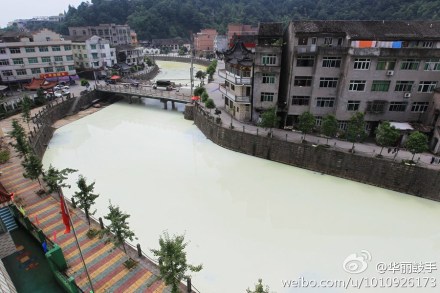 Natural latex polluted more than a mile of a stretch of the Quxi River in China’s Wenzhou City, Zhejiang Province, turning it into what was described as a “river of milk,” according to Zhejiang Online news, a leading provincial website.

“Only yesterday, I was doing my laundry in the river, and yet this morning it’s turned completely white, as though somebody poured milk into it,” local Xiao Wu said of the incident, which took place on Monday.

Another local, Zhou Dabo, told the website that when he went for a morning jog at around 4 a.m., he noticed that something about the color of the river water was amiss. He then approached the riverbank and realized that the river had turned white.

“A layer of a white oily substance was floating on the surface of the river, and it seemed as if it had been mixed with milk,” he recalled. However, as he walked farther downstream, “the water began to turn green and smelly,” Zhou said.

The head of the local Environmental Protection Office, Dai Dongpeng, blamed the pollution on the Daxulin Trading Company, which loads and unloads latex.

Zhejiang Online interviewed the person who was in charge at the company, Mr. Zhang, who said around “one or two hundred kilograms” of latex also flowed into the sewers. Zhang did not think the leak was a big problem since it had not attracted much attention.