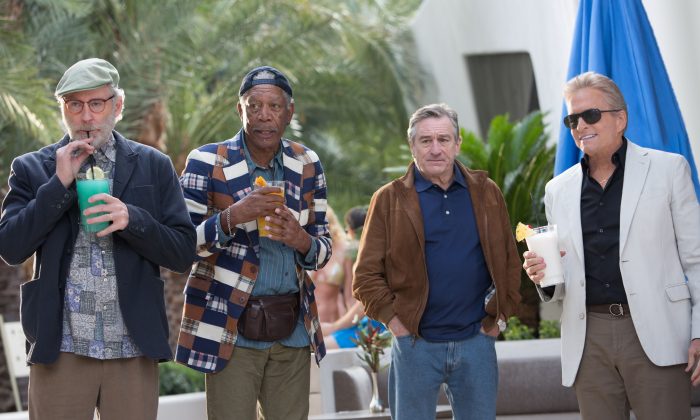 How do you take four of America’s most accomplished powerhouse actors, and put them in a comedy-lite old-fogey cheese-fest? It’s akin to turning Led Zeppelin into dentist-office music. Wait… no. That might actually be funny.

The comedy-dud that is “Last Vegas” is more or less insulting to all actors involved, except maybe “Fiddy,” aka “50-Cent,” aka Curtis Jackson. He’s still more rapper than actor, plus he’s only onscreen for 10 seconds.

But you know what? That’s the actor’s life. If you wanna work, you eat what they put on your plate. Pretty much. Especially if you’re getting to be of a certain age and your star is waning. The actor trick here is to survive with dignity. Let’s see who survives “Last Vegas” with dignity.

De Niro’s grouchy character Paddy is obsessed with his dead wife. Freeman’s happy Archie is a (prescription) pill-popping granddad living with junior. Kline’s goofy Sam is doing the same with his scary face-lifted wife in retirement-land, USA (Florida), and Douglas’ slick Billy is hanging onto his youth by his fingernails. He’s getting set to marry a woman half his age.

That last bit is how this whole sad mess gets started. It’s “The Hangover” for the G-rated crowd (G for “geriatric”). They’re all going to Billy’s wedding. But first there’s the bachelor party.

Oh wait—before that, there’s The Flashback. Back to when they were “The Flatbush Four,” wee buddies growing up macho-cutesy in Brooklyn. How come they don’t have one good Brooklyn accent between the four of them? Never mind.

Now back to the bachelor party: In the words of Sam, they’re gonna “party like it’s 1959.” Yukkity-yuk. Yuck.

By the way, the best sight-gag of the movie is Archie escaping to the bachelor party, out his son’s bedroom window. There’s tension! Can his old, post-stroke legs handle the drop? Will he go for it? He’s high-flyin’! Out the window! Four feet down. It’s the second funniest thing in the movie. We won’t give away the first funniest. For that scene alone, Morgan Freeman survives “Last Vegas.”

Kline gets to trot out his best curse word a couple of times, the one he’s known for, the one that put him on the comedy map in “A Fish Called Wanda.” It doesn’t work here. But Kline survives “Last Vegas” with a smidgen of dignity.

Poor De Niro has to endure a scene of rather demeaning vulgarity at a poolside contest. We’re afraid he does not survive “Last Vegas” with his dignity intact. One would have liked to hear him say, Travis Bickle-like, “Are you sticking that in my face?” Or at least have heard he’d shouted at the director, stormed off the set, and gotten fired. Anything but this scene.

Michael Douglas’s Billy doesn’t get too many funny lines, and in a script this thin, that means he gets nothing.

Plus he’s saddled with the conflict of an ancient grudge from DeNiro’s Paddy that’s way too heavy for this silly movie.

But he takes his role seriously; he cries when he has to, he demonstrates professionalism. Douglas survives “Last Vegas” with a smattering of dignity.

Mary Steenburgen as a Vegas lounge singer who sparks a new competition between Billy and Paddy, pretty much steals the entire movie with one hand tied behind her back.

“Last Vegas” is a bland Hallmark card of a “Grumpy Old Men” wannabe. Can we have a do-over please? Can we get a truly talented screenwriter to throw down a sidesplitting script for these guys?

Michael Douglas at the top of his comedy game will kill you. Ditto Kevin Kline. Remember DeNiro in “Midnight Run?” Can you imagine those guys with juicy roles, and Morgan Freeman, king of the hilarious voice-over, bouncing off all that talent? That’s an old-dude film that would put us all in the grave from guffaw-induced brain aneurisms and myocardial infarctions.

To be fair, most moviegoers will find this to be a fairly funny movie. But if you’re a comedy snob (this reviewer is a comedy snob) and appreciate only high-quality comedies, brilliant comedic acting, and stellar comedy scripts, “Last Vegas” will get on your last nerve.