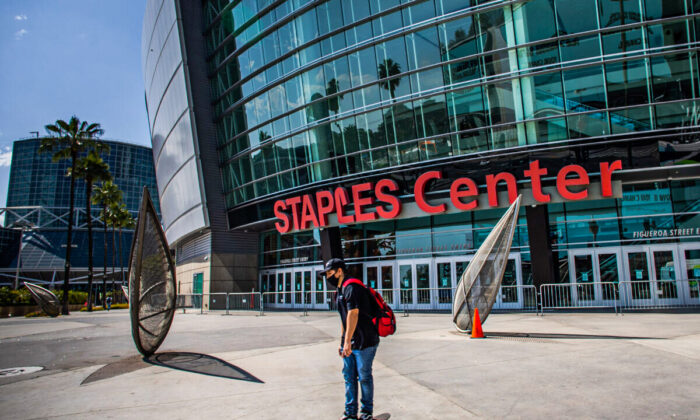 A man wearing a mask skates in front of the Staples Center in downtown Los Angeles, Calif., on May 9, 2020. (Apu Gomes/AFP via Getty Images)
Southern California

The venue, which opened in 1999, will be called Crypto.com Arena for the next 20 years following a deal between the Singapore cryptocurrency exchange and Staples Center owner Anschutz Entertainment Group (AEG).

“Recognizing these technologies will be at the forefront of powering the future of culture, creativity, and entertainment in Los Angeles,”the Staples Center and AEG said in a joint statement.

The new name as well as the new logo and other branding will be unveiled on Christmas Day when the Los Angeles Lakers host the Brooklyn Nets, according to the statement. All of the center’s external signage will be replaced by June 2022.

The new deal includes official designations across Crypto.com Arena, L.A. LIVE, Microsoft Theater, The Novo, the Los Angeles Lakers, and the LA Kings, which will strategically place the digital currency exchange “at the forefront of the global sports and live-entertainment industry for the next 20 years.”

While the statement did not say how much Crypto.com, which was founded in 2016, had paid for the deal, Bloomberg reported that it is worth more than $700 million over the span of 20 years.

“This partnership represents the fastest-growing cryptocurrency platform and the biggest sports and live entertainment company in the world converging to drive the future of sports and live entertainment as well as the incredible legacy of this arena for decades to come,” said Todd Goldstein, chief revenue officer of AEG. “It marks an exciting new chapter in the history of our company and our respective industries, and we couldn’t be more thrilled to have such a visionary partner like Crypto.com supporting our global fan base and local community.”

Crypto.com Co-founder and CEO Kris Marszalek said the company is “very excited” to be partnering with AEG and investing in the city of Los Angeles “long-term,” starting with the newly-named Crypto.com Arena and “using our platform in new and creative ways so that cryptocurrency can power the future of world class sports, entertainment and technology for fans in LA and around the world.”

The Singapore-based platform, where people can buy and sell cryptocurrency, has been aggressively pursuing sponsorship deals within the sports world, including partnerships with UFC, Paris Saint-Germain, the Italian Football league, and the NBA’s Philadelphia 76ers, among others.

In October, the crypto platform rolled out a new advert featuring Hollywood actor Matt Damon in its first global campaign to formally introduce the platform to users.