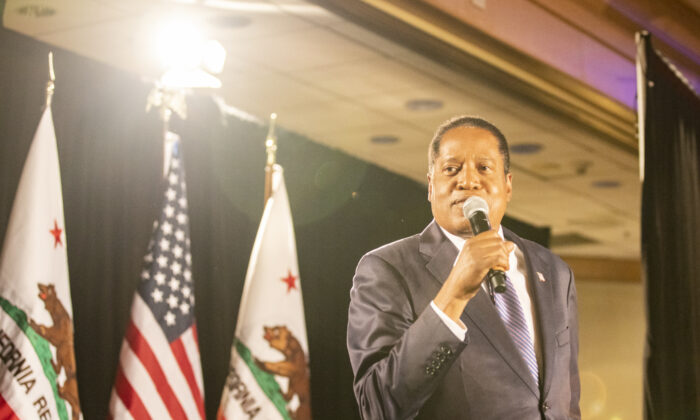 LOS ANGELES—Republican radio talk-show host Larry Elder announced on Jan. 4 that he will not run against Gov. Gavin Newsom for California governor this year.

“The electoral map in California is daunting,” Elder told The Epoch Times in an email. “There hasn’t been a single Republican elected statewide in California in almost 20 years.”

Though last September’s recall effort—rejected by about two-thirds of voters—failed to remove Newsom, Elder was supported by over 48 percent of the approximately 7.4 million voters who selected a replacement candidate, making him the most-voted candidate among 46 others in the race.

“I ran for governor because I wanted to make a difference,” Elder said in a statement. “While I may not know what the future holds for me politically, our campaign’s ability to attract millions of votes and millions of dollars in a very short time demonstrates we have a message that resonates with Americans, and I believe we can put that to good use.”

His recall campaign drew about $22.5 million within two months, which now goes to Elder for America, a political action committee (PAC) he just launched to help the Republican Party prevail in federal and local elections.

“All funds from my recall campaign that are eligible to be transferred under state and federal campaign finance laws and regulations are being transferred to Elder for America PAC. We’re starting with over $1 million,” Elder said.

Elder said the PAC will focus on closing swing elections to “enable Republicans to retake the House and the Senate.”

The PAC will likewise focus on school board elections, pushing for school choice and for the “defeat” of critical race theory—an ideology that divides society into oppressors and oppressed based on race.

“We’re also going to campaign against soft-on-crime DAs and for common sense criminal laws that put bad guys behind bars for the length of time consistent with the seriousness of the crime committed,” Elder said.