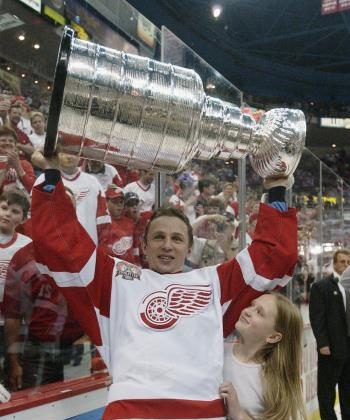 By Rahul Vaidyanath
FONT BFONT SText size
Print
Igor Larionov, an elegant center who became a road map for future Russian hockey players in the NHL, was most deservedly named as one of the 2008 Hockey Hall of Fame inductees on Monday.

Larionov embarked on what would become a 14-year career in the NHL after already achieving superstar status for the former Soviet Union.

He first caught my attention as the center of the “KLM” line between wingers Sergei Makarov and Vladimir Krutov for the Soviet Union in the 1981 Canada Cup at age 20.

With defensemen Slava Fetisov and Alexei Kasatonov, the “KLM” line would form the most fearsome unit in hockey. It didn’t hurt having Vladislav Tretiak as your goalie, either.

The Soviet Union blew away Team Canada 8–1 at the Montreal Forum to win the ’81 Canada Cup, which was, at the time, the world hockey championships featuring the best six hockey countries. Larionov scored the opening goal in that game.

Larionov had fought against the harsh communist system and his national team coach Viktor Tikhonov, as he was forced to live in military-style housing away from his wife. He would become a trailblazer for other Russian hockey players to join the NHL.

He had already won two Olympic gold medals and four world championships prior to being allowed to sign with the Vancouver Canucks in 1989 at the age of 29.

But it was eventually with the Detroit Red Wings that Larionov would realize most of his success in the NHL. Key to this success was joining a team with a commitment to playing hockey like the Soviet Union did in the 1980s—a game built on puck possession, finesse, and passing.

In Detroit, Larionov would be reunited with Fetisov and young Russians including Sergei Fedorov. Legendary coach Scotty Bowman would often play five Russians together as a unit. In the all red Detroit home uniforms, it was as if other teams were up against the Soviet Union.

Former Detroit Red Wings forward Kris Draper summed it up perfectly for the Detroit Free Press, “I’ll never forget the Russian Five when they first started playing together. We couldn’t believe they were playing on the same ice as we were, playing against the same guys, and yet they were so different, especially Igor with the puck. Unbelievable passer.”


Larionov won his first Stanley Cup with the Detroit Red Wings in 1997, beating the Philadelphia Flyers. The Wings repeated the feat the following year before Larionov was released and allowed to become a free agent at the age of 39.

The man called “The Professor” by his teammates would return to the Wings after an unsuccessful stint with the Florida Panthers. To call the 2001 Red Wings a veteran team would be an understatement, but they won another Stanley Cup despite their age and Larionov became the oldest player in NHL history to score a Stanley Cup finals goal at the age of 41.

About Larionov, Detroit’s best defenseman Nicklas Lidstrom told the Detroit Free Press, “It was fun playing with him because he was so good with the puck. He was just a very, very smart player.”