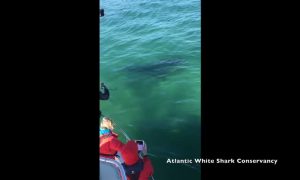 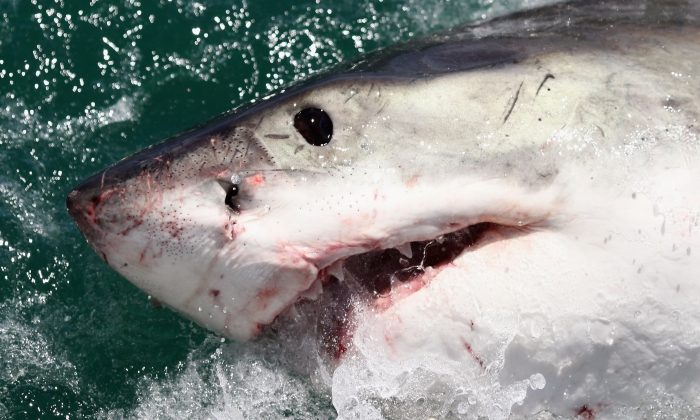 A Great White Shark is attracted by a lure in Gansbaai, South Africa on Oct. 19, 2009. (Dan Kitwood/Getty Images)
US News

For over a month, the Atlantic’s Great Whites weren’t giving Captain Chip’s chum any attention. Skeptical, and driven nuts by an ineffectual 40 hours of chumming, he fed the ocean his mix of fish guts and blood once again. And to his disbelief, they tagged the largest great white ever tagged in the Atlantic Ocean—approximately 2,600 pounds, and “almost as wide as the boat.”

The great catch did not come alone. Six others were caught, and four total were tagged, according to the captains Facebook page, Outcast Sport Fishing. Pictures of the mighty whites were posted posing in their best Jaws impersonations.

Gannets eye view last weekend of us popping the hook out. Can’t remember which one this was, though. Thanks to Taylor with Salt Creek Outfitters for the shots and jumping on the rod when we needed.

Only one female was caught and the rest were males, including the one-ton giant. In one of the captain’s posts, he explains that female sharks are usually much larger than their counterparts. He then shared a captain’s tale of three 3,000 pound females that they caught in the past.

Amazing day. Hooked 7, tagged 4. I haven't seen a great white shark in over a month. We had a cold snap mid-Dec and…

This South Carolina crew also has a heart for both man and fish. The one female that the crew caught weighed 1,500 pounds, and when she surfaced, she greeted the crew with more than just a pair of dark, ominous eyes and a toneless smile: seal scratches covered her face. She was quickly released.

Last year over the summer, a great friend of the captain lost his daughter in a car accident, and the great white was given a name, in memoriam of the girl: Charli.

“We named her after a great friend’s 11-year-old daughter … As it seems, they were both born around the same year,” stated the post.

Comments grateful for the captain’s compassion were left on the post, and others thought that naming the shark was a kind gesture. To be clear, the captain only catches, tags, and releases the sharks. According to one of the comments, which the captain liked,  releasing them is “a sign of prosperity” to the crew.

Taylor Horton, with a shot of Charli last weekend. The shark has the technology to tell us her exact track, depths, temperatures and daily routine.

A Captain Does Not Reveal His Secrets

The captain stated that he made the record-breaking catch in a spot that he never tried before. His luck was dry, so he gave the new waters a shot—and met with success. Of course, fearing that 50 boats would relish in his fresh waters, he wasn’t willing to share the location in the comment section—a true shark whisperer, and businessman.

“To keep it simple; Captain Chip loves what he does,” states the Outcast Fishing website. “His commitment is to provide memorable and exciting sport action with a laid back attitude is what lead’s Capt. Chip to have one of the highest repeat businesses in the area.”

Taylor Horton with Salt Creek Productions getting a sunrise while we set up for Jaws.

To track Charli and other great whites, you can download the Sharktivity app.